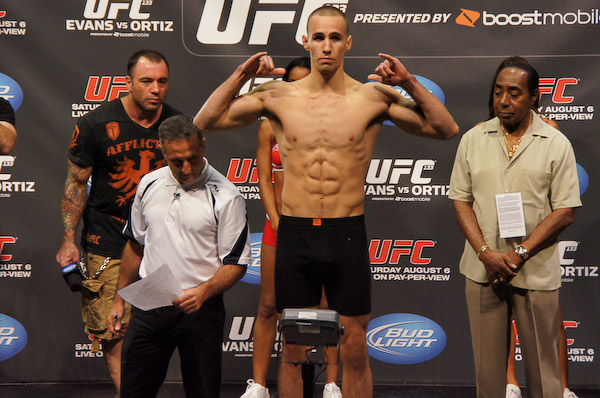 Rory MacDonald was dominant in his UFC on Fox 5 win over B.J. Penn, but he drew the ire of some fans for doing a shuffle in the cage that was apparently seen as a taunt.

“I can’t believe people perceived it that way,” Zahabi told the Sherdog Radio Network’s “Beatdown” show on Wednesday. “It makes no sense to me because the shuffle is a technique. It’s a way to draw your opponent’s attention. Rory did the technique three or four times, and he followed it up with a superman punch. It’s exactly what we drilled. He was trained to do that. He was not just doing it to showboat. He was doing it to execute a strike.”

Although MacDonald and Penn traded words before the bout, Zahabi insisted that his fighter respected the former lightweight and welterweight champion. In fact, Zahabi was worried MacDonald might even respect Penn too much.

“That was a big concern that [MacDonald] would be a deer stuck in the headlights because you’re fighting a guy who’s got such an aura about him,” Zahabi said. “It happened to Georges [St. Pierre] the first time he fought Matt Hughes. Rory knew not to fall for that, just to fight him like he’s anybody else and not to show too much respect in terms of fighting, but we made sure to show him all the respect in the world in terms of a fighter who paved the way. He paved the way for many great fighters.”

Penn showed his heart in going the 15-minute distance, but MacDonald was in control throughout before capturing a unanimous decision. On the feet, he battered the Hawaiian with elbows and vicious body shots.

“I really think you have to take away the boxing from B.J.,” Zahabi said. “If you don’t take away his boxing, you’re dead. You’re dead in the water because taking him down and holding him down is not an easy thing to do. Rory has different tools than Georges St. Pierre. We had to use a different strategy for him, and definitely the elbows, I really feel, is what turned the tide.”

Now MacDonald appears headed for a rematch against Carlos Condit in March at UFC 158. Condit won the first encounter in June 2010, but he had to rally to get the win. Zahabi expects the matchup to be one of the best fights of 2013.

“For sure [Condit is] going to bring new things to the table, but the time is a little short for that,” Zahabi said. “I think he’s going to have to do what he’s good at doing now. The backbone of his game is going to have to be the same, I think, and I think Rory’s going to be extremely ready for that.”