TOKYO -- Eight years to the day of its first card, Zst returned to Differ Ariake in Tokyo to crown its first flyweight champion and to stage plenty of its trademark tag-team action at Zst 26. 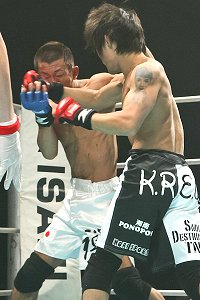 T. Irei
Ryosuke Tanuma's knockout
took less than two minutes.
In the clinch, Tanuma assaulted Yajima with punches and the occasional sharp knee to the face, bloodying his nose. Tanuma kept up the assault, dirty boxing Yajima up against the ropes where Yajima eventually dropped to his knees.

Looking to keep the fight standing, Tanuma quickly retreated to the center of the ring, but a shaky Yajima could not get to his feet, prompting referee Yoshinori Umeki to step in and call the bout at 1:58 of round one.

“I thought that if I won the title, I'd cry,” said Tanuma after the bout. After receiving praise from his chief cornerman, Shooto 132-pound world champ Shuichiro Katsumura, Tanuma did become misty-eyed.

“It's like it's the time to cry,” Tanuma said. “Katsumura has been really good to me. I don't have much experience, but he made me a coach in the gym; he gave me experience.”

Zst now joins Shooto and Pancrase as prominent Japanese regional promotions which have crowned champions in the growing flyweight division.

Though tag-team MMA is an idiosyncratic Zst staple, this bout was special in that ringside judges -- a rarity in Zst -- would vote one fighter off at the end of each round if none were eliminated by knockout or submission.

Kawana and Matsuda began the bout against Yamamoto and Sato. After a competitive opening round, the judges favored the blue corner, with Kawana opting out of the bout. Replacing him from backstage, Toriyama entered the second frame after a strategic tag that saved Matsuda from a Yamamoto heel hook. Toriyama finished Yamamoto with a rear-naked choke at the 3:20 mark, eliminating him from the bout. 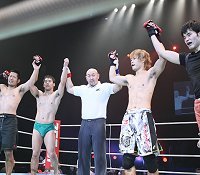 T. Irei
Sato, Yamamoto, Tadashi and Ueda
prevailed in the tag survival.
The teams split the third and fourth stanzas, with the blue corner’s Matsuda and red corner’s Sato each being eliminated after judges’ decisions. The final round would come down to Ueda and Hirayama, who earned their teams those respective rounds by threatening with submission attempts. In the end, it was Ueda who was able to spend more time on top, punching away to the body of Hirayama to earn the judges’ nod and the win for the red team after 25 chaotic minutes.


Though it had its fair share of strategic -- and comedic -- tags in and out of the ring, both Shootors easily controlled the fight on the canvas. Oishi locked Sugita up in the mount to drop body punches and the back mount to threaten with the choke while Katsumura attacked Shimizu with leglocks. However, the Shooto duo couldn't get a finish, and thus, had to settle for the automatic draw.

Suzuki racked up hard low kicks, stinging jabs, and crushing knees on the hapless MMA neophyte. Shelton was clearly out of his element as he was unable to correctly gauge the distance of his punches, missing at both long and close range.

Shelton also appeared to have little grappling experience, wrapping his arm around Suzuki's head in an attempt to clinch. Suzuki finally crumpled the beaten Shelton with a one-two combo in the corner of the ring. The official time was 4:29 of the opening round.

Shelton was stretchered out of the arena and taken to the hospital. At the post-fight press conference, Rings founder Akira Maeda expressed disappointment in the booking of Shelton, claiming, “Suzuki's opponent should have been much better.”

Masayuki Okude put Teruhiko Azumaya away at 4:32 of the second round with an armbar, after a bevy of earlier footlock and armbar attempts.

Shin Katayama and Yusuke Uehara put on a high-paced display of grappling, scrambling for submissions all the way to a time limit draw.

Yoshitaka Abe and Shinya Irei fought a similar ground war, but in the footlock battle, it was Abe who won out, forcing Irei to tap to a heel hook at 2:29 in the first round.

In the first half of the evening -- the 39th installment of Zst's Swat! series -- absurdity struck in a 125-pound affair between Satoshi Shinbori and Fumitaka Iizuka, when Iizuka appeared to knock himself unconscious while trying to pull guard. Shinbori then went for an awkward, half-hearted armbar on the limp Iizuka until referee Masato Fukuda halted the bout at 4:04 of the first round, giving Shinbori the unusual win.

Kuniyoshi Hironaka student Yoshinari Shinba forced Kaiki Tamiya to tap to a rear-naked choke at 4:08 of their 125-pound bout.

In the evening's MMA opener, Yasuhiro Ebisawa punched out Osamu Mori at 1:56 of the first round in their welterweight affair.