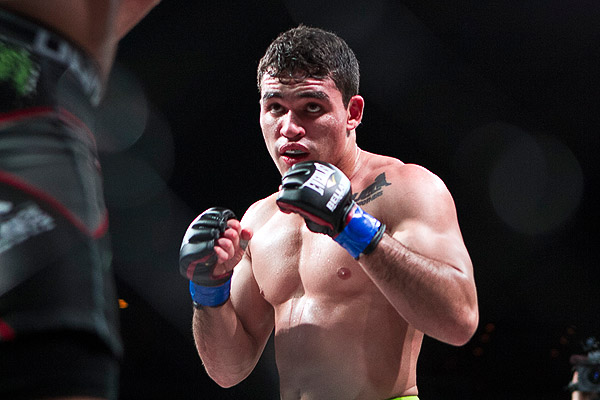 In a matter of hours, Patricky Freire will step into the Bellator Fighting Championships cage to compete in arguably the biggest fight of his life.

Standing across from “Pitbull” will be Eddie Alvarez, Bellator’s inaugural lightweight champion and the former face of the promotion. When Freire meets Alvarez tonight at Caesars Windsor Hotel and Casino in Windsor, Ontario, the Brazilian will carry with him the memory of his striking coach and mentor, Bruno Gouvea, who died in a car accident on his 32nd birthday this past April.

“Bruno is a guy who will always be with me in my corner during my fights,” Freire recently told Sherdog.com. “I will always have his strength, and every time I fight, I think I [will] hear him giving me advice.”

One could hardly pick a more pressure-packed setting for Freire in his first fight since losing Gouvea. Alvarez is viewed by many as a Top-15 talent at 155 pounds, and the Pennsylvanian will likely be looking to make waves in the final fight on his current Bellator contract. However, although Freire says he respects Alvarez’s skills, he believes he sees overconfidence in the former champion that will lead to his defeat.

“[Alvarez] is a tough fighter. I want to test myself against him,” said Freire. “He thinks of himself too highly. [I think this] because of the way he looks at us fighters. I think he is so self-confident that that is why he lost his belt. That was his mistake.”

Since relinquishing his title to Michael Chandler last year in a “Fight of the Year” nominee, Alvarez has competed just once, emphatically avenging a 2008 loss to Shinya Aoki by blasting the “Tobikan Judan” at Bellator 66 back in April.

“I think he is going to try to mix his boxing and wrestling and try to tire me out, because he thinks that is my weakness,” Freire said of his headlining clash with Alvarez, which airs on MTV2. “But I think I will be dangerous to him with my boxing and jiu-jitsu.”

Freire is a two-time tournament veteran who entered Bellator with much hype but has yet to capture a tournament title. In his most recent in-cage appearance, Freire was bounced from the Season 6 tournament by underdog Lloyd Woodard, who ended the fight by cranking on a kimura early in the second round of their Bellator 62 bout. When “Pitbull” refused to tap, his elbow gave way.

“I focused more on my wrestling than my jiu-jitsu, but that does not mean that I stopped training jiu-jitsu [before that fight]. I knew that [Woodard’s] finishing skills would come via guillotine or [bent arm lock]. When he attacked my arm, I thought I was ready for that. I was confident I would get out because I was already expecting it, but then he broke my arm,” Freire said of the defeat. “I got pretty embarrassed at myself, because I come from jiu-jitsu. I got very emotional during that fight. I think that was my mistake, and I hope that this time I can act more rationally.”

Freire also hopes that the support of his brother and longtime training partner Patricio will help him return to his winning ways against Alvarez.

“It’s like [Patricio and I give each other] extra motivation. We joke around. When one of us gets a knockout, the other one says that he will get a knockout, too. But it’s not [serious] competition,” said Freire. “They are just jokes between brothers, but Patricio said that if I knock out Eddie Alvarez that he is going to knock out Pat Curran. When we joke about getting the knockouts is when we give our best performances and deliver the most beautiful knockouts.”

The Woodard loss now behind him, Freire looks to gather some much needed momentum heading into a potential Season 8 lightweight tournament. Beginning in 2013, Bellator will air live on Spike TV, the former longtime broadcast partner of the UFC. Provided he can string together some victories, Freire is a man some view as a potential star for the company as it reaches a new audience, but the fighter says that becoming a household name is not his primary concern. Though Freire is grateful for Bellator’s audience exposure upgrade, he is still most concerned with performing well in the cage.

“I hope we can get better sponsors and that people look at us more than they are right now. Everyone is much more focused on the UFC, but Bellator has pretty good fighters, as well,” said Freire. “I’m happy that people are liking what I do, but all that matters to me is that my work is recognized. Whatever comes from that is great, but I don’t think about it.”