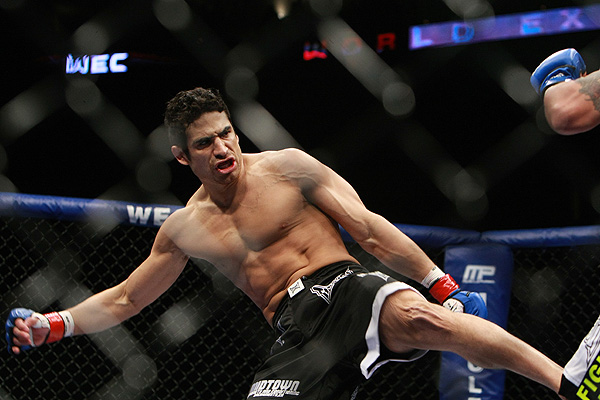 Danny Castillo’s UFC career is certainly off to a successful start.

After upsetting Joe Stevenson in his Octagon debut in March 2011, the Team Alpha Male product has added three more wins to bring his UFC record to 4-1. He’s getting better, and he thinks fighting in the sport’s top promotion only helps.

“It forced me to step my game up,” Castillo told the Sherdog Radio Network’s “Beatdown” show. “It’s just awesome to be a part of such a great organization … . Being the number one show in the world, it makes me more motivated. Not to mention the lightweight division is the toughest division in the whole world, in my opinion. There’s a lot of killers in that lightweight division. If I’m not training my butt off and if I’m not working as hard as I can, then there’s a strong possibility you can get knocked out in the first round within seconds.”

Castillo’s most recent win came Saturday at UFC on Fox 3. He earned a unanimous decision over John Cholish (30-27 on all three cards).

“I wasn’t really sure what to prepare for, but I knew that jiu-jitsu was his strong suit and so was wrestling,” Castillo said. “I have some of the best wrestlers in my camp that fight in MMA. That wasn’t really a factor. The kneebar was something I was worried about because it seemed like he was really good at that, and I believe he has five submissions out of eight wins. That was something I was trying to work on.”

Cholish tried a kneebar in the third round, but he couldn’t pull off the finish. Castillo’s focus on submission defense paid off, though he wasn’t entirely happy with his performance.

“I was a little disappointed in the standup aspect of the game,” Castillo said. “I was really confident going in there and I wanted to just really exchange with him, but every time I got set to drop a combination, I felt like he was out of the way. He had awesome footwork. My hat’s off to him. John Cholish is a tough dude.”

The competition will only get tougher if Castillo continues to climb the ranks. He knows it, too. Just days after beating Cholish, he was back in the gym.

“I’m more motivated from a win than anything,” Castillo said. “I’m already thinking of different plans of attack for my next camp. Don’t know who I’m going to be fighting, but the all-around goal for me is to work my butt off and get as much better as I can in all aspects of MMA.”

Listen to the full interview (beginning at 13:40).