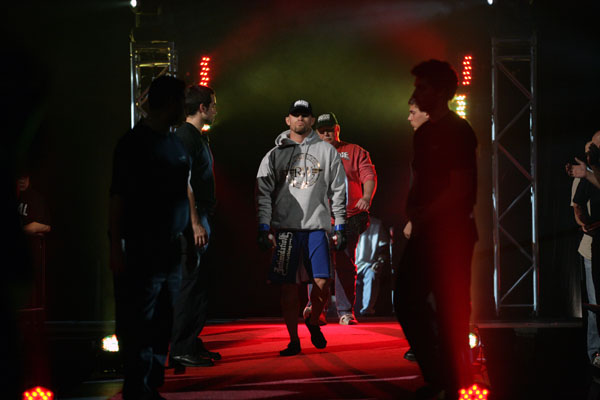 Daron Cruickshank was more than impressive Dec. 8 at UFC on Fox 5, dominating Henry Martinez on the feet before finishing him with a head-kick knockout.

In a recent interview with the Sherdog Radio Network’s “Beatdown” show, Cruickshank credited his father for his striking skills, discussed his future and more.

On his parents being martial artists: “Ever since I could remember, my parents taught class and I was always running around in the gym doing martial arts. My mom, she was a professional kickboxer and I saw her fight back in the day just in little shows and stuff. I just grew up around it. I picked it up. The best thing about my growing up with it is my parents really didn’t make me do it. When I was in the gym, it was because I wanted to be there. They never forced it on me, and I was able to have fun with it.”

On whether he always wanted to become a mixed martial artist: “I really wanted to do it when I was in college. When I was wrestling, it was the Matt Hughes era when he was going undefeated, the world champ for a long time. That’s kind of what made me like, ‘Yeah, that’s what I want to do. I want to do that after I’m done wrestling.’ I would train during the summers when I would come back from school, but nothing real serious. Once I was done wrestling and kind of having to move on, I really hit it hard.”

On his striking training: “I have to travel to find sparring partners, and as far as technical striking and all that, I work out at my house, in my garage, with my dad. That’s where I’ve grown up. That’s where it goes down.”

On whether he’d consider a move to a bigger camp: “I’ve been to these big gyms and I’ve checked them out. The good thing about these gyms is yes, there’s a lot more talent in one room at a time, but technically, I don’t get what I get at home from anybody else. My dad’s my striking coach. He has everything that he’s done in his past. He came about when the JKD era was around and it was big. That’s when mixed martial arts really, I believe, came together, with Bruce Lee and putting it all together and trying different arts and that philosophy. That’s where I get my stuff from is my dad. My dad’s about to be 60 years old. I don’t have that much more time with him. I want to take as much as I can learn from him as possible. If I go out and move to Arizona or California or Vegas, then I’m not going to be able to get that.”

On his win over Henry Martinez: “He’s a tough dude. When they gave me the name Henry Martinez and [asked] would you want to fight him, my dad looked him up and was like, ‘He’s Mexican and he’s going to be tough. He’s going to be able to take a shot.’ That’s basically what happened. The guy can definitely handle some shots. For me, I don’t pride myself on being able to take a hit. I pride myself on not getting hit and being able to hit.”

On what he wants to accomplish in 2013: “I would like to try to get maybe four fights in the year and work my way up the ladder.”

Listen to the full interview (beginning at 56:05).