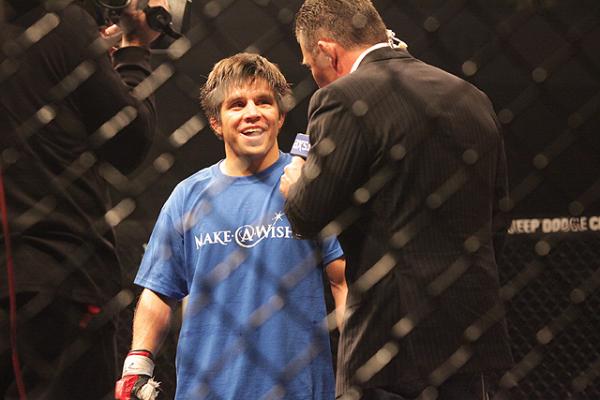 Henry Cejudo will not compete in the UFC at 125 pounds. | Photo: Robert Lopez/Sherdog.com


The Ultimate Fighting Championship debut of Henry Cejudo at flyweight will never happen according to UFC President Dana White.

During an interview following weigh-ins at Sleep Train Arena for UFC 177, White was asked about what will happen with Cejudo following the former Olympian withdrawing from his 125-pound tilt against Scott Jorgensen due to medical reasons on Friday.

“He’s [Cejudo] going to have two options, he can move up in weight or not stay here,” White said.

Cejudo is unbeaten in six bouts since making his pro debut in March 2013, including victories against Ryan Hollis and Elias Garcia while competing for the Texas-based Legacy Fighting championships. However, Cejudo has failed to make weight for both of those bouts.

In addition, he withdrew from a proposed clash with Damacio Page at Legacy FC 31 for personal reasons, while a bout with the stomach flu forced him out of a co-headlining appearance at Legacy FC 25.

It remains yet to be seen what Cejudo will do following the withdrawal on Friday, but if he is ever to set foot inside the Octagon, it will be at 135-pounds.
SHARE ON FACEBOOK SHARE ON TWITTER
Related Articles
Latest News
+ VIEW MORE