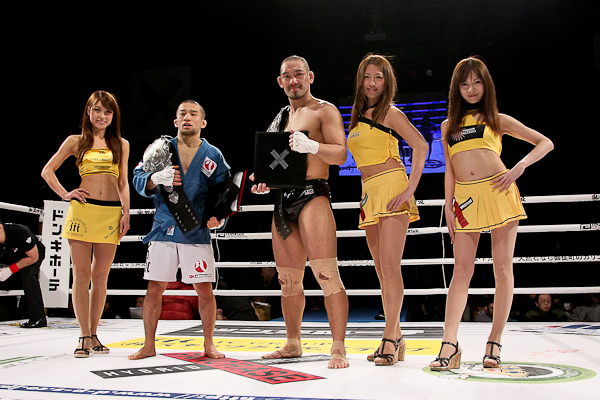 TOKYO -- In a Friday press conference, former pro wrestling promotion Smash officially announced its takeover of Pancrase from Japanese retail giant, Don Quijote. Despite the transfer in management, Don Quijote will remain involved with the promotion as a major sponsor.

Smash CEO Masakazu Sakai will inherit the media-facing and advisory role of Pancrase representative from active Pancrasist and Pancrase executive manager Ryo Kawamura (pictured: center). Sakai's experience in the MMA world is an eclectic one, ranging from an advisor in Pride FC sister pro-wrestling promotion Hustle, to serving as a facilitator for Yokohama Baystar's Katsuaki Furki's crossover into MMA. Most recently, Sakai has been involved in the operations of the Amateur Deep circuit as well as serving as commissioner for the Deep-backed Japan MMA League.

The new Pancrase regime also announced lofty plans to evolve the promotion toward a "global standard" while promoting its athletes toward the international stage. These plans include the creation of an in-house agency to manage Pancrase fighters and their sponsorships abroad, the creation of a Pancrase USA infrastructure to facilitate stateside travel and accommodation for fighters, and an outreach program to promote cooperation between Pancrase and MMA gyms outside of Japan.

Last but not least, Pancrase under Smash's leadership will also see the introduction of cage events--like Deep and Dream, before it. According to Sakai, Pancrase will attempt three cage shows in 2013 with the aim of familiarizing Pancrasists with the fighting surface.

This is not Pancrase's first attempt at remodeling itself to adhere to a more Unified Rules-friendly format, as the promotion transitioned to the use of unified rules weight classes in 2008.