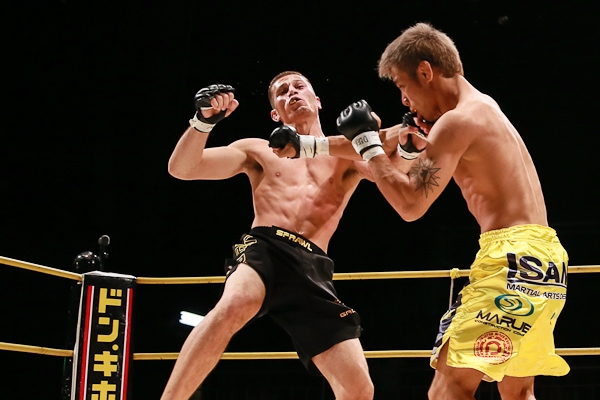 TOKYO -- Despite a scary encounter with a kick below the belt early on, former Sengoku featherweight champion Masanori Kanehara needed only one round to dispatch of Guam's Tony Reyes in their bantamweight main event at Deep Tokyo Impact 2012 inside Differ Ariake.

"When I got hit with the low blow I thought I was finished, but as the main event fighter I knew I couldn't give up," said Kanehara after the win, which moved him to 20-10-5 in his career. The outmatched Reyes falls to 5-5 with the defeat.

The kick to the groin was the first significant strike of the fight, coming only less than a minute into the bout. The original Sengoku ace took his time recovering, but came out eager to pick up the pace. The beginning of the end came when Reyes through a lazy kick to the body and Kanehara countered with a hard right straight that sent the Guamanian import reeling backwards. Reyes managed to stay standing, but Kanehara chased him around the ring, consistently landing hard right hands until one finally dropped him. The Paraestra Hachioji standout quickly pounced on Reyes and attacked with hammer fists until Umeki stopped the action at the 4:28 mark.

After his victory, Kanehara confirmed that he's aiming for a world-level win and a UFC contract, explaining this to be the reason that Deep brought in a foreign fighter to face him. 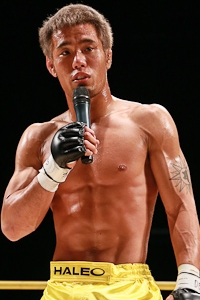 Taro Irei
Kanehara wants a UFC deal.
Deep lightweight mainstay Juri Ohara earned a first round knockout victory over ZST veteran Genki Osako. Ohara used his superior reach to keep Osako at a distance and land crisp 1-2 combinations. The lanky Ohara bloodied up Osako's face before wobbling him with a stiff combination. The finishing blow was a single right straight that put Osako to sleep at 4:04 of the opening frame.

In bantamweight action, Shooto veteran Naohiro Mizuno fought his way to a Unanimous Decision win over Toshinori Tsunemura. In round one, Mizuno controlled the fight on the ground, latching onto a d'arce choke that Tsunemura eventually escaped. In the second frame, the fight take place standing up as Mizuno got the better of wild exchanges and stuffed Tsunemura's takedown attempts. In the end, judges Oshiro, Umeki and Fukuda all scored the bout in favor of Mizuno, who picked up his 10th career victory.

Elsewhere, lightweight Kenjiro Takahashi put in a dominant performance against Tsuyoshi Kosaka pupil Ryosuke Togashi. After three minutes of wild punching exchanges, Togashi was tagged with a huge right hook that sent him to the canvas. Takahashi followed through and pounded on his dazed opponent, but Togashi somehow survived and returned to his feet where Takahashi proceeded to chase him around the ring and clobber him with huge haymakers. In the second round, Takahashi came out ready to finish things and it took him only 18 seconds to do so. Another huge hook sent Togashi to the canvas where Takahashi threw in a few more punches before referee Kenichi Serizawa pulled him off and stopped the fight.

Paraestra Matsudo's Hikaru Hasumi took Katsuyoshi Beppu to the final bell in a close featherweight bout. Cobra Kai's Beppu controlled the early bout with takedowns and multiple attempts at taking the back that were foiled by ring ropes. Beppu eventually made it to mount, where he attempted an armbar, but was cut short by the bell. In the second, Hasumi managed to fend of the takedown attempts from Beppu and wobble him with multiple punch combinations. After 10 minutes of action, judge Yoshinori Umeki scored the bout for Beppu, though judges Serizawa and Fukuda disgreed and gave the nod to Hasumi who took the split decision win.

Koichi Ishizuka made quick work of Yasufumi Suzaki in their bantamweight matchup. Ishizuka quickly locked up a triangle, eventually rolled his foe over and landing in a mounted triangle. Instead of working to finish the submission, however, Ishizuka chose to pound out his opponent, prompting referee Moritaka Oshiro to step in at 2:58 of the first round.

In another bantamweight bout, Yuto Takemoto outpointed Hayato Sakurai student Nobuhito Irei after two rounds of fighting. The Laughter7 fighter controlled the bout with takedowns and effective positioning, taking mount in the first round and punishing Irei with punches. Judges Serizawa and Oshiro saw the bout in Takemoto's favor, though judge Umeki saw the fight as a draw.

In a foregone conclusion, Yusuke Kanaeda earned his second career victory when he submitted debuting Thai fighter Pakaasi Weerasakreck with an arm-triangle choke at just 1:57 of the first round.

Lightweight Yuta Kaneko also earned himself a first-round stoppage when he pounded out Yoichiro Toriyama at 2:37.