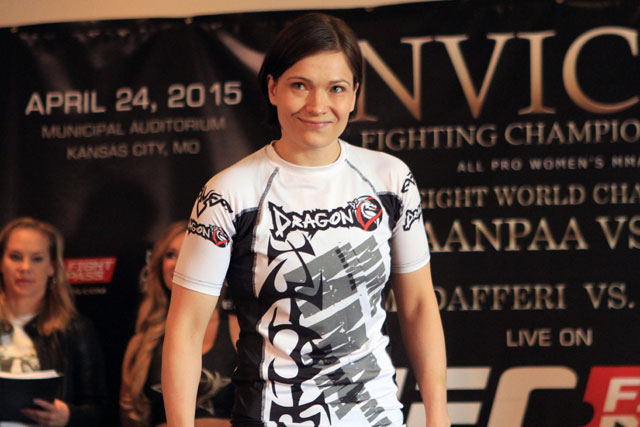 Katja Kankaanpaa leaves the sport with a record of 10-3-1. | Photo: Jeff Sherwood/Sherdog.com


It appears Katja Kankaanpaa’s 14th mixed martial arts bout will be her last.

“Yesterday’s match will be my last one,” Kankaanpaa wrote on Facebook. “Now it’s time to take it a bit easier. I will write more specifically about this once I’ve returned to Finland. Thank you for all the support I’ve received from all of you.”

Kankaanpaa, 34, came up on the wrong end of a controversial unanimous decision on Saturday night. The “Killer Bunny” worked to push the pace and scored numerous takedowns throughout her 15-minute encounter with Bennett, who apparently swayed the judges by working for submissions off her back. Sherdog.com’s unofficial scorecard gave the fight to Kankaanpaa by a score of 29-28, but all three cageside officials saw the bout 29-28 in favor of Bennett.

A karate stylist who also holds a purple belt in Brazilian jiu-jitsu, Kankaanpaa went undefeated through the first nine bouts of her career. After being defeated by Joanne Calderwood in December 2013, the Finn rebounded in her next Invicta appearance by submitting Stephanie Eggink to claim the promotion’s vacant 115-pound belt. Her subsequent losses to Livia Renata Souza and Bennett marked the first losing streak of Kankaanpaa’s career.