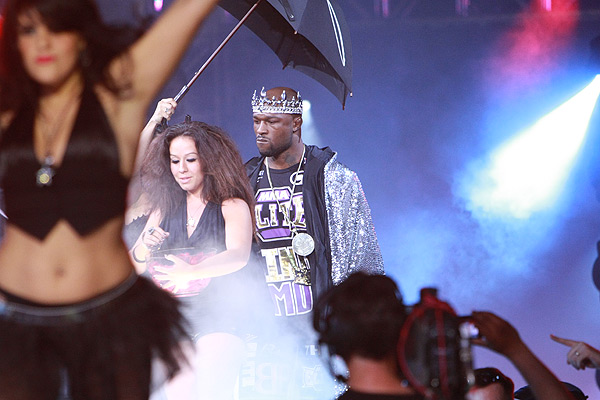 
When Muhammed Lawal returns to competition, he will be a two-sport athlete.

Sherdog.com confirmed with sources close to the situation on Wednesday that “King Mo” is expected to sign with both Total Nonstop Action Wrestling and the Bellator Fighting Championships in the near future. According to Sherdog’s sources, the former Strikeforce light heavyweight champion will likely perform simultaneously for the professional wrestling organization and the Chicago-based MMA promoter. Details surrounding the deals were not revealed.

It is currently unknown when Lawal will debut with the organizations, but any athletic participation from the fighter will likely come down the road, as Lawal is still recovering from knee surgery and a serious battle with staph infection.

Lawal is currently serving a nine-month suspension handed to him by the Nevada Athletic Commission after he tested positive for the anabolic steroid Drostanolone following his Jan. 7 technical knockout of Lorenz Larkin. The former NCAA wrestling standout explained to the commission during his disciplinary hearing that an over-the-counter supplement was the cause of his positive test, but the explanation did not sway the commission’s verdict. In addition to his suspension, Lawal was also fined a total of $39,000 and saw his victory over Larkin changed to a no-contest.

During the proceeding, commissioner Pat Lundvall presented a line of questioning to which Lawal took exception, asking the fighter if he could read and understand English in regard to his signed pre-fight questionnaire, which required him to list any supplements taken or injuries sustained. Following the meeting, Lawal vented his frustrations with the query on Twitter, referring to Lundvall as a “racist bitch.”

In light of the comment, Lawal was released from his Strikeforce contract on March 27. Lawal later issued an apology to Lundvall for the comment. While it was rumored briefly that the 31-year-old might wind up back in the Zuffa fold, that hypothetical has gone by the wayside for now.

Now owned by Viacom, Bellator currently airs on MTV2 but will move to Spike TV in 2013. The promotion is currently wrapping up its ongoing sixth season and plans to hold its first Summer Series event on June 22. TNA Wrestling was founded in 2002 and airs programming every Thursday on Spike TV.