WOODLAKE, Calif. -- Doug Marshall rebounded from his recent loss to Giva Santana, and he did it in impressive fashion.

Marshall and Richard Blake met in the main event of Twilight Fight Night “Numero Uno,” and the former WEC ace countered a punch from his opponent with a single right that put him down and out just 21 seconds into the contest. Blake lay stretched out on the mat as Marshall climbed the cage and the hometown crowd cheered the local favorite.

Former K-1 kickboxing talent Carter Williams needed only 13 seconds to dispatch journeyman Ruben Villareal. Williams stormed out and landed a low kick that caused “Warpath” to stumble backward swearing. Williams then attacked with punches, dropping his prey, who turtled up and showed no signs of defending himself. 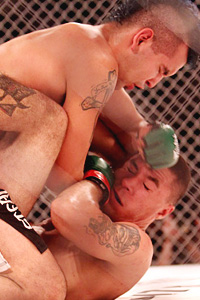 J. Sherwood
Quinones (top) outlasted Vidal.
Carizosa escaped a tight looking armbar in the first, and then began pulling away. Romero found himself on his back throughout the match, throwing up armbar attempts that never again came close. By the third frame, Carizosa looked dominant pounding away from side control. Romero hung on, but could mount no effective offense. In the end, the judges scored it 30-27 (twice) and 29-28.

Sergio Quinones outlasted Anthony Vidal to clinch a unanimous decision. Vidal threatened early with a tight triangle that he turned into an armbar, but after round one it was all Quinones’ superior takedowns. Vidal was a threat on the feet, but he had no answer to the stifling top game of Quinones. All three judges warded the fight to Quinones with matching 29-28 scores.

Joey Cabezas defeated Steve Ramirez via submission from an armbar in a sloppy but entertaining affair. Ramirez was game and threw bombs throughout, but ran out of energy in the third. Cabezas was taken down again and again, but kept finding ways to escape and roll out of dangerous positions. The finish came at
1:12 of round three.

Art Becerra and Chris Brady went toe to toe for three rounds. Becerrea walked away with the decision win with 29-28 scores across the board.

Mike Christensen began the night’s action submitting Brandon Anderson with an Americana at just 1:19 of the opening period.