In the evening’s main event, featherweight Jacob Kirwan made it 2-0 on the night for the Kirwan family, submitting Ryan Vaccaro via guillotine in just 86 seconds to become ROC’s featherweight North American champion.

After being taken down, Kirwan managed to get back up to his feet. With Vaccaro still in position for another double-leg takedown, Kirwan pulled guard and slapped on a guillotine, forcing the tap from Vaccaro. With the win, Kirwan, who trains out of Ferocity MMA in Frederick, Md., moved his record to 8-2. 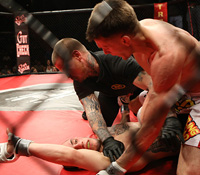 Deangelis outworked Pague on the ground to start the fight and looked fit to dominate proceedings on the ground. However, in round two, Pague came out on fire, taking the bout to his fellow lightweight. Countering a low kick, Pague answered back with a huge right hook that knocked Deangelis out cold just 25 seconds into the second frame.

The win was the fifth straight for the 23-year-old Pague.

Late in the opening stage, as Daniels pushed for takedown against the fence, Miglioli threw a hard knee to the downed Daniels that opened up a cut, and enraged TUF 12 vet and Daniels cornerman Marc Stevens. After a doctor consult Daniels was deemed unfit to continue, and since the stoppage came from an illegal strike, Daniels was declared the winner by DQ at 4:27 of the first round. 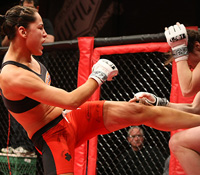 Following the bout, Sherdog.com learned that a Daniels-Miglioli rematch is likely for Ring of Combat 35 on April 8.

In a bout for the vacant ROC North American 130-pound women’s title, 24-year-old unbeaten prospect Jessica Eye ran over late replacement Ashley Nee, who replaced an injured Justine Kish. Eye wasted little time, plowing Nee from the opening bell. Eye was connecting with almost everything she threw and forcing referee Keith Peterson to finally stop the bout at 4:34 in the first as the Parma, Ohio, native pummeled Nee along the fence.

In the most pressing bout of the undercard, TUF 11 vet Costantinos Philippou defeated Team Tiger Schulmann product Uriah Hall by majority decision in a foul-filled contest. 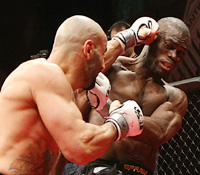 K. Mills
Philippou (left) may have earned a
title shot with his win.

Early in the contest, Philippou caught Hall in the eye and in the groin, prompting respites from referee Dan Miragliotta. In the second frame, Hall returned the favor with a series of low blows to Philippou, though neither fighter was deducted a point.

The Serra-Longo representative won the bout on the back of hard single punches and well-timed takedowns that allowed him to shut down Hall’s big-kicking offense. After three four-minute rounds, judge Vincent Sinclair scored the bout a 29-29 draw. However, judges Cardo Urso and Michelle Agustin saw it 29-28 for Philippou, who took the majority decision.

With the win, Philippou is a likely contender for ROC middleweight champion Chris Weidman in April.

At 185 pounds, Drew Puzon started strong against Joey Kirwan courtesy of his wrestling, but early in the second round, a desperate Puzon single-leg attempt led to a fight-ending guillotine choke from Kirwan, just like his headliner brother, who got the tap at the 69 second mark.

Noah Faunce weighed in at 173.75 pounds for his welterweight contest with against Rich Ashkar, and used the weight to his advantage, shrugging off Askhar's takedown attempts and putting his foe on the floor. After three rounds, Faunce's total ground control was enough to take 30-27 scorecards across the board.

Aung La Nsang sat pretty in guard for the opening minutes of his middleweight bout with Mitch Whitesel until "The Burmese Python" swiftly took the back of his journeyman foe and sunk a fight-ending rear-naked choke 3:09 into the fight. The loss was Whitesel's fifth straight loss since last September.

Giedrius Karavackas spotted late replacement Joshua Key seven-and-a-half pounds in their 180-pound catch-weight bout, and proceedings showed he had little to fear in doing so: Karavackas quickly put the self-trained Key on the mat, and sunk in a rear-naked choke for the win at 3:31 of the first round. 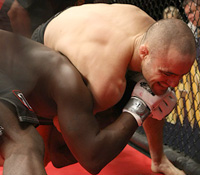 Ariel Sepulveda was on his back quickly against Steve Durig in their middleweight affair, but the native New Yorker threw up a clever triangle that forced Durig to tap at 2:24 of the first round.

At 145 pounds, Jimbo Hoffman ran over Yaser Shaukat, crushing Shaukat with a right hand, following up with punches and a fight-ending guillotine choke to earn the W in just 47 seconds.