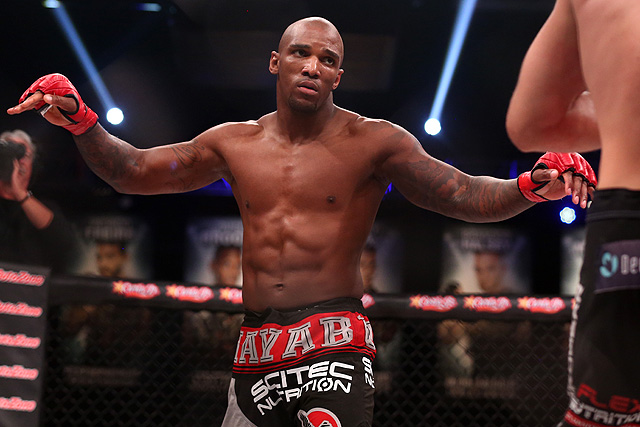 Francis Carmont is getting back to basics at 205 pounds. | Photo: Dave Mandel/Sherdog.com


For a time, Francis Carmont was a rising star in the Ultimate Fighting Championship middleweight division.

He began his promotional tenure with six consecutive wins, and although at least a couple of those were close calls -- see: Tom Lawlor, Lorenz Larkin -- the Paris native had positioned himself to make some noise at 185 pounds. His imposing physique and association with Georges St. Pierre only served to heighten interest in his ascent.

However, as the competition improved, Carmont’s performance faltered. Consecutive losses to Ronaldo Souza, C.B. Dolloway and Thales Leites led to Carmont’s UFC release and prompted some soul searching from the man known as “Limitless.” When Carmont was winning, one could overlook the fact that the in-cage product wasn’t always exciting. Once the results changed, it made it that much easier to part ways with the Tristar Gym product.

“By looking for perfection on my technique, I slowly estrange myself from the combat by instinct. Seeking to score points instead of finishing my opponent,” Carmont wrote on Facebook shortly after his release. “My last loss pushes me to grow every day.”

Now, one bout into a stint with Bellator MMA, Carmont says that process is still ongoing.

“Now, I want to fight with my killer instinct, not my game plan. You must have a game plan for different fighters. When a guy’s good at one thing, you have to focus on your striking or on your takedown defense,” said Carmont, who defeated Guilherme Viana via unanimous decision in his Bellator debut. “But now I want to focus on my game. I don’t want to focus on the guy who is with me in the Octagon... For me, [in] the past, my killer instinct was dead. Now, it’s come back. I’m ready to show the world who I am.”

A key part of Carmont’s transformation involved his decision to compete at 205 pounds. Despite his previous success, Carmont believes the focus on making weight ultimately detracted from what he was able to accomplish on fight night. That’s why he doesn’t expect that a return to middleweight is in his future.

“You don’t focus on the fight one week before, but you focus losing weight... I don’t think it’s good for the body [or] for the mind,” he said. “At 205, I don’t have a lot of weight to lose. I am focused on the fight. I feel more more confident to fight at this weight class.”

At Bellator 142 “Dynamite,” Carmont will have an outside shot at inserting himself into the light heavyweight title picture when he faces Roy Boughton in a reserve bout for the promotion’s one-night light heavyweight tournament. The winner of the bracket will become the division’s No. 1 contender, but even if Carmont doesn’t get a chance to enter the fray, he still has his eyes on the 205-pound field.

“I just want to fight good opponents, top-10 guys. You can see in the tournament they have tough guys: Linton Vassell, “King Mo” [Lawal], Phil Davis, Emanuel Newton,” he said. “These are top 10 guys in the world. I’m ready to compete with these guys.”