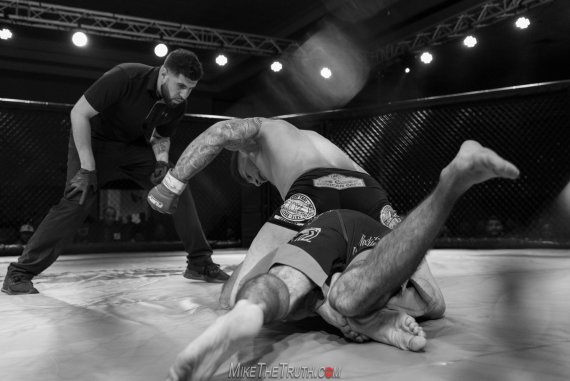 On Friday night, Daniel Pineda took less than five minutes to announce himself as a new presence in the Fury Fighting Championship featherweight division.

In the main event of Fury FC 32, “The Pit,” best-known to fans outside Texas for his seven-fight stint in the Ultimate Fighting Championship, put away Rey Trujillo via first-round punches. After a few wild early exchanges, Pineda rocked Trujillo, followed him to the ground and pummeled him from back mount until referee Joshua Ferraro was forced to intervene at 3:32. The win runs Pineda’s overall record to 25-13, including a 7-2 run across Fury, Bellator MMA and Legacy Fighting Alliance/Legacy Fighting Championship since his departure from the UFC.

In the co-main event, Warren Stewart took a split-decision win over Victor Pozas in a fight in which both men had their moments. Three back-and-forth rounds saw extended action on the ground, with both Stewart and Pozas assuming dominant positions, applying ground-and-pound and threatening submissions. The win breaks a miserable 13-fight losing streak for Warren dating all the way back to 2012, and leaves Pozas still seeking his first professional win.

In other main card action, Casey Jones tapped out Jose Guerra with a rear-naked choke at 4:31 of Round 1, then donned the trademark hockey mask and stick of his “Teenage Mutant Ninja Turtles” namesake; Andrew Sosa took a unanimous decision over Calvin Diaz in a welterweight feature; Justin Holliday made a successful professional MMA debut, stopping Patrick Greene with ground-and-pound at 2:57 of the second round; and Carlos Melara was all over Gustavo Gomez, taking his back within seconds and not letting up until he secured the tap via guillotine choke at a mere 1:02 of the first round.

In the amateur prelims, Isaac Moreno crushed Anthony McBride with strikes from top position at 1:41 of Round 1; Jacob Bradley Williams blitzed Colton Herrera, ending their heavyweight affair in a hail of punches at 39 seconds of the opening round; Antonio Martinez stopped Isaac Flores via strikes at 2:14 of Round 3 of their featherweight bout; Keron Reed took a unanimous decision over Jonathan Walker; Tony Toro made a successful amateur debut, defeating Blue Vasquez by unanimous decision; and Dean Freire beat Jorge Cruz by unanimous decision.