Mark Munoz had nothing for Gegard Mousasi.

A former Strikeforce and Dream champion, Mousasi submitted “The Filipino Wrecking Machine” with a first-round rear-naked choke in the UFC Fight Night “Munoz vs. Mousasi” headliner on Saturday at the O2 World in Berlin. Munoz (13-5, 8-5 UFC) surrendered 3:57 into round one, as he tapped out for the first time in his professional career.

Mousasi (35-4-2, 2-1 UFC) countered the Reign MMA representative at every turn, often battering him with punishing elbows from his sprawl. The 28-year-old Iranian-born Dutchman moved to mount after a failed takedown attempt from Munoz, forced the Californian to surrender his back and caught him in the choke. Flattened out, Munoz had no alternative but to submit.

It was the 27th first-round finish of Mousasi’s career.

“The Doberman” set the tone in the first round, where he floored an off-balance Carmont (22-9, 6-2 UFC) with a left hook and swarmed with punches. The Tristar Gym representative weathered the assault but never seemed to establish a rhythm. Dollaway controlled the final 10 minutes with his takedowns and topside grappling, moving to the Frenchman’s back before transitioning briefly to full mount in the third round.


Former King of the Cage champion Sean Strickland kept his perfect professional record intact with a controversial split decision over “The Ultimate Fighter” Season 17 alum Luke Barnatt in a middleweight showcase. Two of the three cageside judges sided with Strickland (15-0, 2-0 UFC) by 30-27 and 29-28 scores; a third cast a dissenting nod in Barnatt’s favor.

Strickland had issues navigating the height, length and reach of the lanky Brit, as Barnett (8-1, 3-1 UFC) sat behind a stiff jab for much of the 15-minute encounter. The 23-year-old Californian struck for a trip takedown in the second round and applied some ground-and-pound, but he spent a lot of his time in an almost constant backpedal trying to avoid Barnatt’s punches while countering tactically.


Cage Warriors Fighting Championship veteran Niklas Backstrom submitted Tom Niinimaki with a first-round rear-naked choke in a featured featherweight clash. Niinimaki (21-6-1, 1-1 UFC) conceded defeat 4:15 into round one, his career-best 12-fight winning streak a thing of the past.

A replacement for the injured Thiago Tavares, Backstrom (8-0, 1-0 UFC) succumbed to multiple takedowns from the Finnish export but remained patient and waited for an opening. A stepping knee from the Swede staggered Niinimaki, who then attacked his opponent’s legs out of desperation. Backstrom countered and switched from a bulldog choke to a rear-naked choke, securing the tapout with less than a minute left in round one. 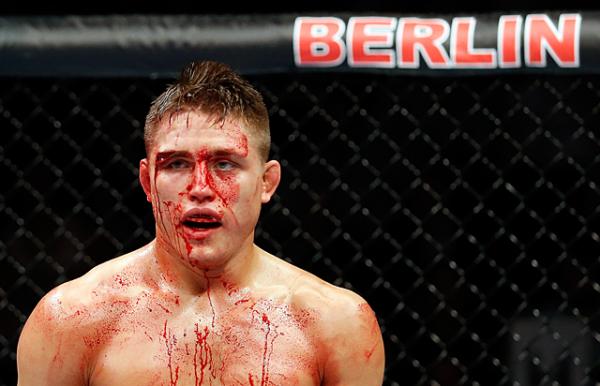 Photo: Boris Streubel/Zuffa LLC/Getty Images
Dober (Pictured) and Hein went to war.
German judoka Nick Hein made a triumphant UFC debut, as he earned a unanimous decision over Bellator MMA alum Drew Dober in an undercard duel at 155 pounds. All three judges scored it for Hein (11-1, 1-0 UFC): 29-28, 30-27 and 29-28.

Hein mixed in trip takedowns and lit up the American with powerful left hooks throughout their 15-minute engagement. One of the blows opened a cut over Dober’s right eye in the first round. He was not dissuaded. The game Dober (14-6, 0-2 UFC) moved into top position late in round two, piling up points with elbow-laden ground-and-pound.

Momentum shifted back to Hein in the third, where he ripped into his foe with more left hands, causing further damage to Dober’s right eye. Blood flowed freely, covering both fighters and parts of the canvas.


Swedish export Magnus Cedenblad submitted Krzysztof Jotko with a second-round guillotine choke in a preliminary middleweight pairing. Jotko (14-1, 1-1 UFC) conceded defeat 4:59 into round two, as he was beaten for the first time as a professional.

Cedenblad (12-4, 2-1) utilized takedowns and top control to bottle up his Polish adversary during the early stages of their match. After a series of scrambles and reversals late in the second round, Jotko left his neck exposed. Cedenblad capitalized, locking down an arm-free guillotine for the finish. The 32-year-old Swede has won nine of his last 10 bouts.


Onetime Jungle Fight champion Iuri Alcantara needed less than half a minute to wipe out Vaughan Lee in an undercard tilt at 135 pounds. Alcantara (30-5, 5-2) put away the Englishman 25 seconds into round one, winning for the third time in four appearances.

An overhand left dropped Lee (14-10-1, 3-4 UFC) in the center of the cage, leaving him dazed and defenseless before the two bantamweights had broken a sweat. Alcantara followed with a short burst of punches that brought it to a decisive close. Lee had not been knocked out in nearly seven years.


German grappler Peter Sobotta showcased all his skills in cruising to a unanimous decision against the previously undefeated Pawel Pawlak in a preliminary welterweight affair. All three cageside judges scored it 30-27 for Sobotta (14-4-1, 1-3 UFC), who has won six fights in a row.

Pawlak (10-1, 0-1 UFC) was never a factor. Sobotta chewed up the Pole with a series of body kicks, jabs and straight lefts in the first round. The 25-year-old turned to his takedowns in rounds two and three, controlling Pawlak with a suffocating top game and moderate ground-and-pound.

The Venezuelan leveled Ogle (9-5, 1-4 UFC) with a running switch kick inside the first 10 seconds and swarmed him with punches on the ground. The blows left Ogle bleeding from a split lip. The Englishman turned the tide in his favor in the second round, where he struck for a takedown, transitioned to Blanco’s back and harassed him with chokes. However, the momentum did not last.

Blanco re-established his superiority in round three, where he popped Ogle with jabs, straight punching combinations and leg kicks. He punctuated his first victory in more than a year with a beautiful spinning kick to the head in the final minute.


Dagestani kickboxer Ruslan Magomedov landed with combinations and countered effectively throughout, as he captured a unanimous decision from the previously unbeaten Viktor Pesta in a preliminary heavyweight scrap. All three cageside judges struck the same verdict: 29-28 for Magomedov (12-1, 1-0 UFC), who has rattled off seven consecutive victories.

Pesta (9-1, 0-1 UFC) had his chance. The 23-year-old Czech survived an encounter with a right hook and head kick in the first round, later flooring Magomedov with a knee strike from the clinch. From there, Pesta settled in guard and went to work with his ground-and-pound. Elbows and punches found their mark, but a finish never materialized. It proved to be a wasted opportunity.

Magomedov slowly seized control of the match over the final 10 minutes, as he shut down Pesta’s takedown game, trapped him on the feet and zeroed in with punches and kicks.