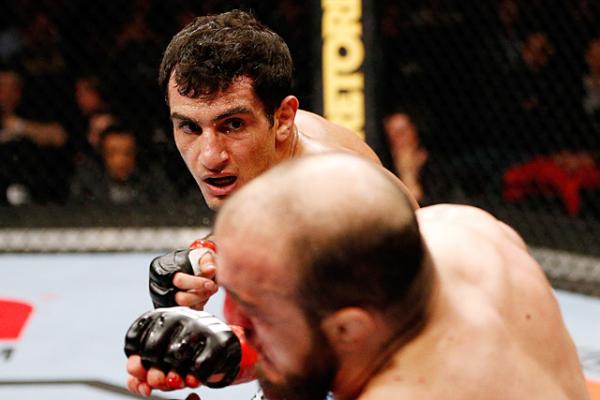 A stout, accurate jab carried the former Dream and Strikeforce champion to a lopsided unanimous decision over Ilir Latifi in the UFC on Fuel TV 9 headliner on Saturday at the Ericsson Globe Arena in Stockholm. All three judges arrived at the same verdict: 30-27 for Mousasi (34-3-2, 1-0 UFC), who has rattled off four wins in a row.

Latifi, a short-notice replacement for the injured Alexander Gustafsson, was no match for the speed and skill of “The Dreamcatcher.” One jab after another found its mark on the Swede’s face, and the damage the blows exacted became readily apparent. Kept at range, the brawny 29-year-old failed to get Mousasi on the ground until the closing seconds of the fight, and by then, it was far too late to make a difference.

“I had the advantage striking-wise,” he said. “I know he’s a wrestler, so I didn’t want him to close the distance. I fought smart. Some people lay and pray. Maybe I did a little bit of that with the standup.”


In the lightweight co-main event, “The Ultimate Fighter” Season 9 winner Ross Pearson stopped Ryan Couture on second-round punches for his eighth win in 11 bouts. Couture (6-2, 0-1 UFC) met his end 3:45 into round two, his four-fight winning streak a thing of the past.

Couture kept Pearson (15-6, 7-3 UFC) guessing throughout the first five minutes, as he sucked the Alliance MMA representative into the clinch and racked up points with knees, elbows and shoulder strikes. He was not as successful in round two. There, Pearson unlocked his timing, tripped him to the canvas and teed off once Couture attempted to stand. A series of power punches had Couture reeling, and Pearson sealed it with one last searing left hook and follow-up ground strikes.

“It was just patience, timing and not overcommitting,” Pearson said. “I’ve had a lot of fights now. Practice makes perfect.” 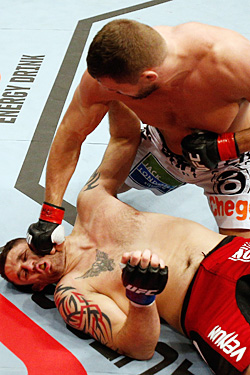 Mitrione (6-2, 6-2 UFC) closed the deal 19 seconds into round one, as he threw the brakes on a two-fight losing streak.

Hands down and head exposed, De Fries (9-3, 2-3 UFC) moved in for a takedown, only to be met with a short counter right hand. He collapsed to the canvas in a dazed state, and Mitrione rendered him unconscious with a series of unanswered lefts and rights.

“I’m developing,” Mitrione said. “I was out for a long time, so I appreciate the UFC giving me this fight. Whoever they think is appropriate for me to get down [with], let’s get down.”


The world-ranked Brad Pickett recorded his 13th win in 16 fights, as he took a split decision from Alliance MMA’s Mike Easton in a superb scrap between two of the UFC’s premier bantamweights. Two of the three cageside judges scored it 30-27 for Pickett (23-7, 3-2 UFC); a third cast a dissenting 29-28 nod for Easton (13-3, 3-2 UFC).

The give-and-take action spilled all over the cage. Pickett appeared to be the busier and more diverse of the two on the feet, as he fired away with punching combinations, knees and even short elbows from the clinch. Easton did his best work in the second round, where he utilized his strength advantage to toss around Pickett in tie-ups, delivered a takedown and scored effectively with punches.

American Top Team’s Pickett re-established himself in round three, as he scrambled out of an Easton takedown and settled in top position. Both men threw caution to the wind late, exchanging punches with reckless abandon in the closing seconds.


A calm and calculated Diego Brandao submitted Pablo Garza with a first-round arm-triangle choke in a featured matchup at 145 pounds. Garza (12-4, 3-3 UFC) conceded defeat 3:27 into round one, as he lost for the third time in four outings.

Brandao (17-8, 3-1 UFC) scored with a takedown roughly two minutes into the fight, carved through the 6-foot-1 Garza’s guard and set up shop in side control. From there, “The Ultimate Fighter” Season 14 winner transitioned beautifully to the arm-triangle choke. Garza put up a brief struggle but ultimately succumbed to the submission.

“Because he’s so tall,” Brandao said, “I didn’t want to strike with him too much.”


“The Ultimate Fighter” Season 14 semifinalist Akira Corassani made a triumphant return to his native Sweden, as he captured a unanimous decision from heavy-handed Californian Robbie Peralta in a featherweight showcase. All three cageside judges scored it for Corassani (11-3, 2-0 UFC): 30-27, 30-27 and 29-28.

Outside of a crisp left hook that nearly finished the Swede in the second round, Peralta (16-4, 2-1 UFC) was largely a non-factor in the fight. Corassani baffled him with constant movement, effective counterpunching and kicks to the legs. In the third round, the 30-year-old delivered multiple takedowns and scored inside the clinch, handing Peralta his first defeat in nearly four years.