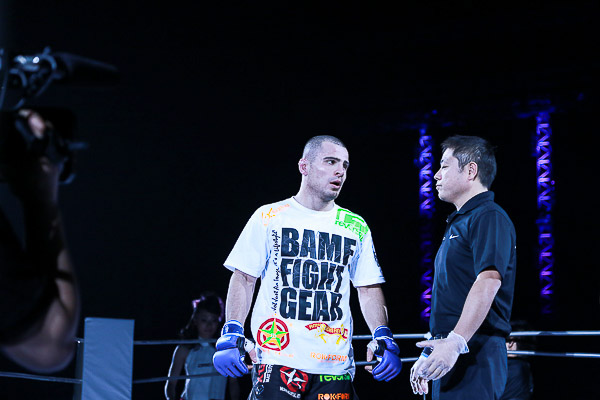 Like many of his lighter-weight brethren, Karakhanyan has taken offense to McGregor’s brash ways and doesn’t think the 25-year-old Dublin native’s hype matches his resume.

“As far as that Irish kid, he sucks. He hasn’t fought anybody ... and he’s calling out all these guys,” Karakhanyan said during an appearance on the Sherdog Radio Network’s “Beatdown” show. “I feel like he’s disrespecting a lot of fighters. Honestly, if I see him on the street, I’ll bitchslap him. That’s the reality. Hopefully if I get the opportunity to fight him, I’ll bitchslap him in the fight too.”

Karakhanyan, who has 27 professional bouts to his credit, believes that McGregor has bypassed much of the process many fighters have to go through to reach the pinnacle of the sport. A former Cage Warriors Fighting Championship 145-pound titlist, McGregor is set to headline the UFC’s return to Ireland against Diego Brandao even though he has just two Octagon appearances under his belt.

Before being paired with Brandao, a replacement for the injured Cole Miller, McGregor attempted to pick fights with a number of the sport’s most prominent names.

“I call it the jackpot. I think some MMA fighters hit that jackpot, and they make it to the top so fast and make all their money. Some of us, we’ve got to go through hard fights, fight all the tough fighters and we still don’t get credit,” Karakhanyan said. “Calling out my good friend Cub Swanson -- what’d he call him, Grandpa? -- he doesn’t know who he’s messing with. If someone’s a top 10 guy in the UFC, he would just literally run through [McGregor].

“I know he’s trying to promote himself and get his name out there, but when that door locks he’s going to be in big trouble.”

Of course, Karakhanyan has his own business to handle at WSOF 10 on June 21, when he makes his first title defense against Rick Glenn at the Hard Rock Hotel and Casino in Las Vegas. Although he is unbeaten in his last 12 outings -- including two straight in WSOF -- the Roufusport-trained Glenn is far from a household name. According to Karkhanyan, that just makes him more of a threat.

“It’s dangerous fighting somebody not [well-known]. You can’t look through guys like that because they’re trying to build off your name,” he said. “I was in his shoes before so I know what it feels like going into the fight. I don’t underestimate him -- I know he trains with Anthony Pettis and all those guys. I just hope he comes as prepared as I’m going to come to the fight.”