Much of the media coverage in Germany prior to UFC 99 on Saturday was reminiscent of Sen. John McCain’s attack on mixed martial arts in the 1990s.

Spurred by local politicians in the midst of their election campaigns and polemic members of Deutschland’s still powerful and influential boxing lobby, the age-old prejudices of “human cockfighting” and “unrestrained brawls” returned to the surface.

But what was the postfight coverage like? Sherdog.com followed Germany’s most important newspapers, magazines and television segments for the following overview of the state of German MMA following Zuffa’s first expedition into central Europe.

Editors were texting headlines like “Blood and Circuses” (Berliner Morgenpost), “Cologne Cage Fight Pleases International Mob” (Die Welt) and “Bloodstain on the Canvas” (SÃ¼ddeutsche Zeitung), and while the majority of coverage surrounding UFC 99 was rather negative, there were a couple of surprisingly well-researched articles written within the past 48 hours.

They listed and focused on the various injuries the fighters allegedly sustained at UFC 99, including facial fractures, cuts and bruised ears. The WDR narrator criticized the supposed lone intention of fighters to beat opponents to a bloody pulp or choke them unconscious and concluded that “the only purpose of this violent show is to generate revenue.”

RTL went even further and stated that the applause from the audience at the arena was the loudest when the fighting was most brutal and that MMA has just enough rules to pass as a sport and still look like a street fight. It also speculated that mixed martial arts might be banned in Germany next year.

The KÃ¶lnische Rundschau, meanwhile, focused on Stefan Struve’s bloody war with Denis Stojnic, as did probably 95 percent of all media outlets. It also quoted Carolin Krause, the head of Cologne’s youth welfare center, who said, “Those things [that happen inside the cage] can quickly be imitated by unstable teen-agers, with fatal consequences.”

The “Express,” one of the main tabloids in North Rhine Westfalia, had quotes from Cologne mayoral candidates JÃ¼rgen Roters and Peter Kurth, who demanded “no more cage fighting in Cologne ever again.” 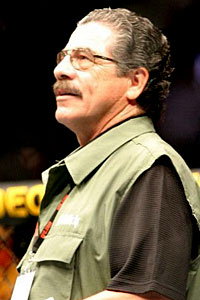 Photo by Sherdog.com
Jacob “Stich” Duran was
featured in Berliner Zeitung.
Lieberberg: UFC Could Return in 2010

More moderate was the coverage from other outlets like the Frankfurter Allgemeine Zeitung, the best-read German newspaper outside of Deutschland. The publication titled a story “We are No Savages” in reference to a quote made by UFC President Dana White. The article focused on the work of ringside doctor Peter Nelles, noted the big ovation Mirko “Cro Cop” Filipovic received and stated UFC parent company Zuffa LLC was “sitting out” the disapproval it faces in Germany.

Die Welt, one of the large daily national newspapers, compared the event to a meeting of Roman gladiators at the coliseum. It also emphasized the internationality of the fan base and criticized Cro Cop’s eye poke against Mustapha al Turk. Finally, it quoted co-promoter Marek Lieberberg: “I’m positive that the UFC will return to Germany in April of 2010, as the [KÃ¶nig-Pilsener] Arena in Oberhausen has expressed their interest in hosting a show.”

Weekly magazine Stern, which has a circulation of close to one million, called the UFC “a big show for men with too much testosterone.” It also noted that fighters are not brainless thugs who beat up each other but mostly well-educated men. It described fans as “people looking for the blood of the fighters, the tits of the ring girls and a new beer for themselves.”

There were at least three positive articles, which stood out of the media fallout like a green hat with an orange bill.

The first came courtesy of the Berliner Zeitung, the most subscribed newspaper in Berlin and Brandenburg. Author Susanne Rohlfing caught up with famed cutman Jacob “Stich” Duran, who addressed the bloody side of the sport. “Injuries sustained in a fight are looking worse than they actually are most of the time,” Duran told her. Rohlfing also touted the event for what she viewed as perfect production and called it a “colorful mega show made in Las Vegas.”

Meanwhile, the Tageszeitung, one of the most important mouthpieces of the left wing political spectrum, published a well-researched article that focused mainly on the fans who attended the show. Author Bernd Pickert asserted that the majority of the audience did not consist of curious people looking for a new thrill. Most, he wrote, were MMA experts from all over Europe. He called the sport “a demonstration of toughness and tactics” and praised the even matchups as a far cry from what people are used to in professional boxing in Germany.

Finally, arguably the most positive article coming out of UFC 99 hit the Sunday edition of Bild -- Europe’s biggest tabloid, with a reach of more than 11 million readers. Albert Link hyped German prospect Peter Sobotta as a genuine star in the making despite his decision loss to Paul Taylor. He described the 22-year-old as a fearless young super athlete with a strict training regimen and concluded that, even though he lost the bout, he held his own.