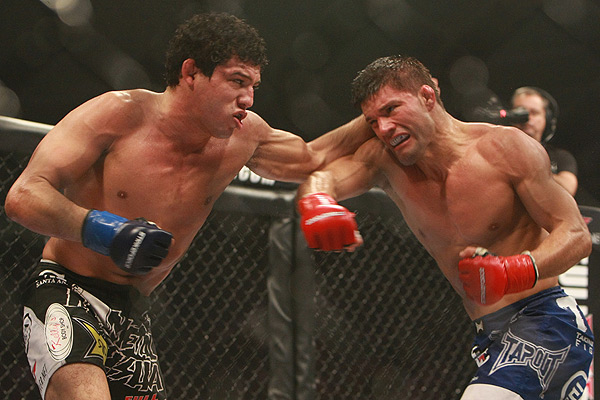 The dance card for the next Strikeforce event is beginning to take shape.

In addition to the expected heavyweight grand prix final between Josh Barnett and Daniel Cormier, promotion officials Monday announced three other bouts for the May 19 card, including a lightweight title tilt pitting champion Gilbert Melendez against Josh Thomson.

Strikeforce “Barnett vs. Cormier” takes place at the HP Pavilion in San Jose, Calif., with the main card airing on Showtime beginning at 10 p.m. ET; the preliminary card will be shown beginning at 8 p.m. ET on Showtime Extreme.

It was rumored that Melendez would face an imported UFC opponent for his next title defense, but instead the Skrap Pack representative will square off for a third time with Thompson. The two first met in 2008, with “The Punk” retaining his Strikeforce 155-pound strap via five-round decision. They would rematch more than a year later, with the interim champion Melendez unifying the titles in a decision triumph of his own.

“El Nino” was victorious in his last outing, decisioning Jorge Masvidal in December. The 29-year-old is regarded as one of the best pound-for-pound fighters in the world and has won six straight fights since falling to Thomson.

Thomson returned to the cage in March at Strikeforce “Tate vs. Rousey,” his first appearance since since losing to Tatsuya Kawajiri on New Year’s Eve 2010. The American Kickboxing Academy product took a workmanlike victory over K.J. Noons in a performance he would later describe as “s---.”

Cavalcante earned a second-round knockout of Yoel Romero Palaico this past September after relinquishing his 205-pound crown to Dan Henderson more than a year ago. Feijao has finished 10 of his 11 victims by knockout or technical knockout.

Expected to face Gegard Mousasi on the March 3 Strikeforce bill, Kyle was forced to withdraw from the bout due to injury. A former King of the Cage light heavyweight champion, Kyle has compiled a 3-3-1 mark fighting for Strikeforce since 2006.

Voelker, a five-time veteran of the Challengers series, returns to action for the first time since winning two straight contests against Roger Bowling. A product of Finney’s MMA, Voelker has finished 15 of his 24 career victories by knockout or technical knockout.

Beaten just once in nine in-cage appearances, Burrell last appeared at Strikeforce “Rockhold vs. Jardine” in January, where he earned a split-decision triumph against James Terry. The 22-year-old Fight Firm representative also owns victories against Joe Ray and Lukasz Les while under the Strikeforce banner.