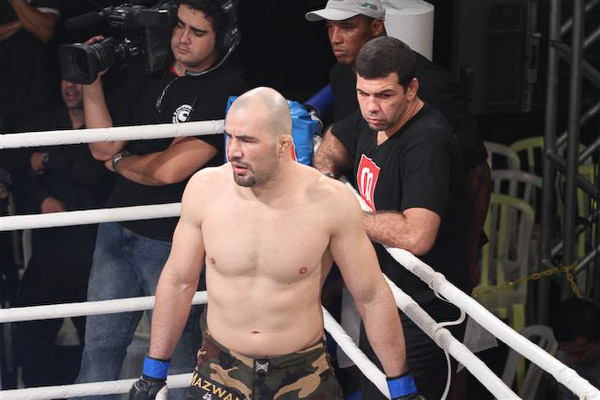 For years, Glover Teixeira toiled on the Brazilian and American fight circuits, racking up win after win while visa issues blocked his path to the Octagon. Now, just one fight into his UFC career, the 32-year-old light heavyweight finisher will have the chance to propel his career into the next echelon when he takes on former champ Quinton Jackson at UFC 153 in October.

Teixeira spoke with Sherdog.com this week about his training camp, fighting “Rampage” and what he believes happened to a rumored matchup with countryman Mauricio “Shogun” Rua.

Sherdog.com: How did you take the news that would face Rampage?
Teixeira: I knew more or less what would happen. They had offered me this fight and I accepted right away, as I accepted Shogun. It wasn’t confirmed, but I saw it on Twitter and some sites. I haven’t talked to my manager about this confirmation, but if it came from the UFC, it must be right.

Sherdog.com: And how do you view this matchup against Rampage?
Teixeira: I’m going out with him in the standup. I have to be smart and not stand still, move, fight the right fight. But, I’ll work on the strategy with my coaches.

Sherdog.com: Do you think you should consider taking the fight to the ground, since Rampage is admittedly weak in this area?
Teixeira: Look, it’s MMA. I’m prepared for everything. The ground will be part of the game, yes, but I have to train everything for him, even takedown defense.

Sherdog.com: And that increased confidence in the striking comes after training in Holland?
Teixeira: Of course. The training there was more for Pedro [Rizzo], who was fighting Fedor. But I also did some training with guys like Peter Aerts and some very good kids there, where muay Thai is really strong.

Sherdog.com: First Shogun, now Rampage -- the UFC has shown that they liked your fight, haven’t they?
Teixeira: It’s true, they wanted to put a tough guy, a good name against me, and that’s cool. It shows that they liked my fight and trust me to put on a good show.

Sherdog.com: Where will your camp be for the Rampage fight?
Teixeira: I’m living here in the U.S., in Danbury, Conn. I’m also in Las Vegas, and now I’m going to help Lyoto Machida in his camp to fight against Ryan Bader. My camp will be here. I just got a green card and I have to stay here in the country for six months. I was in Brazil for a long time; now, I have to stay here and comply with this rule.

Sherdog.com: Will Pedro Rizzo participate in the camp?
Teixeira: I want Pedro here, yes, of course. We have yet to talk about it. He has to take care of the kids at Manguinhos Training Center.

Sherdog.com: After living in Rio for so long, you’re coming back to fight in a UFC event there. How happy are you with that?
Teixeira: Wow, it’s the best thing! I went to both UFCs in Rio and was very happy with what I saw, the crowd. Now, I imagine the crowd thrilled that way again, but this time for my fight. But I can’t get too excited. You know how a fight is. You have to train and get ready.