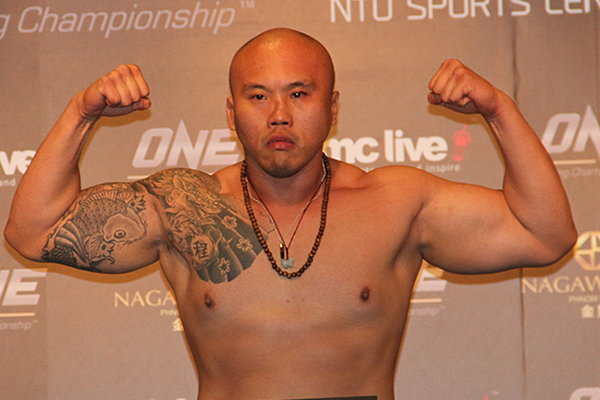 Paul “Typhoon” Cheng has won three fights in a row, all of them finishes. | Photo: James Goyder


From wrestler, football player and stuntman to boxer and professional mixed martial artist, Paul Cheng has challenged stereotypes in pursuit of one dream after another.

Cheng now has his sights set on becoming the first Asian heavyweight champion for One Fighting Championship. The 35-year-old will face Egyptian Top Team product Mahmoud Hassan at One FC 18 “War of Dragons” on Friday at the TNU Sports Arena in Taipei, Taiwan.

While Cheng immigrated to Canada from Taiwan when he was 9, he remains fiercely proud of his Taiwanese heritage. Even the nickname he chose for himself, “Typhoon,” represents part of his homeland.

“Typhoon season in Taiwan happens every year, and it’s destructive if you’re not ready,” Cheng said. “Typhoon comes hard and fast, very similar to my fight style, aggressive and coming for the finish. I am Taiwanese with a Canadian passport; I want to make that clear. I immigrated as a child, but I have very fond memories of my roots in Taiwan. My sister lives there [and] so do many members of my family. My family and my country are behind me, supporting me, and I can’t wait for July 11. One of my dreams as a kid was to represent Taiwan in a sport; now it’s about to happen, and I thank One FC for making it happen.

“MMA has changed my life,” he added. “It gave me new goals and dreams. Now my goal is to be One FC world champion. I want to prove that I belong as one of the best big men in the world. MMA has given me so much already. I can’t wait to see where else it can take me.”

Although he made his debut in MMA later than most -- he was 32 -- in the sport, Cheng is no stranger to the discipline and dedication required of athletes. Cheng wrestled and played football in high school and college before being drafted by the BC Lions with the sixth overall pick in the 2002 Canadian Football League Draft. He was cut a few years later and forced to look for direction. Cheng’s search led him to Hollywood, where he landed several gigs as a stuntman, scoring appearances in both “Night at the Museum” films. That career first pointed him to the martial arts.

“A few of the Asian stunt guys at the time told me that I needed to learn martial arts, so I can look realistic when fighting in the movies, especially kicking,” Cheng said. “My best friend at the time and current coach, Sal Ram, was an MMA fighter, and he had insisted that I train with him. I started out with boxing and eventually learned all the rest, and to this day, Sal remains my coach and mentor.”

While the rigors of regular training were not new to Cheng, he discovered that the fundamentals of martial arts were far more demanding.

“The transition was quite difficult because, other than some wrestling I did in high school and university, I had no idea what to do,” he said. “So I started learning boxing in 2007, in which I competed professionally for a brief time, then BJJ and now I train all aspects, such as muay Thai and even judo recently. MMA training is more difficult for me because of the longer cardio aspect and training twice a day.

“Since the transition, I have lost about 40 pounds, which has helped my endurance, speed and athletic ability,” Cheng added. “Football training is harder on the body due to the hits on the body, but in MMA training, the conditioning involved is like no other sport in this world.”

While Cheng primarily trains under Ram at Clinch MMA, he has also trained with the Tristar Gym in Montreal, home to former Ultimate Fighting Championship welterweight titleholder Georges St. Pierre. It was there that he met his current manager, Pride Fighting Championships and UFC veteran Denis Kang, who recently opened his own gym in Seoul, South Korea.

“I met Denis Kang at the time I was training BJJ with one of Denis’ black belts in Vancouver,” Cheng said. “At Tristar, I got to work with Francis Carmont; it was a great experience learning under Firas Zahabi and [strength and conditioning] coach Jonathan Chamberg. It really opened my eyes in MMA.”

With eyes wide open, Cheng will look to take the next step toward accomplishing his dream against Hassan. A former national boxing champion, the 33-year-old Hasan was the first Egyptian to sign with Sinagapore-based One FC.

“Hassan [has] got heavy hands, and again, it’s a heavyweight fight,” Cheng said. “Either of us can go down any time, but I feel I’m a better overall MMA fighter. I plan to impose my complete MMA game on him.”

If Cheng can subdue Hassan, he hopes One Fighting Championship CEO Victor Cui, a fellow Canadian, will consider him for a potential title match. He already has an idea of whom he should face.

“James McSweeney is the guy to go through for the belt at the moment,” Cheng said. “He beat [Chris] Lokteff, so he’s the man for now.”