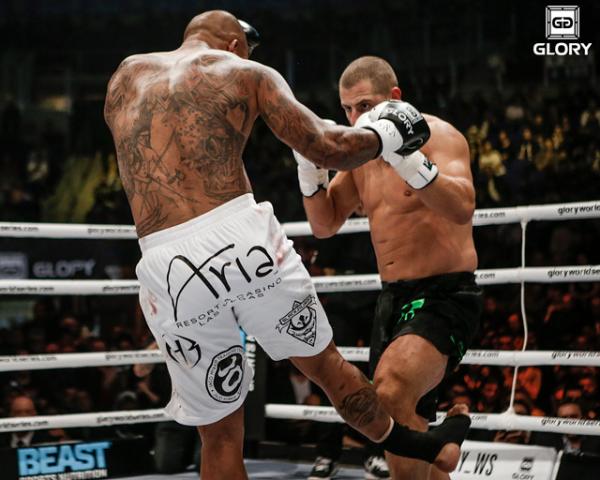 Saki squared off against Tyrone Spong in the tourney final at Istanbul’s Ulker Arena, a rematch of their 2009 K-1 World Grand Prix heavyweight bout which Saki won via knockout in an extension round.

This time out, the top-ranked strikers barely had a chance to get started before Spong sustained a nasty, fight-ending injury. Ninety seconds into the opening round, Spong’s right leg bent at an unnatural angle below the knee as he had a low kick checked by Saki. The Surinamese fighter hit the ground in agony, and Saki knelt beside his downed opponent as referee Al Wichgers called an end to the bout after only 97 seconds.

In addition to his new belt, Saki banked $200,000 for the tournament win, though it was clear after the bout that the Turkish-born champion’s thought were with his opponent. 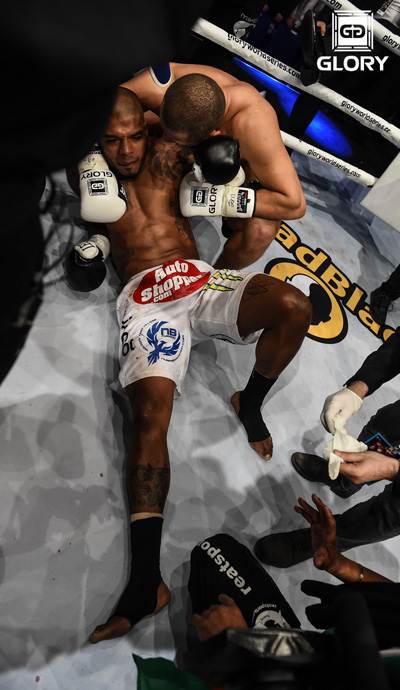 Photo: Glory Sports International
Spong seriously injured his right leg.
“What happened with Tyrone, I feel really sorry for him,” Saki said in a subdued post-fight interview as Spong was stretchered from the ring. “I feel bad about it. Tyrone is a good guy, a real professional, and I wish him good luck with his recovery.”

Earlier in the night, Saki used his heavy left hand to punish Australian Nathan Corbett’s body in their semifinal, but it was a left hook behind the ear that sealed the deal. Blood began to leak from Corbett’s right ear after the punch, leading the ringside physician to advise referee Wichgers to halt the fight at the 2:35 mark.

Tournament underdog Saulo Cavalari did not make things easy for Spong, who needed all three rounds to advance to the final. Cavalari looked to overwhelm Spong from the opening bell, blitzing the “King of the Ring” with speedy combinations in the pocket and low kicks from the outside. Spong withstood the Brazilian’s assault and walked forward constantly in the last two frames, pumping his jab and scoring with crushing right crosses. In the end, the judges favored Spong’s power-punching over Cavalari’s high-volume attack, awarding the Blackzilian
scores of 30-27, 29-28 and 29-28.

In the tournament reserve bout, former It’s Showtime champion Danyo Ilunga made a strong case for a title shot by knocking out “Mr. KO,” Andrei Stoica. A crushing overhand right from “Dibuba” sent Stoica to the ground late in the opening round. The bloodied Romanian made it to his feet during the 10-count, only to turn his back and retreat to his corner, prompting a stoppage from referee Stefano Valenti at 2:33.

At lightweight, Robin van Roosmalen earned a hard-fought split decision over Marat Grigorian with scores of 30-27, 29-28 and 28-29.

In other action, heavyweight veteran Hesdy Gerges stopped Jhonata Diniz with a second-round technical knockout; light heavyweight Mourad Bouzidi won a lopsided unanimous decision against Randy Blake with 30-25 scores across the board; middleweight Filip Verlinden topped Israel Adesanya with three scorecards of 30-27; Jonatan Oliveira earned a unanimous nod (30-27, 30-27, 29-28) in his welterweight tilt with Atakan Arslan; Niclas Larsen stopped Steve Moxon via TKO at 1:33 of round two in their lightweight bout; and Yodkhunpon Sitmonchai took a majority decision (29-27, 29-27, 28-28) against Raz Sarkisjan at featherweight.