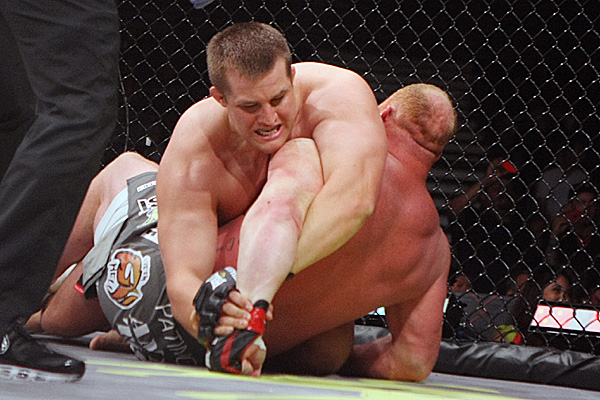 So much for the puncher’s chance.

Bellator Fighting Championships heavyweight titleholder Cole Konrad submitted Eric Prindle with a first-round kimura from half guard at Bellator 70 on Friday at the New Orleans Convention Center in New Orleans. Beaten for the first time in nearly four years, Prindle (7-2, 3-1 Bellator) tapped out 60 seconds into round one. K. Mills
Konrad kept it short via kimura.
“Just practice alone, you develop so much,” said the unbeaten Konrad, a four-time NCAA All-American wrestler and two-time national champion at the University of Minnesota. “I feel real comfortable out here fighting. I keep getting better everywhere. I think I have a pretty solid base with my wrestling, but I’ve got to keep improving on my standup, on my submissions and on my wrestling, too.”

Prindle had no answer for the champion’s size, strength and technique. He swung for the fences inside the first half minute but found only air. It was an ominous development. Konrad (9-0, 7-0 Bellator) ducked inside his punches, lured the hulking Arizonan into the clinch and struck for a takedown with an outside trip. From there, he settled into half guard, isolated Prindle’s left arm and locked in the fight-ending kimura.


A stiff left jab, a bundle of stout right hands and some sneaky trips carried Rick Hawn to a unanimous decision over Brent Weedman in the Bellator Season 6 lightweight tournament final. All three cageside judges scored it for Hawn (14-1, 6-1 Bellator): 29-28, 30-27 and 30-27.

Hawn attacked with his staples, the thudding right hand chief among them. He worked his angles, countered effectively and largely outworked Weedman (20-8-1, 6-3 Bellator) in the standup. The 35-year-old Olympian mixed in a third-round takedown for good measure, racking up points from top position with short punches, forearms and elbows.

“His head is made of concrete,” Hawn said. “I was cracking him good. I knew it was going to be a tough fight.” Nogueira turned the tide in the second round, where he battered Nakamura (15-6-4, 1-1 Bellator) with his hands and left the Japanese veteran with cuts over both eyes. Unable to put the fight on the floor on his terms, the judo black belt looked lost against a far more polished striker. Nogueira struck his opponent with a beautiful straight right hand a little less than two minutes into the third frame, followed him to the mat and brought the match to a conclusion with a series of violent ground strikes.

“I knew he was feeling my punches,” Nogueira said through his translator. “I was waiting for the right moment to finish the fight.”

The win sends Nogueira into the final of the eight-man bantamweight draw, where he will lock horns with fellow Brazilian Marcos Galvao.

“Galvao is a warrior, just like I am,” he said. “It’s going to be good for Bellator.” Clementi (43-21-1, 1-1 Bellator) struck for a takedown with roughly 90 seconds left in round one. Campos worked back to his feet but fell into the guillotine while answering with a double-leg of his own. Clementi locked down on the choke and waited for the tapout.

“I took him very, very serious,” Clementi said. “I’ve been fighting for 14 years. If you think you can go all 14 years without the ups and downs, you’re crazy.” K. Mills
Rader slipped and got ripped
for it against Matthews.
A.J. Matthews won for the sixth time in seven appearances, as he wiped out “The Ultimate Fighter” Season 13 alum Charlie Rader with a sensational second-round head kick in their undercard duel at 170 pounds. Rader (16-6, 2-1 Bellator) met his end 3:34 into round two in a scene that becomes an immediate contender for “Knockout of the Year.”

Matthews (6-1, 2-0 Bellator) landed the decisive blow while his opponent was falling after being belted by a low kick. The 30-year-old Rader had never before been knocked out.


Kelvin Tiller won for the fourth time in as many outings, as he submitted “The Ultimate Fighter” Season 7 alum Jeremiah Riggs with a third-round kimura. Referee Myron Gaudet made the call to free Riggs (7-7, 1-2 Bellator) from the hold 3:38 into round three when the 29-year-old Mississippian cried out in pain.

Tiller (4-1, 2-0 Bellator), who failed to make weight for the preliminary middleweight bout, spent quite some time on the kimura before finding his sweet spot for the finish. K. Mills
German upstart Billstein had a
successful Seal hunt in Louisiana.
German prospect Jonas Billstein responded to the first losing streak of his career in resounding fashion, as he submitted Mike Seal with a first-round rear-naked choke in their undercard matchup at 185 pounds. Seal (13-15-1, 0-1 Bellator) succumbed to the choke 2:55 into round one.

Billstein (10-2, 1-1 Bellator) scored with a takedown, moved to side control and ultimately transitioned to Seal’s back. From there, the finish was a formality. The 20-year-old cinched the choke soon after and, with it, his first win on American soil.


Derek Arcement made the most of the opportunity in his promotional debut, as he captured a unanimous decision from fellow Louisianan Blake Dufour in a preliminary bantamweight tilt.

A Gold Dragon MMA representative, Arcement (2-2, 1-0 Bellator) has put together back-to-back wins to even his record.

Dufour (2-2, 0-1 Bellator), who cut his teeth inside the regional Prestige Fights promotion, has come up short twice in his past three outings.