Seven years after their first meeting, Kendall Grove got his revenge on Joe Riggs.

In the headliner of ProElite's MMA return Saturday night at Honolulu's Neil S. Blaisdell Arena, the 28-year-old Maui, Hi., native avenged his May 2004 knockout loss to his fellow UFC veteran, choking out "Diesel" in just 59 seconds with a standing guillotine in his Hawaiian homecoming.

Grove, the winner "The Ultimate Fighter" Season 3, looked to control the cage with his longer reach, walking down Riggs in the opening moments of the fight. After plunking "Diesel" with a stiff right straight to the face, the Arizona native's instincts took over, turning a drop to his knees into a takedown attempt. Using the cage to support himself, the TUF champ snaked his long arms around the dazed Riggs' neck to sink the guillotine. Riggs struggled briefly before tapping to the standing choke just 59 seconds into the first round. 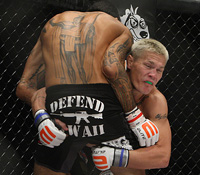 D. Mandel
Grove put Riggs away quickly.
The win came in the same iconic Hawaiian fight venue that Riggs viciously pounded out Grove from the guard at Rumble on the Rock 5 in May 2004.

With the victory, Grove moves his career mark to 13-9, breaking a two-fight losing streak that led to his UFC release in June. Riggs falls to 34-14 with his third straight defeat.

Arlovski, 32, nearly took a completely dominant first period after scoring a trip takedown to punish Lopez with punches from mount. However, Lopez finished the frame with a last second reversal to threaten with chokes. "The Pitbull" repeated with a bodylock takedown for more ground-and-pound in the second, but inexplicably could not put Lopez away.

Apparently posing no threat, it became clear to the Belarusian that he was free to do as he pleased, prompting him to throw in a number of esoteric strikes such as double kidney punches, double axehandles, and an illegal body stomp. With the third round looking to be a repeat of the grueling first and second stanzas, referee Chris West stepped in to pull Arlovski from the mount for the mercy stoppage at 2:43 mark of the final frame.

"I didn't follow our game plan 100 percent, but at least I did something," offered the former UFC champion after the performance. 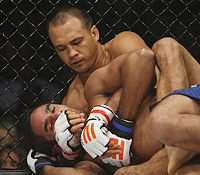 After succumbing to an early Gardiner takedown, the 30-year old Brazilian jiu-jitsu black belt snaked his way to the Tennessee native's back where --in true Penn fashion -- he locked up the choke for a quick tap.

"I did what I tried to do. I didn't expect to get taken down, so I was impressed," said a smiling and excited Penn.

In the evening's sole 135-pound women's bout, Olympic silver medalist Sara McMann dominated Raquel Pa'aluhi on the feet and the canvas, using her Olympic-level freestyle wrestling to put the hapless Hawaiian on her back at will.

Despite Pa'aluhi's valiant efforts to scramble for escapes and reversals, McMann was able to keep her opponent pinned for blistering shots from above. Pa'aluhi's best offense came in the form of a loose triangle choke in the second frame and wild punching exchanges early in the third.

However, the 2004 Athens Games standout's brutal beatdown over the course of the bout sapped the resistance from the Hawaiian when she applied the wrenching keylock to elicit the tap at 2:53 of round three. 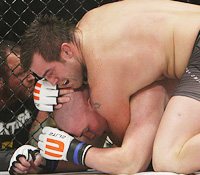 D. Mandel
Ellis tapped out Heun.
While the former Missouri Tiger Ellis, who has taken up training at American Kickboxing Academy in San Jose, Calif., relied on his wrestling to take Heun down and wear him out on the canvas, the former University of Hawaii Warrior middle linebacker threatened with heavy standing strikes, sweeps and sub attempts from bottom, turning a kimura attempt into a sweep halfway through round two.

Ellis' wrestling instincts kicked in then, allowing him to escape in scramble to take Heun's back to sink a hookless rear-naked choke. A weary Heun tapped at the 2:29 mark of the second round.

Entering on little more than 24 hours notice after popular Hawaiian puncher Kala Hose withdrew from the bout due to a knee injury, Cambridge, Minn., fighter Garrett Olson made a valiant effort to storm UFC veteran Drew McFedries in their middleweight bout.

Snapping off jabs, spinning-back fists, and side kicks, Olson antagonized a conservative McFedries with constant offense. It was just a matter of time however until one of the UFC vet's crushing punches got through. After a heavy low kick and one-two counter, McFedries lunged to finish with heavy punches on a fetal Olson before being pulled off by referee Yuji Shimada at 4:04 of the second.

An Eldon "Sale" Sproat flurry put Kaleo Gambill on rollerskates early until an illegal Sproat elbow on the ground saw him given a point deduction by referee West. Gambill quickly recovered to rebound with dizzying flurries of his own, finishing the middleweight bout on the floor with punches at the 1:31 mark of the first. 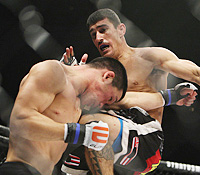 D. Mandel
Barca (right) stopped Remigio.
Kauai product Dustin Barca got the stoppage win over Reno Remigio after both men engaged each other in a lightweight slugfest that unfortunately ended in the interval between rounds two and three thanks to a cut over Remigio's right eye.

Chris Leben-led middlweight Brent Schermerhorn waded through heavy fire to spark Jesse Kaala-Akana Lundgren, finishing with punches on the ground before Yuji Shimada stepped in to call the stop at 1:38 of round one.

Kicking off the event, Joey Palemia went the distance to capture a unanimous decision over Chad Thomas an amateur heavyweight contest.