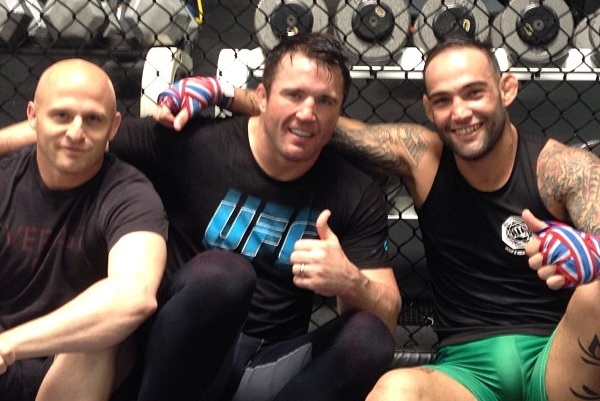 
For up-and-coming mixed martial artists, “The Ultimate Fighter” is an opportunity to win a UFC contract and demonstrate their skills for a larger audience. However, more than that, it’s an opportunity to get in touch with experienced fighters and maybe get help with training outside the house.

That’s what drew Guilherme Vasconcelos, who lost a decision to Ricardo “Demente” Abreu on last week’s episode of “TUF: Brazil 3.” Despite his elimination, “Bomba” developed a friendship with his coach, former UFC middleweight title challenger Chael Sonnen, and now trains with the “American Gangster” in the U.S.

In an interview with Sherdog.com, Vasconcelos spoke about his controversial coach, Sonnen’s upcoming fight with Wanderlei Silva, and the “TUF” experience.

How has your experience been with Sonnen in the U.S.?
The experience has been much better than I expected. We’re training together at Mark Munoz’s Reign Training Center, and from here we go to Oregon, Chael’s birthplace. We’re training a little bit of everything, but I’m focusing on wrestling, which is a part of my training that I needed to improve, just by not having good wrestlers in Brazil. It’s been very fruitful.

How is Sonnen as a coach and a person?
My first contact with Sonnen was as a coach at the “TUF” house. There, he was very attentive and technical. He studied our games and told us exactly what we needed to do to improve while we were there. As a person, he surprised me even more. He showed that, in addition to being technical, he is a great friend and a supporter. He opened the doors of his house to me and welcomed me as if I were an old friend.

When you entered the “TUF” house, did you prefer to be chosen by him?
Regardless of the team that picked me, something that I always had in my head is that I’d be fighting for me, since MMA is an individual sport. Since I grew up watching Wanderlei fight, initially, I would have chosen him. However, I knew that if I was chosen by Sonnen, I’d also be in great hands, knowing the high technical level that he has. Today, I’m sure that being chosen by Sonnen was the best thing that could have happened to me.

Do you think the fact that Sonnen doesn’t speak Portuguese hurt when it came to his unity with the team?
Of course, the language barrier ends up being a hindrance. I can’t believe it affected the unity of the group in any form, but at times, I felt like he wanted to speak more with the fighters, but they didn’t always understand. A few fighters on the team spoke English, but we also had translators all the time. I believe that, in general, what he wanted to teach us was well-received, but individually, personal relationships with each fighter may have been a little prejudiced.

What was the importance of Hortencia Marcari and Vinny Magalhaes for your team
The fact that both are Brazilian and speak our language made us feel a little more at home in the middle of a team of American coaches. Hortencia has always been an icon in the national sport and managed to motivate us with her experiences. As for Vinny, he was a great coach, and because he’s a fighter and former “TUF” participant, he knew exactly what we were going through. Being in contact with him was very important.

Incidentally, does Sonnen know there’s a rumor here in Brazil that he and Hortencia are having an affair?
So, yes, he knows. We had a lot of laughs about it because it’s nothing but a big lie. Sonnen is a married guy, a super family man. His wife was there with him the whole time and even got to know Hortencia, too. It’s amazing how people are evil. It’s nothing but a rumor, like so many others.

What did you think of Wanderlei’s attitude regarding Sonnen?
I think Wanderlei may not have understood that the teasing was clearly for the purpose of promoting the fight. One provokes the other, and in the end, they fight, earn more money and go home. Finished. Simple as that.

How do you think Sonnen will fight against Wanderlei?
I think Sonnen has the right strategy to stop Wanderlei, because he’s strongest in Wanderlei’s worst department, which is wrestling.

On the last episode of “TUF,” your teammates Warlley Alves and Marcos Rogerio “Pezao” de Lima said they will cheer for Wand in the fight. How about you?
Well, since I was chosen by Sonnen, he’s become a great friend of mine. Now, I’m living and training here with him, and I have only compliments for him as a person. I want the whole of Brazil to have the opportunity to meet him as I am meeting him. I think it’s more than clear that I’m 100-percent rooting for him.

What did you think of your fight with “Demente” Abreu? Even losing, do you think you deserve a chance in the UFC?
It was a very tough fight. Like me, Demente also comes from jiu-jitsu. I ended up choosing a stand-up fight, which I think was beneficial for me. But he did take me down and, since he is a noticeably stronger and heavier fighter, I spent a lot of energy getting up, which wore me out. Even worn out, I looked for the knockout until the end. As everyone saw, I walked forward and sought to fight all the time, and I believe this is the style that the UFC and the audience like. So, I deserve to be in the UFC.

With whom did you get along best in the “TUF” house?
Since I’m a quiet guy, I can say that I did well with everyone in the house. Of course, I ended up getting closer to the fighters on my team. We were together all the time. They were great people, but I identified most with “Pezao” and “Peregrino” [Joilton Santos], who have become great friends of mine now.

Which fighters most impressed you in this season?
I really like the styles of Vitor Miranda and “Pezao.” They’re two great fighters with huge potential. It was a pleasure to watch them train and train with them.

If you could give advice to the producers for the next season of “TUF: Brazil,” what would improve the program?
I think the program was great, but they should have allowed us television, phone and Internet. [Laughs.] Jokes aside, I don’t see what could be added to the program to make it better. It was all excellent.