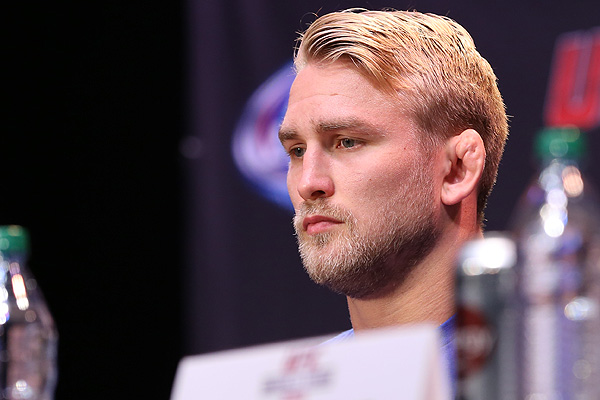 Gustafsson is eager for another crack at the UFC light heavyweight champion. | Dave Mandel/Sherdog.com


Just hours removed from his violent clash with the world’s top pound-for-pound fighter, Alexander Gustafsson is already hoping for a rematch.

The Swedish “Mauler” went toe-to-toe with light heavyweight champion Jon Jones on Saturday night in the main event of UFC 165 but ultimately came up short after five rounds, with Jones retaining his title on scores of 48-47 (twice) and 49-46.

“I’m down whenever. I want a rematch right away if I can,” Gustafsson told Fox Sports following his narrow defeat at Toronto’s Air Canada Centre. “It’s up to the UFC. It’s an honor to fight Jones, and I will be ready whenever they call me.”

Gustafsson battled the highly regarded champion from start to finish in their pay-per-view headliner, stuffing 10 of Jones’ 11 takedown attempts and even putting the champ on his back in round one. Standing, the fight was filled with give-and-take, as Gustafsson used his boxing to lacerate “Bones” above the right eye, while Jones retaliated with effective kicks, punches and elbows.

“It’s hard to say [if I won]. I don’t know, but I learned a lot from this fight,” said Gustafsson. “He’s the champ for a reason. To take the belt from the champ, you need to finish him. I didn’t do it, and I didn’t get the belt, so I’m disappointed.”

Showing his determination, Gustafsson ate multiple hard shots throughout the contest but refused to go down. Jones landed the best blow of the fight in round four, when he connected flush with a spinning elbow to the challenger’s forehead that wobbled Gustafsson badly at the end of the frame. The fifth round proved to be another brutal period, and both men were sent to the hospital after the fight.

Due to the bout’s compelling nature, Gustafsson’s desire for a return bout may fall upon receptive ears within the promotion, as UFC President Dana White appeared open to such a booking at the post-fight press conference.

“Who doesn’t want to see that rematch?” asked White.