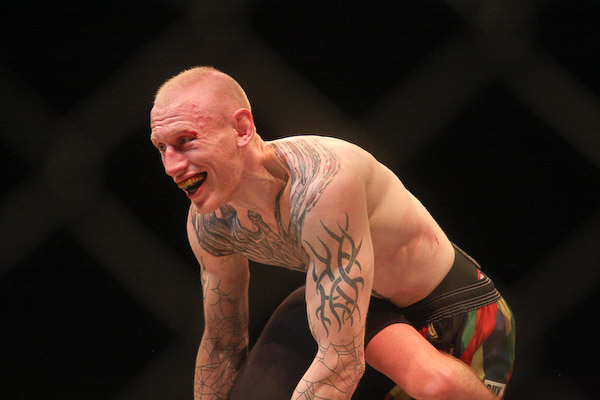 
Gzim Selmani put in a short night’s work in the British Association of Mixed Martial Arts 15 headliner, as he submitted two-time UFC veteran Oli Thompson with a guillotine choke just 18 seconds into their heavyweight tilt at the Copper Box Arena in London on Saturday.

“The Albanian Assassin” rocked Thompson with knee almost immediately before applying the choke. The former strongman fell unconscious before referee Marc Goddard intervened on his behalf. It was Selmani’s (4-1) third consecutive victory inside of a round.

Thompson (12-6), meanwhile, had a two-fight winning streak halted. The ZT Fight Skool representative is now 3-2 since being released following consecutive losses in the UFC in 2012.

In the co-main event, Leon Edwards captured the promotion’s British welterweight strap with a relatively quick submission victory over reigning titlist Wayne Murrie. Edwards secured the tapout via rear-naked choke at the3:13 mark of the opening frame.

Murrie (17-6-1) wasted little time shooting for a takedown, and despite eating a knee in the process, remained persistent in driving his opponent against the fence. However, Edwards (7-1) was able to hang tough and eventually reversed position. The UTC Birmingham representative then took the champion’s back in a scramble before methodically sliding his arm under Murrie’s chin to secure victory.

Colin Fletcher utilized a curious game plan to capture a split decision (29-28, 28-29, 29-28) against Tony Hervey in a lightweight clash. Fletcher improves to 10-4 with his fourth triumph under the BAMMA banner, while Hervey suffers his fourth loss in five outings to fall to 16-16.

Despite having seven submission victories on his resume, Fletcher never made a serious attempt to get the fight to the floor. While the 6-foot-2 “Freakshow” had significant advantages in height and reach against the 5-8 Hervey, it appeared that the Detroit native landed the more significant blows on the feet, wobbling the “TUF: Smashes” alum with a left hand late in round two and opening a cut on his foe’s head with an overhand left in the third.

“I’m my own worst enemy. I normally let guys take me down and try to submit them,” Fletcher said. “I couldn’t bring myself to do it. I just like to fight too much.”

The Englishman was content to fight at range, relying on a variety of kicks and spinning attacks. Although he never was able to hurt Hervey, that approach worked well enough to find favor with two of the three cageside judges.

I thought it could have gone either way. I would have been happy to lose. It was a difficult fight to judge,” Fletcher said. “I wanted to pick my shots.”

In earlier action: Tom Duquesnoy submitted Teddy Violet with a triangle choke 1:29 into the second round; Harry McLeman captured a unanimous decision over Andy De-Vent; Ryan Scope outpointed Ali Arish; Rany Saadeh took a three-round verdict against Mahmood Besharate; Jefferson George won via split-decision over Jack Grant; Alex Montagnani tapped Nathan Jones with a rear-naked choke 2:43 into the opening frame; Andy Craven submitted Richie Edwards with a rear-naked choke at the 2:12 mark of round one; Ed Arthur submitted Nathaniel Wood via rear-naked choke 1:48 into the third stanza and Jacek Toczydlowski forced Benny Carr to submit to punches 1:32 into the card’s opening bout.