As Brandon Halsey predicted, he was simply too big, too strong and too athletic for Kendall Grove. It just took him a little longer than usual to get the job done.

Forced to fight past the opening round for the first time in more than a year, Halsey stopped Grove at the 2:25 mark of round four in the Bellator 137 headliner at the Pechanga Resort and Casino in Temecula, Calif., on Friday night. A relentless barrage of unanswered right hands from mount finally forced referee Mike Beltran to intervene on Grove’s behalf.

The lanky Hawaiian was never able to find his footing in the lopsided middleweight showdown. Halsey (9-0, 7-0 Bellator) threatened to end the contest within the first minute, as he quickly took Grove (21-15, 2-0 Bellator) to the canvas and moved to full mount. From there, “The Bull” framed what appeared to be a tight arm-triangle choke, but Grove escaped only to absorb a series of punches, forearms and elbows from his thickly-muscled foe. Somehow, the UFC veteran survived the assault.

While Halsey’s pace slowed somewhat after that, it never really got much better for Grove. Halsey took his man down consistently over the course of the bout, landing punishing ground-and-pound from top position. When Grove threatened with submissions, Halsey often relied on brute force to escape the attempts. A thudding overhand right from Halsey rocked Grove early in round four, and shortly thereafter, the HB Ultimate member landed one final takedown and went to work for the finish from there.

The victory, while dominant, was bittersweet. Since Halsey came in at 188.1 pounds at Thursday’s weigh-ins, he was stripped of his middleweight title. Only Grove would have been eligible to win the belt with a victory. 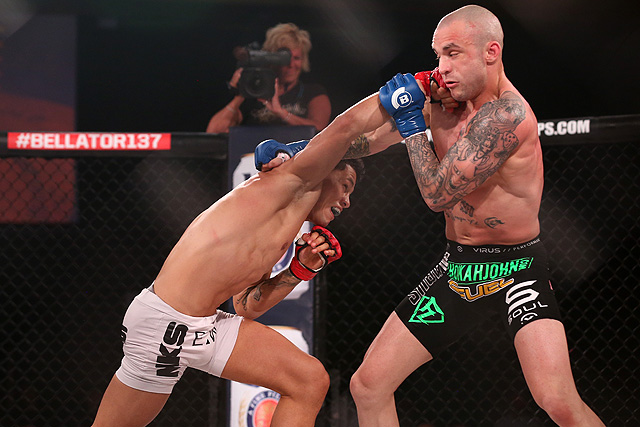 (+ Enlarge) | Photo: D. Mandel/Sherdog.com
'Dudu' toughed it out over Richman.


Eduardo Dantas took a significant step toward regaining bantamweight gold, as he captured a hard-fought unanimous decision against Mike Richman in the evening’s co-main event. All three cageside judges scored the bout 29-28 in favor of the Brazilian.

Dantas (17-4, 7-1 Bellator), competing for the first time since dropping the 135-pound belt to Joe Warren last October, successfully avoided his opponent’s vaunted knockout power. The Nova Uniao standout kept the pressure on Richman, consistently shooting for takedowns throughout the 15-minute affair. Dantas’ game plan became evident early, as he dragged Richman to the canvas repeatedly in the opening five minutes. On the feet, “Dudu” landed a number of kicks to the body while staying out of Richman’s favored striking range.

Richman (18-6, 7-5 Bellator) did his best work in round two, as he thwarted the majority of his Dantas’ shots and tagged him with jabs and straight lefts. He was unable to maintain that success in the final period, however, as Dantas followed up a spinning back fist attempt with one more successful takedown, a maneuver that likely clinched his victory. 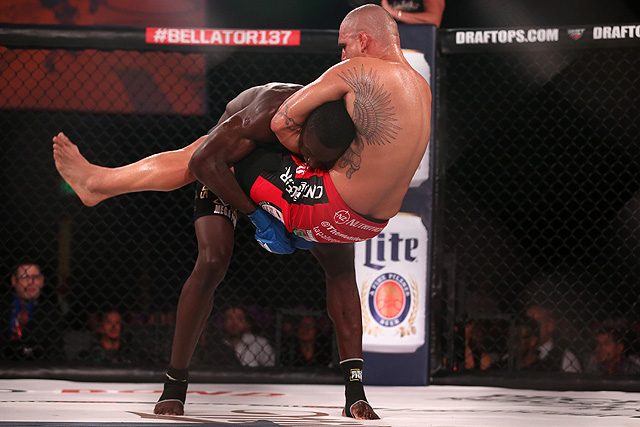 Potentially down two rounds to none on the scorecards, “The Menifee Maniac” rallied to submit Curtis Millender in the third round of their welterweight bout. A guillotine choke brought an end to the contest 1:14 into the frame. With the win, Gonzalez (24-13, 4-0 Bellator) adds Millender (7-1, 0-2 Bellator) to a recent list of victims that includes Marius Zaromskis, Karo Parisyan and Karl Amoussou.

“I felt that I won the first round. I knew if I won the third…I think I would have gotten the decision,” Gonzalez said. “Obviously I wanted to go for the finish just to seal the deal, but I knew he was going to come in ready after losing [his] last fight.”

Working from an upright stance with his chin held high, Millender appeared to be at least one full weight class larger than his opponent. The size advantage was apparent early on, as he kept Gonzalez at a safe distance with a steady diet of jabs and push kicks. Gonzalez remained aggressive but struggled to cut off the cage consistently.

In the final frame, however, Gonzalez was able to jump guard for a guillotine after kicking out Millender’s leg. Millender was initially able to pull his head free, but Gonzalez was able to secure the choke again from his back. Just moments after giving referee John McCarthy the thumbs-up, Millender asked out of the fight. 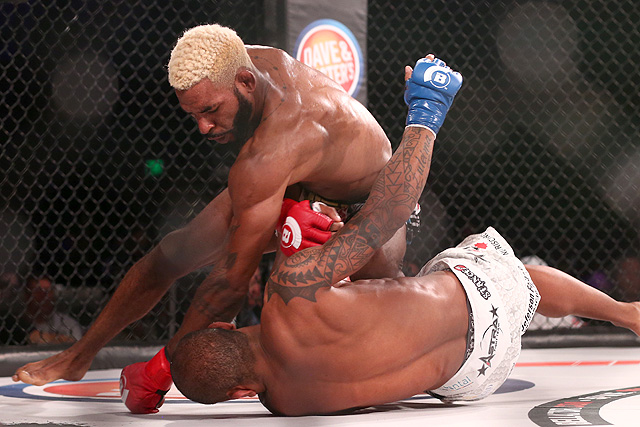 A blond-haired Darrion Caldwell was successful in his bantamweight debut, as he captured a unanimous decision triumph over the more experienced Rafael Silva in a featured 135-pound contest. All three cageside judges scored the bout 29-28 in favor of the 27-year-old New Jersey native.

In a bout that featured little in the way of meaningful offense on the feet, it was Caldwell’s consistent pressure and control that stood out most. A former NCAA national champion wrestler at North Carolina State University, Caldwell (7-0, 4-0 Bellator) landed takedowns in every round and was able to scramble out of danger on several occasions.

While Silva (22-5, 3-2 Bellator) initiated a few submission attempts -- two heel hooks in round one and a guillotine in the second frame -- he was unable to truly threaten his opponent.

“I’m coming for a title shot. Whenever Bellator feels like you guys are ready to give me a title shot, Scott Coker, I’m here to be your guy, your 135-pound champion” Caldwell said. “Give me the opportunity and I’m gonna thrive.” 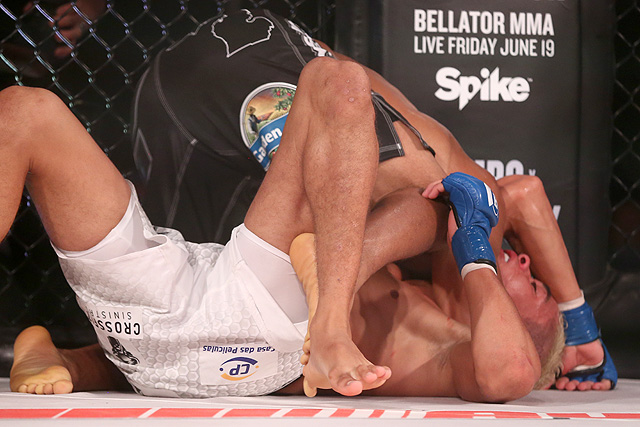