TOKYO -- Journeyman Kazuhiro Hamanaka notched a controversial win after Alavutdin Gadjiev was disqualified for a third-round illegal knee in the Cage Force & Valkyrie main event on Sunday at the Differ Ariake Arena.

In the first round, Hamanaka took the fight to Gadjiev and secured an early takedown. From half guard, Hamanaka threatened a kimura and then passed to side control. Gadjiev delivered an illegal knee to Hamanaka’s head from the bottom, which forced the referee to break up the action and deliver his first warning to the Russian. After the restart, Hamanaka again threatened with a kimura, which he might have finished had there been a little more time left in the round.

The second period started quickly, as Gadjiev landed a straight left and followed it up with a flying knee. Hamanaka quickly covered up and clinched Gadjiev into the fence. The bout was halted again, this time after Gadjiev grabbed the cage to avoid being taken down. Hamanaka worked for another takedown into side control, but Gadjiev thwarted his efforts by delivering another illegal knee to the head.

Gadjiev went all out in round three, as he connected with a strong straight right that visibly hurt Hamanaka. The International Fight League veteran went for a defensive takedown and ended up on the bottom after a scramble. From the top, Gadjiev posted Hamanaka’s head down and delivered another illegal knee. The referee stopped the match and awarded the win to Hamanaka by disqualification 1:04 into the final period.

In the finals of the Valkyrie women’s featherweight tournament, Mei Yamaguchi won a close judges decision over Takabayashi Kyoko, bringing her one step closer to the championship belt.

In the first round, Kyoko punched her way into the clinch and secured a takedown. “V Hajime,” however, used an active guard and prevented Kyoko from scoring big. From guard, she pushed off Kyoko and delivered an upkick to the head that was the most significant strike of the round. 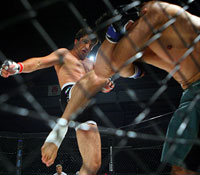 Daniel Herbertson/Sherdog.com
Alavutdin Gadjiev was
DQ'd for an illegal knee.
Kyoko took the center of the cage in round two and used her punches to score with a takedown. From the bottom, Yamaguchi reversed positions and landed on top. Kyoko stood up to escape and scored with another takedown. At the start of the third round, Yamaguchi closed in for the clinch and transitioned to an attempted rear-naked choke. Kyoko defended the submission and shook her opponent to the bottom, where Yamaguchi used her active guard to deliver strikes and attempt more submissions before eventually returning to an upright position.

The match was hotly contested. Had it been scored like a regular Valkyrie match, it might have ended in a draw, but because it was a tournament final and a winner had to be declared, Yamaguchi walked away with a split decision.

In what may go down as the most exciting match of the night, Tomonori Taniguchi earned a tough unanimous decision over Wataru Takahashi.

From the start of the first round, both fighters gave it their all. Takahashi threw high kicks, but Taniguchi seemed more comfortable with his strikes. After a single-leg takedown attempt from Takahsahi, Taniguchi nearly secured a front choke. From there, Taniguchi seemed to wear on his opponent with stalking strikes and excellent takedown defense. Takahashi kept throwing high kicks and attempting unsuccessful takedowns. In the third round, Taniguchi landed a left high kick that dropped Takahashi and secured the decision.

Ikkei Nagamura had the fastest finish of the night, with his spectacular technical knockout over Nobuhiro Tsurumaki. Nagamura found the distance for his right hand, which dropped Tsurumaki, and he quickly pounded his floored opponent. This forced the referee to stop the action 37 seconds into the first round.

Finally, Tetsuo Seto rode a strong third round to a unanimous decision against Sapp Nishinari. The first two rounds went back and forth, with each fighter landing combinations. Nishinari had a clean arm throw takedown at the beginning of the first, and Seto’s leg kicks took out Nishinari’s base in the second. In round three, Seto secured a takedown and transitioned to mount, where he continued to punch and elbow his way to a unanimous decision.