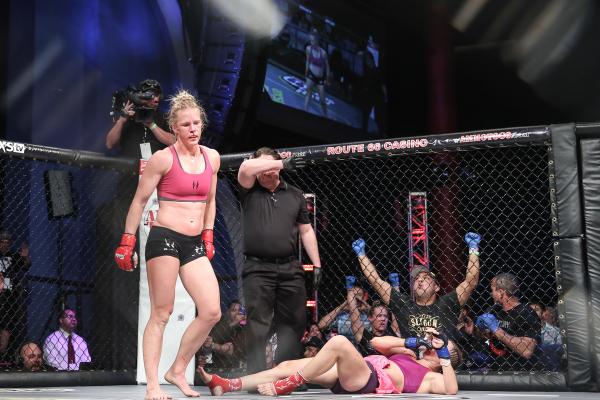 Holly Holm did it again with her kicking ability at Legacy FC 30. | Photo: Will Fox/Sherdog.com


ALBUQUERQUE, N.M. – She gained fame for her boxing, but Holly Holm remained unbeaten and earned her first MMA title on Friday night at Legacy FC 30, breaking down tough Brazilian Juliana Werner over five rounds before taking the promotion’s 135-pound women’s title with a head kick at the Route 66 Casino in Albuquerque.

The former pound-for-pound boxing star put on an inexorable performance, pushing the pace and landing a lopsided amount of strikes and kicks. Werner held her own, coming forward and countering regularly, but could not match the sheer number and power of combinations Holm tirelessly drilled in. The fight only went to the ground a few times and when it did, it was on Holm’s terms, as she caught Werner’s leg kicks and threw her to the ground.

Early in the fifth, a still-fresh Holm landed another roundhouse kick upstairs, this one badly hurting Werner. “The Preacher’s Daughter” pounced with strikes to finish and referee Raul Porrata waved the contest off at 1:50 of the final round. Following the fight, Holm, now 7-0, revealed that she may have sustained a fracture in her arm while blocking one of Werner’s kicks early in the fight.

At 155 pounds, former King of the Cage champion Donald Sanchez met seasoned Brazilian Flavio Alvaro over 15 minutes of constant action. Sanchez controlled the cage with superior striking and position, while Alvaro scored multiple takedowns. Although he was able to escape and work his way up each time, drilling in counters on the way up, Sanchez just couldn’t evade the takedowns of the Brazilian, who walked away with the unanimous verdict.

Flyweight prospect Ray Borg remains undefeated against Jackson-Winkeljohn MMA fighter Nick Urso. After nearly finishing the contest with a rear-naked choke late in the first, Borg went to work the second, gaining full mount and raining down heavy elbows. This time, the pounding opened up the RNC that Borg sought, giving him the win at 4:01 of the second.

Bantamweights Adrian Cruz and Enrique Briones fought to a draw after a questionable point deduction in the second round from referee Stan Savedraa. Briones took the second and third rounds, stuffing Cruz’s shots and taking top position for himself, but Savedraa docked him for a punch to the back of the head in round two that ended up being the difference on the cards.

Welterweight Martin Sano, who spent some of his camp with Nick and Nate Diaz brothers, took the opportunity to submit Jackson-Winkejohn MMA product Clint Roberts at 1:52 of the second round after Roberts slipped to the mat.