A 27-year-old UFC veteran, Healy banked a unanimous decision against the previously unbeaten Lyle Beerbohm in the Strikeforce “Challengers 14” main event on Friday at the Cedar Park Center in Cedar Park, Texas. All three cage-side judges scored it 29-28 for Healy, a Team Quest representative who has won four of his last five fights.

Beerbohm controlled the pace for much of the bout, relentless in pressing and smothering his seasoned opponent against the cage. However, he ran out of steam against Healy, a former welterweight, as the two men dug in their heels against one another. Healy delivered the more effective strikes standing, weathered Beerbohm’s scramble-heavy onslaught and nearly secured submissions in the second and third rounds.

“I think I outworked him, outhustled him and won the exchanges on the feet,” Healy said. “That’s where I took it.”

In defeat, Beerbohm did nothing to lower his stock in the 155-pound division. Undefeated in his first 15 professional appearances, he stayed in Healy’s face in the clinch and on the ground throughout their entertaining 15-minute encounter. Healy closed strong, as he scored with a takedown, seized partial back control, trapped Beerbohm’s arm and threatened with a rear-naked choke in the third round. Beerbohm escaped but appeared visibly winded when the two lightweights returned to an upright position. There, Healy scored with punches and stuffed a late takedown attempt, perhaps swaying the verdict in his favor.

The well-traveled Healy positioned himself nicely to face the winner of the March 5 encounter between Billy Evangelista and Jorge Masvidal.

“I’d really like that fight,” he said. “They both beat my brother. Being a proud Irishman, I want that revenge for the family.”

After a brief standing exchange, Prater put Travers on his back with a nifty inside trip. He locked on the choke during the ensuing scramble, tied up Travers’ leg and waited for the American Kickboxing Academy product to black out. A little more than half a minute after it began, their encounter was over.

The victory snapped a two-fight losing streak for Prater, who shed tears afterward. “No one likes to lose, and my record alone says I’m not a perfect fighter,” he said. “We’re up. We’re down. We lose our job. We’ve got to get up and look for another one. It’s been a hard couple of years. I don’t know what tomorrow brings for me.” 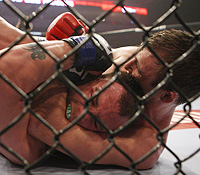 Couture, the son of UFC hall of famer Randy Couture, took a third-round submission from the game but overmatched Higgins in a featured lightweight duel. A rear-naked choke brought it to a close with only 19 seconds remaining in the third round.

The 28-year-old Couture controlled the fight in all phases with superior technique, as he switched between orthodox and southpaw stances and scored effectively with jabs, counter right hands and kicks to the body and legs. Couture nearly stopped Higgins in the waning moments of round one, first with a guillotine and then a brabo choke. Higgins survived, only to be punished further in the second round,
where Couture floored him with a crisp right hand.

Couture struck with a trip takedown with roughly two minutes to go in round three, moved to back control and went to work on the rear-naked choke. Higgins fought until the end, forcing Couture to readjust the hold several times. Ultimately, Couture found the right combination and coaxed the tapout.

“He was hand-fighting me like crazy,” he said. “He wore out both my forearms.”

Anchored at his father’s renowned Las Vegas gym, Couture has won each of his first two professional bouts by submission.

“I just want to continue to get more comfortable out there,” he said. “Getting almost 15 minutes in here was a big help.”

King of Kombat alum Ryan Larson dazzled in his promotional debut, as he submitted Erik Apple with a second-round triangle choke in a one-sided welterweight showcase. Apple tapped out 3:14 into round two.

Larson delivered takedowns in both rounds and ran a grappling clinic on Apple once the fight hit the ground. He held a topside crucifix position for much of the first round, twice threatening with kimuras from the top. Apple’s luck did not improve in the second. After another takedown, Larson moved to mount, forced his foe to surrender his back and locked in a body triangle. Heavy blows fell on Apple, as Larson deftly locked in the triangle from the top and took the submission.

Douglas Chokes Out ‘The Ghost’

Surging Cesar Gracie protégé David Douglas needed a little more than a minute to post his sixth victory in seven appearances, as he choked Nick Gonzalez unconscious with a first-round rear-naked choke in their featured catchweight match at 150 pounds. The finish came 65 seconds into round one.

Entering the cage with an enormous height, reach and strength advantage, Douglas swarmed his foe at the start and sent him to the canvas with an overhand right. Ground-and-pound followed, and Gonzalez ultimately surrendered his back. The choke came next, as Douglas snaked his muscular arms around the neck. Soon after, Gonzalez went limp.

“I’m ready to take on anybody,” Douglas said. “They know what’s coming. When I’m healthy and everything, nobody can beat me.”