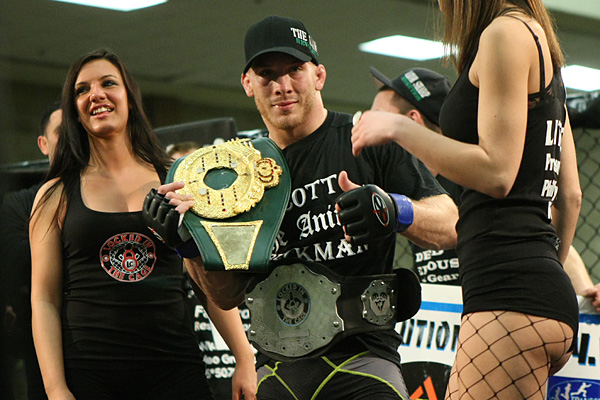 
The game has changed.

With the UFC putting out more product than ever before, the need for more fighters continues to grow exponentially. The Las Vegas-based promotion appears to have found another breeding ground for talent in Cage Fury Fighting Championships.

In the last month alone, former CFFC fighters Charlie Brenneman, George Sullivan and Aljamain Sterling have received the call up to the big show. With CFFC 31 being the promotion’s last card before a rumored regime change, two more potential call-ups –Jonavin Webb and Scott Heckman -- were on display at the Borgata Hotel Casino and Spa in Atlantic City, N.J., on Saturday night.

AMA Fight Club’s Heckman took on Jeff Lentz, who was returning to action after a two-year layoff. For Heckman, the game plan was simple: Pick your spots, lather, rinse and repeat. Heckman showcased his strong wrestling over the course of five rounds, while Lentz’s offense revolved around a flair for the dramatic. However, the one big knockout blow never landed though for Lentz as Heckman grinded his way to a split decision (50-45, 48-47, 47-48).

“Our gameplan [at AMA Fight Club] is to grind and wrestle and wear them down and press the issue forward and get them on their heels,” Heckman told Sherdog.com after the bout. “That’s where we get the fight where we want it. I thought he was going to be a lot faster with his setups. His setups were very visible and lined up a lot. Nothing great landed. I kept him guessing with level changes and he was pretty hesitant. That worked in my favor for the whole fight.”

Now 9-1 in his last 10 fights, Heckman may be the next guy to move to the next level. With Brenneman, Sullivan and Sterling the latest in a slew of fighters getting the call to the UFC, CFFC has put itself on the map for a lot of fighters on the cusp.

“That’s such a positive thing being in CFFC because they’re being noticed. Not just in Bellator or regional promotions either but [nationally] – the UFC,” Heckman said. “That’s great for this promotion and it’s only going to make this promotion (CFFC) grow. I think that’s really positive. There’s no other place that I’d rather be before the UFC than CFFC.”

The co-main event featured a welterweight bout between established local veteran Whitney Jean Francois and the aforementioned Webb. The Brazilian jiu-jitsu practitioner Webb approached the first round with some caution, as Francois’ bread and butter comes from his power and striking game. That approach cost him, however, as Webb’s takedowns came from too far out and allowed Francois to walk away with a 10-9 first round on the Sherdog.com scorecard.

“He hits hard,” Webb said. “My face kind of shows it right now. I have a lot of respect for him as a fighter. I tried to play it smart. I knew I had to turn it up more in the second and third rounds. First round I was staying too far away, giving him a bit too much respect. My corner told me to play my game and circle and find my takedown.”

Webb quickly turned the fight with that game plan in the second round. Very early on Webb scored that ever-elusive takedown and went to work. “Spyder” quickly maneuvered to his opponent’s back and turned a scramble into an armbar, finally forcing the tap 1:46 into the second round. The result moved Webb’s record to 5-0 as a professional.

“I still have a lot of work to do on my striking,” he said. “I feel on the ground I can handle almost anyone. I got a lot of work to do. I have good striking coaches to work with. Certainly (though) it’s getting back to work on Monday and get ready for the next fight.”

Two swing bouts followed the main event. Emmanuel Walo surprised Derrick Kennington with a sneaky left in the clinch in the second round that put Kennington down at the 4:22 mark of the period. Meanwhile, “The Hurricane” Shane Burgos less than two rounds to dispatch Myron Baker. The end came at 2:12 as Keith Peterson called an end to the bout after Burgos secured a rear-naked choke.

After an inauspicious pro debut, Jamelle Jones returned to the cage at light heavyweight to take on CFFC vet Danny Holmes. With a sharper striking game to go along with his already established wrestling, Jones was all over Holmes from the opening bell. Once he got Holmes on the mat he scored a submission win with the ever-elusive banana split 4:12 into the first frame.

The takedown proved to be the name of the game in a featherweight tilt between Brian Kelleher and Lester Caslow. Kelleher kept hitting it and Caslow couldn’t stop it. The Ithaca New York product turned one of those takedowns into a rear-naked choke, forcing the tap 1:34 into the second round.

At lightweight, Joey Rivera made quick work of Christian Leonard. Despite an early takedown, “Boom Boom” quickly flipped position and threw on a rear-naked choke, forcing the tap 3:07 after the opening bell.

Cheljean Erwin-Davis gave the fans the first submission of the night, as he used his size to his advantage against Micah Terrill. Erwin-Davis scored a takedown, quickly took Terrill’s back and secured a rear-naked choke to score the win 1:32 into the opening round.