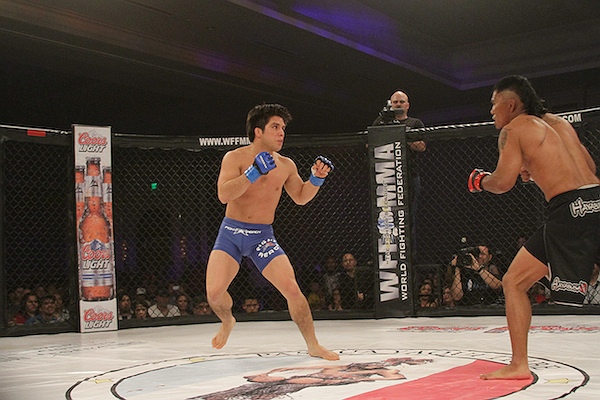 Henry Cejudo is out of UFC 177 due to medical reasons. | Jose de Orta/Sherdog.com


Henry Cejudo has withdrawn from his UFC 177 bout against Scott Jorgensen due to medical reasons, according to the promotion.

No further specifics regarding the 2008 Olympic gold medalist’s exit were given, although sources close to the event say the weight cut left Cejudo severely dehydrated. The news comes just a few hours before fighters hit the scales for Saturday’s event.

With Cejudo-Jorgensen off the bill, UFC 177 will move forward with nine bouts, including five on pay-per-view. The flyweight clash between Cejudo and Jorgensen was to be part of the Fox Sports 1-televised preliminary card. The evening's opening fight, a lightweight tilt between Cain Carrizosa and Chris Wade, now moves from UFC Fight Pass to FS1.

Cejudo is unbeaten in six bouts since making his pro debut in March 2013, including victories against Ryan Hollis and Elias Garcia while competing for the Texas-based Legacy Fighting championships. However, Cejudo failed to make weight for both of those bouts. In addition, he withdrew from a proposed clash with Damacio Page at Legacy FC 31 for personal reasons, while a bout with the stomach flu forced him out of a co-headlining appearance at Legacy FC 25.

After falling to Zach Makovsky and Jussier da Silva his first two flyweight outings, Jorgensen earned his first flyweight victory in the Octagon with a three-round verdict over Danny Martinez on June 7.

"Best wishes to Cejudo and hope he is good. Health is important," Jorgensen wrote on Twitter. "I'm just bummed I don't get to fight."

UFC 177 takes place at the Sleep Train Arena in Sacramento, Calif., and is headlined by a bantamweight title rematch between T.J. Dillashaw and Renan Barao.