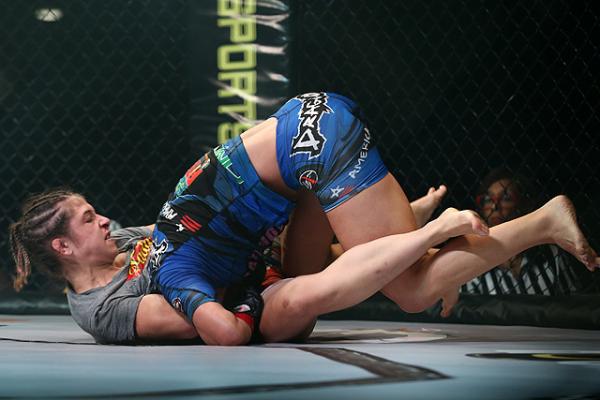 Herica Tiburcio submitted Michelle Waterson with a third-round guillotine choke to capture the organization’s 105-pound title in the Invicta FC 10 headliner on Friday at the Arena Theatre in Houston. Waterson (12-4) tapped out 64 seconds into round three, a shocking upset having come to fruition.

Tiburcio (9-2) brought the fight to the incumbent champion and engaged her on the ground, where she successfully navigated Waterson’s treacherous guard. “The Karate Hottie” attempted several armbars, none of which were successful. The tide began to turn in the challenger’s favor late in the first round, as the 21-year-old Tiburcio swept into top position and cut through the Jackson-Wink MMA representative’s defenses with a savage standing-to-ground right hand. The blow resulted in significant damage to Waterson’s left eye. The Brazilian carried the newfound momentum through the second round.

Early in round three, Tiburcio countered a Waterson kick with a takedown and ensnared her in the choke during the subsequent transition. A reluctant tapout came next, the Invicta championship changing hands in stunning fashion. 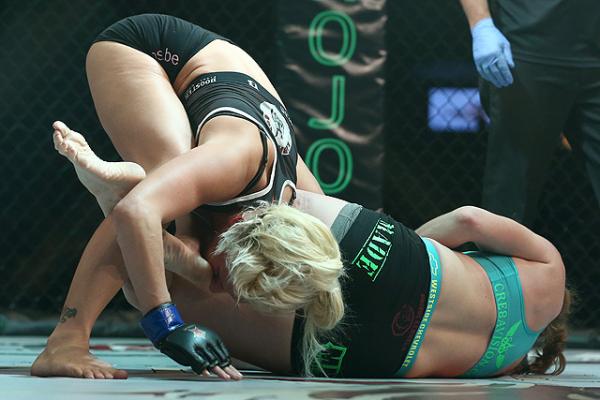 (+ Enlarge) | Photo: D. Mandel/Sherdog.com
Evinger again won by armbar.
In the co-main event, EliteXC veteran Tonya Evinger continued her climb on the women’s bantamweight ladder, as she submitted Cindy Dandois with a second-round armbar. Dandois (5-2), who had not competed since March 2011, conceded defeat 83 seconds into round two.

Evinger (14-5) never took her foot off the gas. She battered Dandois throughout the first round, as she advanced to a mounted crucifix position and later shifted to back mount and full mount. Dandois wandered back into trouble early in round two. There, Evinger countered a takedown attempt from the Belgian, moved to her back, climbed to a modified triangle choke and then transitioned
to the fight-finishing armbar.

The 33-year-old Evinger has rattled off six consecutive victories. 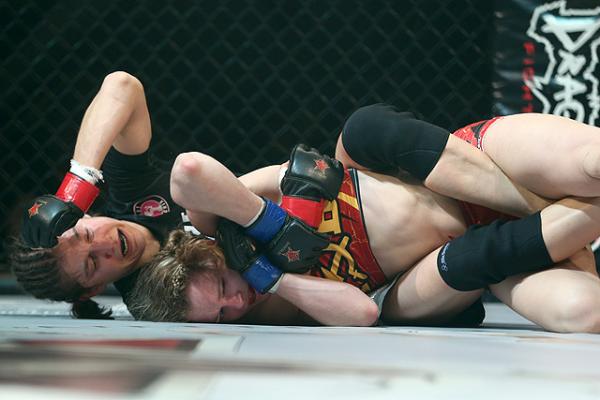 (+ Enlarge) | Photo: D. Mandel/Sherdog.com
Modafferi took a split decision.
Meanwhile, a resurgent Roxanne Modafferi recorded her second straight win, as she took a split decision from the previously unbeaten Andrea Lee in a featured matchup at 125 pounds. Two of the three judges ruled in Modafferi’s favor by 29-28 and 30-27 counts; a third cast a dissenting nod for Lee (2-1).

Modafferi (17-11) delivered multiple trip takedowns and short-circuited the Karate Mafia export’s plans with an active top game. Lee enjoyed success on the feet, particularly with her kicks to the body and legs. However, she spent too much time on the ground with Modafferi, and “The Happy Warrior” was happy to oblige her there.

The well-traveled 32-year-old did her best work in the third round, where she executed a takedown and transitioned between full mount and back mount, briefly threatening Lee with a rear-naked choke. 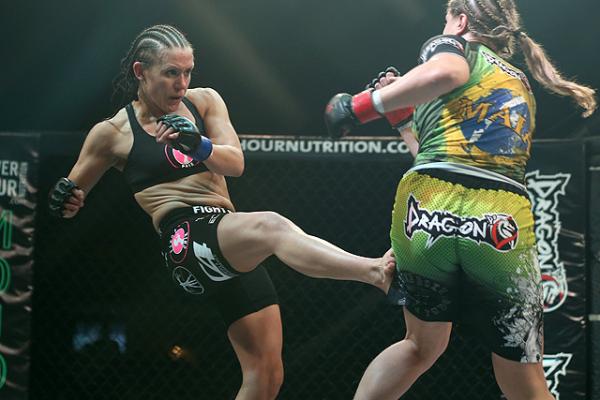 Maia (9-4) had her moments, as the Chute Boxe standout scored with an arm-drag takedown in the second round, leaned on persistent forward movement and unleashed a torrent of right hands, including a Superman punch and ringing uppercuts. However, Bennett maintained her composure under duress, countered effectively throughout the 15-minute affair and attacked with various
kicks to the legs and body.