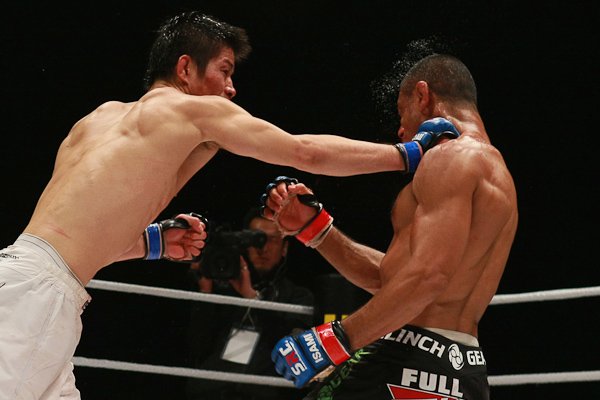 Hioki was dominant in all phases: in the first round, he used his prodigious reach to land both strong jabs and kicks, but was also able to take Sandro's back briefly. Over the first half of the bout, Hioki's superior reach and movement allowed him to outland and counter the aggressive Brazilian, who sought to land the kind of heavy blows that put both Tomonari Kanomata and Masanori Kanehara on stretchers in less than a minute combined earlier this year.

Hioki's attack tired Sandro, and by the third round, Hioki seemed to have entirely figured out his foe's timing on the feet. It was at that point that Hioki put the pedal to the floor. Hioki took the Nova Uniao black belt down and punished him with punches on top, before locking up a tight straight armbar that nearly popped the champion's elbow. 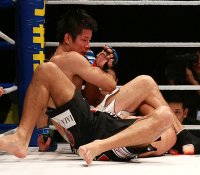 T. Irei
Sandro refused to tap to Hioki.
The fifth and final round was Hioki's finest. While defending a Sandro takedown attempt, Hioki pinned the champion's arm behind his back in a hammerlock, which he used to transition into a kimura and a fully-extended armbar. The submissions were so tight that Sandro's veins bulged as he held on, but he refused to tap. Sandro made it to the final bell, consoled only by cheers from the appreciative Ariake Coliseum crowd.

Judges Minoru Toyonaga, Takashi Kobayashi and Masanori Ohashi scored the bout 50-47, 49-47 and 48-47, all for the new champion, Hioki.

"I don't really know what to say, honestly," said the characteristically taciturn Hioki after his triumph. "I haven't even really thought about what comes next year."

"I want to be a fighter that gives people inspiration, to give them courage. Over the years, so many people have done that for me. They've given me courage and support, and without them, I could not have achieved this today. Thank you all," Hioki said, bursting into tears and dropping the microphone to the canvas.

Hioki's win capped off a 27-bout all-day fight festival for SRC, which was saw 17 MMA bouts and 10 kickboxing affairs. With the victory, Hioki adds the SRC title to the TKO featherweight crown he held at the time of the promotion's dissolution, as well as the Shooto world title he won from "Lion" Takeshi Inoue in May. In defeating Sandro, he also bested the current featherweight King of Pancrase.

In the finals of SRC's welterweight grand prix, UFC and Dream veteran Keita "K-Taro" Nakamura bested Yasubey Enomoto on the feet as well as on the ground.

Just moments into the bout, Nakamura scored a flash knockdown on Enomoto that gave him top position for much of the first round. Enomoto worked an active guard from bottom, attempting to lock "K-Taro" in rubber guard in between throwing punches from bottom. It became clear in the second round that the early knockdown was no accident, as the southpaw Nakamura was able to trade blow-for-blow with Enomoto, whose striking had proved dynamic through much of the tournament.

Following their wild exchanges on the feet, Nakamura took his Swiss foe back down to the ground, where he secured back mount and quickly sunk in his specialty -- the rear-naked choke -- prompting the tap from Enomoto at the 3:48 mark. 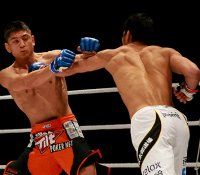 T. Irei
Nakamura's striking helped make
the difference against Enomoto.
The tournament victory earned Nakamura a 3 million yen -- approximately $37,000 USD -- bonus on top of his fight purse, and possibly a bout to crown the first SRC welterweight champion next year.

The combination of Nakahara's lunging punches and Tamura's reflexive low kicks resulted in three different stoppages for low blows during the first round; the second of which earned him a red card and a point deduction. The final low blow was too much for both Nakahara and the ringside physicians, however, as the doctors asserted that Nakahara's groin had sustained too
much damage. The bout was called at 2:07 in the first period for the pained Nakahara.

In the other bantamweight semi-final, ZST standout Shunichi Shimizu bested bantamweight King of Pancrase Manabu Inoue on the scorecards by merit of his more dynamic grappling.

Inoue controlled the opening stanza with takedowns and grinding punches, but Shimizu's scrambling took over in the second, where he locked up an armbar and a reverse triangle attempt. Judge Minoru Toyonaga saw the bout 20-19 for Shimizu, while judges Masanori Ohashi and Takashi Kobayashi ruled it 19-19 and 20-20, respectively. Both Ohashi and Kobayashi gave their must decision votes to Shimizu, who took the unanimous decision.

Nakahara and Shimizu will meet in February at a yet-to-be-scheduled SRC event to determine the promotion's first bantamweight champion.

In the three-fight SRC-versus-Dream series, Sengoku prevailed, but its former champion Masanori Kanehara was knocked off in just 97 seconds by Yoshiro Maeda.

Kanehara dazed Maeda with a right hand almost immediately, and quickly moved in to finish. Swinging with reckless abandon, Maeda instead rocked Kanehara and turned the tables. Kanehara dropped for a leg out of desperation, but ate more punches. Maeda landed two swiping right hands on the retreating Kanehara to put him down on the mat, at which point referee Tomoki Matsumiya lunged for the stop, perhaps a moment too soon. 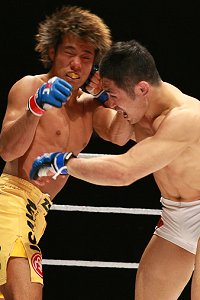 
"I came into this fight as the enemy of SRC, but I really respect Kanehara who as a former champion took this fight when he didn't have to," Maeda said after the bout.

The "Knockout of the Night" belonged to late replacement Taisuke Okuno, who flattened UFC and Pride veteran Ryo Chonan in just 19 seconds.

Okuno entered the bout on less than a week's notice after Chonan's original opponent, Dan Hornbuckle, was forced out due to influenza. Okuno likely needed a finish to win the bout, as he weighed in at 176 pounds at Wednesday's weigh-ins, and was assessed two red cards -- a two-point deduction -- to begin the bout.

However, as soon as the bell rang, Okuno was able to land a wide right hook across Chonan's chin, separating him from consciousness. Referee Samio Kimura lunged for the save, whereupon Okuno did his best King Leonidas impression, shouting into the microphone, "This is Sengoku!"

It was clear from the outset that the Venezuelan dynamo wouldn't have his way with "Parky" the way he had with his other recent opponents, as the Korean was able to withstand Blanco's punches and retaliate. However, Blanco managed to land enough on the cautious, circling Korean. Though judges Masanori Ohashi, Minoru Toyonaga and Takashi Kobayashi all scored the bout a draw (30-30, 29-29, 29-29), all three awarded their must decision to Blanco.

Women's action is usually a rarity during Japan's slate of New Year's events, but not so at "Soul of Fight." In the biggest women's bout of the evening, superstar Megumi Fujii took a hard-earned decision over an extremely game Emi Fujino. 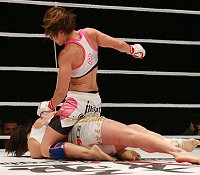 T. Irei
Fujii dominated Fujino but she
just wouldn't quit.
Fujii controlled Fujino on the ground, landing hard punches and pushing Fujino down to the mat to continue the ground assault rather than aiming for her usual submission finish. Though Fujii clearly dominated the first two rounds, Fujino couldn't be discouraged and landed hard counterpunches as the fight wore on despite Fujii's repeated takedowns. By the final bell, judges Takashi Kobayashi, Tomoki Matsumiya and Masanori Ohashi ruled the bout 30-29, 30-28 and 30-27 in favor of Fujii.

"I'm grateful for the chance to be a part of a woman's bout on a New Year's card," Fujii said following the victory. "As a female fighter, it was important to me to perform in a way that we wouldn't lose out to the men's fights. So please, continue to support women's MMA."

Hitomi Akano and Roxanne Modafferi were set to meet in the evening's other major women's clash. Unfortunately, the fight was canceled at the 11th hour.

Modafferi and Akano made their way down to the ring only to have the ringside physician call the bout before it even happened. According to the doctor, Modafferi was suffering from gastritis, making her unable to take in any kind of food or fluids outside of water. Both fighters were emotional and teary-eyed as the verdict was announced.

"I feel like this was my big chance to not only make a name for myself in Japan, but finally face Akano, who I'd been wanting to fight for years," Modafferi told Sherdog.com following the cancelation. "My body betrayed me and left me quaking with fever and chills. I pray I get another chance."

Elsewhere, Valkyrie open-weight women's champ Rin Nakai put Mika Harigai away with little trouble, easily taking "Hari" down and forcing her to tap to a keylock at 2:09 of the first round.

After blocking a high kick, Misaki took Seal to the mat, easily passed to mount and forced Seal to give up his back. Misaki flattened him out and proceeded to punch the sides of his head until referee Yoshinori Umeki had no choice but to step in for the stop at 1:15 of the first frame.

"Japanese are strong!" Misaki shouted after the bout, to a round of applause. "I'll put my life on the line for the brave audience for my future fights." 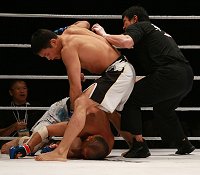 T. Irei
Narantungalug scorched Yokota
in just over two minutes.
In a scramble, Narantungalag put Yokota to sleep with a massive, swiping left hook. Referee Yoshinori Umeki immediately halted the bout at 2:03 of the first round, as Narantungalag's corner exploded in the ring to tackle him before he dropped more punches on the unconscious Yokota.

Former SRC title challenger Mamed Khalidov made short work of Japanese veteran Yuki Sasaki. The Chechen landed a brain-scrambling upkick on Sasaki and followed up with punches. Sasaki covered up under the assault, forcing referee Ryogaku Wada to dive in for the save at 2:22 of the first.

Dave Herman won a unanimous verdict (30-27, 30-27, 30-28) over notorious heavyweight Yoshihiro "Kiss" Nakao in an uneventful affair. Though Herman easily secured back mount in every round, he couldn't finish.

The afternoon featured three "jacket rules" bouts; essentially MMA with fighters donning gi jackets, and judged based on a system of striking and grappling points over one five-minute round.