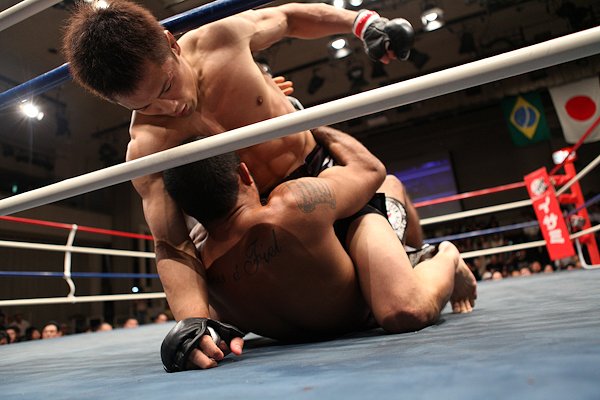 Dean Marchand
Hironaka steamrolled Diniz.
After putting being put on his back near the ropes, Nova Uniao product Diniz twisted for a heel hook and then a kneebar. Hironaka defended against the leg locks by raining heavy punches, softening his Brazilian challenger just enough to briefly take mount for more punishing ground-and-pound. Referee Toshiharu Suzuki almost called the bout there, but Diniz managed to escape the mount. What he could not escape was more of Hironaka’s punches, as the champ stayed close above him, dropping brain-rattling bombs until Suzuki mercifully stepped in at the 4:05 mark of the first round.

“I believe I perform better against foreign fighters than I do against Japanese fighters,” said Hironaka, post-fight, subtly hinting that his sights may be set on a cage overseas. However, when asked about a potential return to the UFC, the Shooto champ remained humble.

“I want my revenge in the UFC, but they need to believe I meet their standards first,” Hironaka explained. “If I get an offer [to return], it’s not because I dominated in a fight like tonight’s. Even if I win in close fights, it’ll have to be against very high-level opponents.”

Having seen Okazaki batter the belt’s previous owner, Shuichiro Katsumura, in April 2011, Ogikubo wisely mounted a conservative ground campaign, racking up punches from mount and back-mount in the opening frame. Okazaki prevented a repeat of this in the second frame by staying in top position to drop walloping punches while Ogikubo attempted armbars and foot locks. D. Marchand
Ogikubo got a royal ride after
upsetting Okazaki for the title.
The exertion from this apparently sapped the champion, as he was unable to power out from underneath Ogikubo in the third round after succumbing to another takedown. A patient Ogikubo bided his time until capturing Okazaki’s back to sink the fight-ending rear-naked choke for the tap at 3:32 of round three.

“I came to Tokyo seven years ago, wanting that Shooto title. This year, my child was born and I finally captured this title,” claimed the newly belted Ogikubo after the fight. “As champion, I think I’ll rest up for half a year and then I’ll take on [Kyoji] Horiguchi.”

Though mostly known for his superlative grappling prowess, Nakamura showed little hesitation in swinging for the fences against Sasaki. While this brash stance earned him a bloody nose in the final frame thanks to Sasaki’s well-placed counterpunches, the repeated takedowns and relentless ground-and-pound of “K-Taro” were more than enough to convince judges Suzuki, Tomohiro Tanaka and Tadashi Yokoyama to give him a full set of 30-27 scorecards.

In undercard action, Wataru Miki skated by Mach Dojo’s Yoshifumi Nakamura in an otherwise tepid 143-pound affair. Southpaw Miki took the center of the ring, where he counter-jabbed Nakamura’s flurries and reversed takedown attempts. Regardless, Miki had his hands full, eating his fair share of punches while fighting to stay on his feet as the dogged Nakamura pressed the action. By bout’s end, even Miki registered an expression of mild surprise when judges Tanaka and Yokoyama’s scorecards read 30-28 and 29-28 in his favor, while judge Suzuki’s read 29-28 for Nakamura. D. Marchand
K-Taro played conservative on top.
Stiff southpaw jabs, relentless diving takedowns and a go-for-broke grappling style was Kota Shimoishi’s winning combination against Koshi Matsumoto in their 154-pound bout. A conservative Matsumoto had his moments in reversing Shimoishi on the canvas and threatening with guillotines and rear-naked chokes, but Shimoishi won judges Tanaka, Hiroyuki Kanno and Suzuki over with his reckless aggression, netting 30-28, 30-28 and 29-28 cards from them, respectively.

Early in the evening at 154 pounds, Akira Okada reversed an overzealous Fumihiko Kawamura takedown attempt and slapped on a rear-naked choke for the tap at 3:25 of the first period.

Just prior, in a 163-pound catchweight bout, Koji Nishioka pinned Yoshikazu Fujiishi to the canvas to grind out a 20-18 unanimous decision on judges Suzuki, Yokoyama and Kanno’s scorecards.