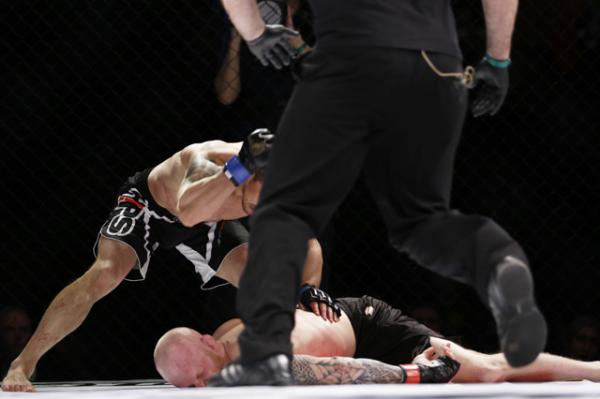 
UFC veteran Diego Nunes made a successful second trip to Sweden, brutally knocking out former Dream and Shooto world champion Joachim Hansen in the second round of their featherweight main event at Superior Challenge 11, claiming the promotion's 145-pound title at the Axa Sport Center in the city of Sodertalje.

“I am a fan of this guy,” said the jubilant Nunes, who could barely stand following the contest. “I broke my knee in the first round.”

While hobbling around, trying to avoid a winging Hansen, Nunes threw a right hand that just missed the Norwegian, but the left hand behind it dropped “Hellboy” straight on his face and garnered an instant stoppage at 1:51 of the second round.

The 31-year-old Nunes, now 19-6, had lost three in a row between the UFC and Bellator cages prior to the knockout win. Hansen, 35, falls to 23-13-1 and was knocked out badly by South Korean Doo Won Seo in their Road FC contest this past May.

In the other title contest, undefeated British bantamweight Ed Arthur used his superior grappling to keep top position against muay Thai fighter Martin Akhtar. Arthur found his way to top position in most scrambles, and came close with a rear-naked choke in the third frame. The new Superior Challenge 135-pound champion is 5-0 as a pro, with Akhtar being the first man to take him the distance. 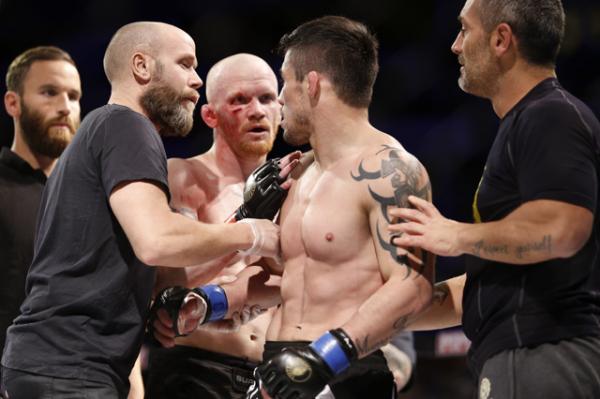 (+ Enlarge) | Photo: MMAViking.com
Hansen suffered another rough KO loss.
Swedish middlweight prospect Max Nunes cruised his way to a unanimous decision over France's Patrick Vallee. With training partner Alexander Gustafsson in his corner, the Allstars Training Center fighter outpointed Vallee with his ground-and-pound, taking a consevative approach due to what he admitted to Sherdog.com was a lingering illness.

UFC veteran David Bielkheden tapped Florent Betorangal with a kneebar with just one second left in the second round.

“I waited till I heard the 10 second warning,” said Bielkheden, who went for one of his go-to moves to secure the finish. The Swedish MMA pioneer has now won three straight bouts.

Besam Yousef was in trouble in the second round as Max Duarte landed big left and right hands rocking the Gothenburg fighter. But, moments later it was the UFC veteran that found a brabo choke on the ground to earn the finish.

Middleweight Diego Gonzalez pulled off a third-round guillotine to bring the crowd to the feet in Sodertalje, just minutes from where he grew up. Karim Mammar landed nice low kicks and body kicks leaving the Swede with red marks all over his body before as he was on his way to a decision victory before the turnaround from “The Silencer.”

Welterweights Mohamed Sayah and Abbe Joof fought to a draw, after a one-point deduction in the second round for a headbutt from Sayah evened the scores at 28-28 for the judges.

On the undercard it was featherweight Simon Skold who brought the fans to their feet with his powerful strikes. The Swede, who has become a tabloid star by dating author Camilla Lackberg, raised eyebrows by stopping Dan Gibbon at 0:51 of the second round. Elsewhere: lightweight Fernando Gonzalez, who put in time at American Top Team for this camp, landed big knees to the face of Roberto Pastuch in the third round solidify his unanimous decision win; Allstars Training Center featherweight Michel Ersoy took a unanimous nod over Pancrase Gym’s Martin Fouda in the only Stockholm-versus-Stockholm bout; at lightweight, Jonathan Svensson edged out Canadian Derek Gauthier while local Michael Yayo beat Faissal Harrar, both by unanimous verdict; and light heavyweight Paul Amelia started the night off with a crushing right-hand knockout of David Diaz at 3:45 of the first round.

Ryan O’Leary is the founder of MMAViking.com.