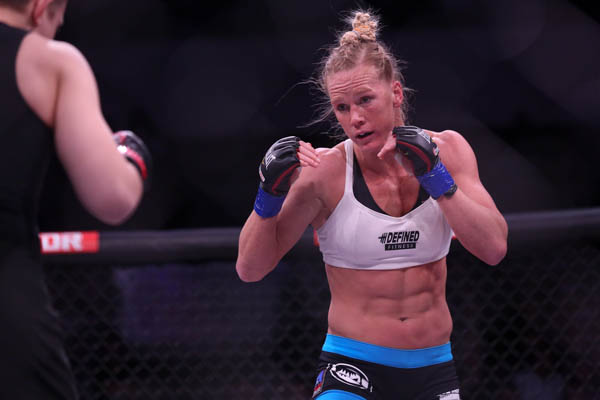 LFC promoter Mick Maynard informed Sherdog.com of the booking on Thursday, though Holm does not yet have an opponent. LFC 24 takes place Oct. 11 at the Allen Event Center in the Dallas suburb of Allen, Texas, and is headlined by a bantamweight showdown between UFC veteran Damacio Page and Ryan Benoit.

Maynard also revealed a changed to the Texas-based promotion’s September offering, as D.J. Linderman will replace Sammy Smith at LFC 23, which takes place at Cowboys Dancehall in San Antonio. According to Maynard, Smith was forced to withdraw from his bout with Richard Odoms after being bitten by a brown recluse spider.

Following a long and successful career as a pugilist, Holm retired from boxing earlier this year in order to focus on MMA. Following a one-sided win over Katie Merrill under the Bellator banner, “The Preacher’s Daughter” stopped Allanna Jones in her Legacy debut, knocking out “Hands of Stone” with a second-round head kick at LFC 21.

Linderman, meanwhile, will make his third LFC appearance next month. Following a brief run in Bellator two years ago, “Da Protege” went on to sign with the World Series of Fighting last year. Linderman was knocked cold by UFC alum Anthony Johnson at WSOF 1 and was later submitted by jiu-jitsu ace Robert Drysdale this past April at LFC 19. The Californian has since competed twice more, stopping Michael Kita on May 24 before outpointing Mike Hayes just one month later at Nick Diaz’s War MMA 1.