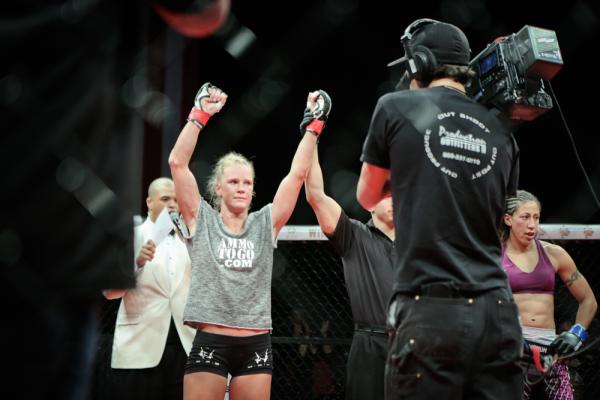 Holly Holm improved to 6-0 with a victory over Angela Hayes. | Will Fox/Sherdog.com


ALBUQUERQUE, N.M. -- For the first time in her brief mixed martial arts career, Holly Holm saw the judges’ scorecards in a fight. Judging by the results, she liked the deeper waters just fine.

Holm earned her sixth consecutive professional MMA victory on Friday night at the Route 66 Casino, taking a clear-cut unanimous decision over Angela Hayes in the bantamweight headliner at Fresquez Productions “Havoc.” Judges Mark Sanchez, Raul Porrata and Levi Martinez all scored the bout 30-27 in favor of Holm, who had earned her previous five victories by knockout or technical knockout. Hayes falls to 6-7 in defeat.

In previous efforts, Holm often overwhelmed her opposition with a kickboxing-heavy approach. This time the Jackson’s MMA standout was able to showcase a few other aspects of her game, including a little bit of ground-and-pound.

“She had a good clinch and on the ground she made it hard for me to tee off on her. It’s the first time I’ve been there (the ground) in a fight,” Holm said.

The opening round proved to be the most difficult, as Hayes was able to close the distance and force Holm into a grinding battle in the clinch. Still, Holm appeared to be the stronger fighter and was able to control the struggle for positioning, tossing the Colorado-based fighter to the floor late in the frame.

Holm was able to find her range in round two, connecting with a variety of accurate kicks to the knees, legs and body. The New Mexico native appeared to hurt Hayes with a pair of hard body kicks late in the frame, but the 40-year-old Rough House MMA & Fitness representative made it to the end of the period.

A steady diet of low kicks to Hayes’ lead leg were Holm’s weapon of choice early in round three. Later, Hayes showcased admirable resilience by remaining upright after absorbing back-to-back head kicks from the former world champion boxer. When a wobbly Hayes attempted to clinch out of sheer desperation, Holm dragged her to the mat and moved into full mount, where she attacked with measured ground-and-pound. One final takedown in the waning seconds capped off the victory.

It was the longest time Holm had spent on the ground in her caged career to date.

“I’m glad it went there. Even toward the end of the third I thought, ‘Oh my God, just try a takedown and see.’ I need to really just believe in myself with some of that stuff,” she said. “It was great to be able to go on the ground a little bit and I felt all right being there.”

In the cage after the bout, Holm spoke only briefly about an eventual move to the UFC.

“I want to take whatever opportunity that’s in front of me that’s the best,” she said.

In the evening’s co-headliner, Cody East overwhelmed Esteves Jones with a barrage of strikes against the fence in the opening round of their heavyweight tilt. Jones wilted under East’s assault 1:51 into the initial stanza.

East began the contest by slamming his opponent to the canvas and landing knees to the body. It was when Jones returned to his feet, however, that the real damage was done. Two right hands and a series of knees had Jones reeling, and East did not relent, finally dropping his man with another right hand and sealing the deal with strikes on the ground.

“I knew if I just touched him with this right hand he’s gonna go to sleep. That’s my patent,” said East, the reigning King of the Cage heavyweight champ. Elsewhere, Chuck Pieritz rode takedowns, positional control and ground-and-pound to a unanimous decision over Cris Leyva in a welterweight affair. Judges Raul Porrata and Levi Martinez scored it 30-27 for Pieritz, while Mark Sanchez submitted a 29-28 tally in favor of the Jackson’s MMA fighter.

A natural featherweight, Pieritz delivered a total of eight takedowns in the bout. While Leyva had some success with kicks in the early going, it didn’t take long for Pieritz to assert himself with wrestling. On the canvas, Pieritz landed vicious knees to the body and passed his opponent’s guard on multiple occasions. “When I came in I was a wrestler, now they’re teaching me how to fight,” said Pieritz, who has been at Jackson’s MMA for approximately nine months. Earlier, Gabriel Benitez halted a two-fight skid with a second-round technical knockout of a game Rey Trujillo in a featherweight bout. The end came 3:25 into the second period as the Mexican fighter unloaded on Trujillo with a series of unanswered right hands on the canvas.

Benitez, who came in two-and-a-half pounds overweight, got all he could handle from Trujillo in the contest’s first five minutes. The Houston-based fighter countered Benitez’s kicks effectively and even stunned the Jackson’s MMA product with a right hand near the fence. Trujillo’s offensive arsenal included a cartwheel kick and a spinning back elbow, both of which missed their intended target.

Trujillo slowed down considerably in the second frame. A failed takedown attempt resulted in a nasty kick to the body from Benitez, who then unloaded with right hands as his foe turtled up near the fence.

Jackson’s MMA flyweight prospect Nick Urso earned his sixth consecutive victory, stopping Jesus Urbina with strikes just 19 seconds into their flyweight bout. Urso clipped his opponent with a right hand almost immediately, then followed Urbina to the ground with a barrage of follow-up punches. Referee Robert Romero then stepped in to halt the bout, much to the dismay of both Urbina and his corner.

“I will fight all night; I will fight until someone pulls me off,” Urso said. “I could feel a limp body. It is what it is, there isn’t much more I can do.”

Clint Roberts first professional appearance in 18 months lasted just 38 seconds, as the Jackson’s MMA product stopped Eduard Gamboa due to a cut in the opening frame. After an early exchange, Roberts landed a knee, tied his man up and drove him into the corner. With Gamboa bleeding profusely from the bridge of his nose, referee Stan Saavedra paused the welterweight bout so the cageside physician could examine the wound. Moments later, the contest was halted.

“His nose is broke bad, but he didn’t go down at all. So hat’s off to him; he’s tough. I think the doctor quit that one for him,” Roberts said.

Three amateur bouts began the card: Kelly Westby captured a unanimous verdict over Matthew Baca (30-27, 30-27, 30-27) at lightweight; Nate Armstrong pounded out a TKO victory over Anthony Morales 2:50 into the opening frame at featherweight; and Jerome Rivera submitted Ricky Esquibel with a rear-naked choke at the 2:21 mark of round one at 125 pounds.