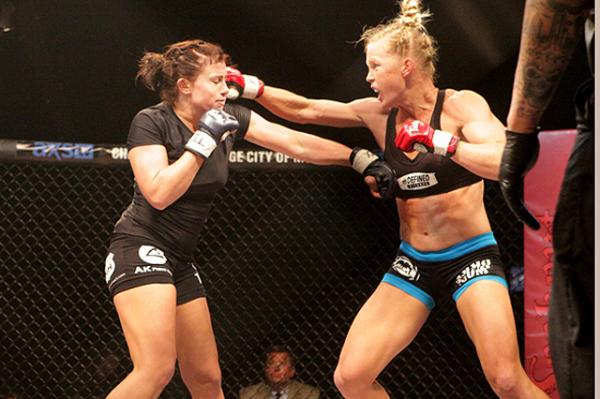 Multiple outlets reported on Thursday that the ex-world champion boxer sustained a neck injury during practice that will force her to pull out of a planned UFC 181 showdown against Raquel Pennington. The website MMA Byneko initially brought word of Holm’s withdrawal.

According to a report in the Albuquerque Journal, Holm wanted to go forward with her bout against Pennington, but manager Lenny Fresquez vetoed that notion.

“There was no way I was going to let her do that. She’s pretty devastated,” Fresquez told the Journal.

After a highly-publicized negotiating process, Holm signed with the UFC this summer. The 33-year-old Jackson-Wink MMA product is 7-0 as a professional, including appearances with Legacy Fighting Championship and Bellator MMA. In her most recent outing, Holm scored a fifth-round TKO of Juliana Werner at LFC 30 to capture the promotion’s 135-pound belt.

A replacement opponent for Pennington has yet to be announced. UFC 181 takes place at the Mandalay Bay Events Cent in Las Vegas on Dec. 6 and features a pair of title tilts, as Johny Hendricks defends his 170-pound strap in a rematch with Robbie Lawler, while Anthony Pettis puts his lightweight championship on the line against Gilbert Melendez.