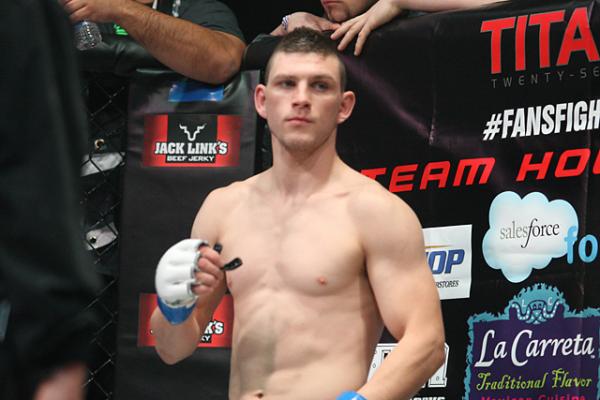 Green, who had to shed his trademark dreadlocks in order to make weight, had his moments, but he didn’t make enough of an impression to retain the title he earned with a victory over Steven Siler at Titan FC 32 last December.

Instead, it was Holobaugh’s ability to keep the fight upright and hold his own in exchanges that ultimately won the day. Although his face wore a fair amount of damage at the bout’s conclusion, the Louisianan was the initiator of much of the fight’s offense.

In the evening’s co-main event, Chase Gormley (12-4) garnered a somewhat surprising split decision victory over Jon Madsen to claim heavyweight gold. Two judges saw it 48-47 for Gormley, while a third awarded a 49-46 scorecard to the Reign MMA representative.

A relatively svelte Madsen (8-2) threatened to end things early, as he rushed Gormley with an aggressive flurry of punches in the first round. Gormley survived the barrage, which would become a recurring theme throughout the contest.

While the quicker Madsen landed the fight’s most noteworthy punches, he began to tire as time passed. That allowed Gormley to seize control with consistent, if not spectacular offense. Madsen also paid for failed takedown tries in rounds three and five, which allowed Gormley to finish both frames in an advantageous position.

Madsen’s most memorable moment down the stretch came in the fourth, when he had Gormley stumbling after connecting with a series of punches. The salvo prompted a pause in the action to examine a cut near Gormley’s left eye. Madsen’s inability to put his foe away ultimately came back to haunt him, however, as Gormley was rewarded by the judges’ for his overall output.

Earlier, Pat Healy’s durability and veteran guile ultimately proved too much for Kurt Kinser to overcome, as the UFC, Strikeforce, IFL and WEC veteran wore down the previously unbeaten prospect over the course of five rounds to capture a split decision and the vacant Titan FC 155-pound strap.

Kinser started strong, landing in side control after a headlock throw in the opening moments of the initial stanza. He then trapped Healy’s arm with his legs and began cranking his opponent’s neck – all while landing ground-and-pound in the process. Healy eventually escaped the predicament, and he gradually asserted his will from there.

“Bam Bam” turned the tide late in round two, pounding away from back control as time expired. He threatened with submission attempts in rounds three and four before spending most of the final frame attached to Kinser’s back to seal the victory.

The lanky Watson (13-8), who has 10 career submission victories to his credit, was unable to ensnare his foe within his dangerous guard. Johns began to assert himself late in round one, as he landed a takedown and bloodied “The Gazelle” with a series of elbows before the frame expired.

Johns (11-0) went right back to work in round two, taking Watson down at the outset of the period, landing purposeful ground-and-pound while avoiding submissions. He was eventually able to take his foe’s back as Watson attempted to return to his feet. From there, the 23-year-old was able to sink in his hooks and force a standing Watson to tap shortly thereafter.

“The Bull” was consistent with his pressure, as he rarely allowed Bollinger space to work. Harrison took his man down in every round and remained busy on top with positional advancements and steady ground-and-pound. While Bollinger was able to return to his feet on a number of occasions, he often found himself right back on the canvas moments later.