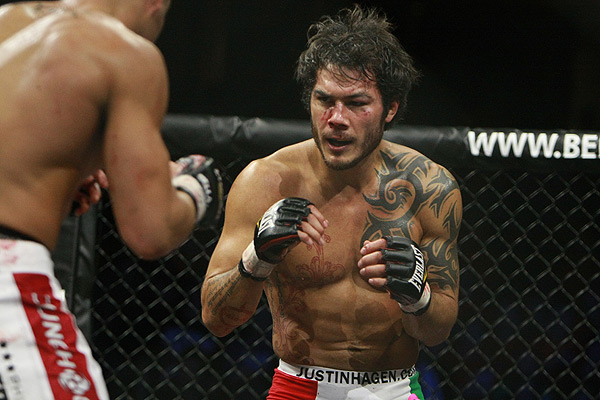 Previously regarded as one of the UFC's most exciting lightweight talents, Roger Huerta has seen most of the wind taken from his sails in the last four years.

Following six straight Octagon victories from September 2006 to December 2007, “El Matador” sustained a pair of decision defeats to Kenny Florian and Gray Maynard before exiting the promotion in 2009. The 29-year-old has since posted a 1-3 record, most recently suffering a technical knockout at the hands of fellow UFC vet War Machine this past November.

Now, Huerta looks to turn the tables on his skid as a member of the One Fighting Championship roster. Huerta, who signed a three-fight deal with the Singapore-based promotion, will debut for One FC on June 23 against Brazilian jiu-jitsu ace Zorobabel Moreira in the ”Destiny of Warriors” co-headliner. The event takes place at Stadium Negara in Kuala Lumpur, Malaysia, and the evening's main draw streams live on pay-per-view on OneFC.com immediately following the free four-fight undercard stream.

Huerta was originally expected to face Phil Baroni at the event, but “The New York Bad Ass” was forced off the card after suffering a June 2 technical knockout defeat. As a result, Huerta will now contend with Moreira, who won the 2005 World Jiu-Jitsu Championship in the brown belt division before later receiving his black belt from Carlos Gracie Jr. Though Huerta acknowledges the Brazilian's considerable grappling pedigree, he also readily admits that Moreira has greatly improved his standup in his recent bouts, particularly in his March 31 submission victory over Felipe Enomoto.

“[Moreira] is a really tough opponent. When you see his last fight, he basically won standing with a lot of teeps and a lot of leg kicks and ended up wearing and tearing Enomoto [before] he finally got him down. That shows to me that he’s really tough and durable,” Huerta recently told Sherdog.com. “I think 'Zorro' is on a level with the guys I am used to competing with. I’ve got to take him seriously. I respect him, and I respect his skills.”

In Moreira, Huerta faces one of the tallest opponents of his pro career. A natural lightweight standing 5 feet 9 inches tall, the Texan says he plans to use his sometimes wild offense to make up for the six-inch height disparity and draw Moreira into a firefight at point-blank range.

“It’s important for me to get on the inside and turn it into a brawl. That’s how I fight. I come in strong. My nickname is ‘The Matador,’ but I fight more like a bull than anything. I know that I’m going to have to take a few to get in, so I’m expecting that,” Huerta said. “I don’t think he has ever been in that sort of a fight before, and I hope it’s a problem for him. I’m going in there 100 miles per hour, and if 'Zorro' keeps up, it will be 'Fight of the Night' or 'Fight of the Year,' potentially. But if he can’t keep up, he is going to reach a breaking point, and then I will finish him.”

Though Huerta and Moreira will compete at 170 pounds come fight night, both men are eying the top spot in the One FC lightweight division. Nevertheless, Huerta believes that the lack of a weight cut in his upcoming bout might work to his advantage.

“After this fight, I will go down to 155. [Fighting Baroni at welterweight] was presented to me, and so I started eating a lot more, and then I got the call to see if I could do it lower. I said no, because I had been training for 170,” said Huerta. “I’m not going to be cutting any weight. I hope that’s going to help me to fight at a faster pace, but I got older, too, so we’ll see. I’m not going through the stress of trying to make weight, so all my energy is focused on beating [Moreira]. The training has been just as intense, but I get to eat the calories. I’m focused. I’m nervous. I’m scared. I’m not going to say I’m not. This is a fight, and I've got win. I have to.”

Huerta hopes his fight with Moreira will launch a new chapter in his career and put his recent losses behind him, signaling a return to the form that made him a fan favorite during his days in the Octagon. To do that, Huerta says he must leave everything he has inside the cage on fight night.

“I am looking at this as the first stepping stone toward getting back to where I was before,” said Huerta. “[This fight is] an iceberg, and I need to break through. I can’t save anything for the swim back. I’m going all out.”