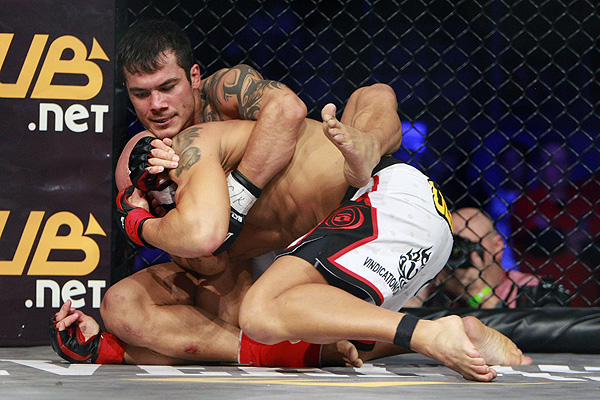 
HOLLYWOOD, Fla. -- Roger Huerta submitted undefeated Chad Hinton with a kneebar 56 seconds into the third round at Bellator Fighting Championships 13 at the Seminole Hollywood Hard Rock Hotel and Casino, advancing in the promotion’s lightweight tournament.

In the co-main event, Huerta, who passed on a renewal contract with the UFC in January 2009, and Hinton started the bout dancing around until they clinched. Huerta landed knees and punches and then connected with a left hand, but later ended up giving his back to Hinton on the ground. Hinton took advantage of Huerta’s position and worked for a rear-naked choke, but Huerta slipped out. Huerta landed a flurry of punches right before the bell.

In the second round, Huerta took Hinton down with a double-leg and landed a heavy right hand and hammerfist. In the final round, Huerta pulled a reversal that amazed the crowd and led him to victory. Huerta, who was the first mixed martial artist to appear on the cover of Sports Illustrated, used the reversal to transition into the fight-ending submission.

Huerta will move on to the semi-finals for a shot at the Chicago-based promotion’s champion Eddie Alvarez.

Dave Mandel/Sherdog.com
Karakhanyan (left) vs. Quach.
Meanwhile, Georgi Karakhanyan defeated Bao Quach at 4:05 into the first round, knocking Quach out with a vicious right knee that left his foe out cold. Karakhanyan was the first featherweight to advance in the promotion’s 145-pound tournament, and will vie for a chance to face champion Joe Soto.

Quach bled early from a cut above his left eye after taking a couple kicks and knees from Karakhanyan. Quach tied up Karakhanyan and dragged him to the floor, but couldn’t keep his opponent on the mat. Karakhanyan, a product of the California-based Millenia gym, took advantage and landed a damaging right knee, then returned to pounce with punches, signaling the referee to step in.

In another lightweight bout, Greg Jackson protégé Carey Vanier defeated Joe Duarte by technical knockout at 4:14 into the third round.

Duarte stepped into the bout on five days’ notice for Janne Tulirinta, who had visa issues. Duarte, a former U.S. Army Ranger and Purple Heart honoree was game, but Vanier was ready. From the clinch, Vanier attacked Duarte’s body with a right hand. Duarte attempted to sink in a weak guillotine attempt, but was no match for Vanier. Varnier took the reigns from there, battering Duarte with punches throughout before coaxing out the stoppage in the third round. 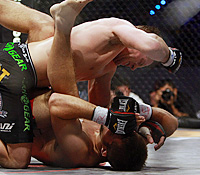 Averting two submission attempts in the first round, Warren easily took Marriot down in the second. Marriot continued to search for submissions from his back, while Warren landed minimal damage from above.

In the third round, Warren landed a kick to Marriot’s gut, before taking him down again. Marriot worked for an armbar, but Warren slammed out. Warren was awarded 30-27 marks across the board.

Bellator’s second season continues on April 15 at the Chicago Theatre in Chicago.