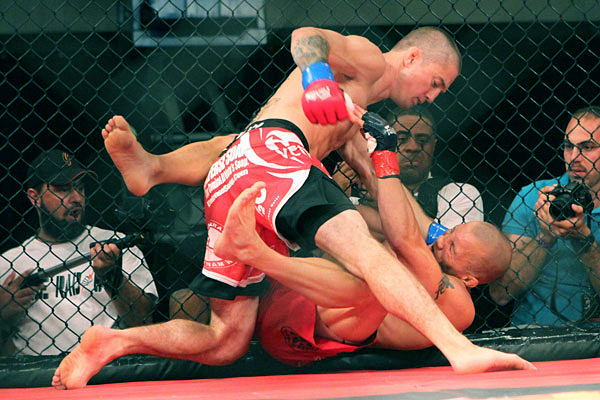 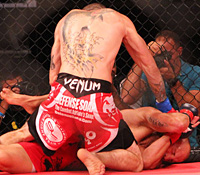 Jeff Sherwood
Loveland teed off on Olson.
Casey Olson had high hopes, and it did not take Ian Loveland long to ruin them.

Loveland stopped Olson on a first-round head kick and follow-up punches, as he kept his hold on the Tachi Palace Fights bantamweight crown in the TPF 14 “Validation” headliner on Friday at the Tachi Palace Hotel and Casino in Lemoore, Calif. Olson’s night was done in a little more than half a minute -- 38 seconds to be exact.

Based in Portland, Ore., Loveland wobbled the challenger with a crackling left hook and never relented. Soon after, he belted Olson with a kick to the face, followed him to the mat and finished it with a series of strikes, forcing referee Jason McCoy to intervene.

The 29-year-old Sports Lab export has rattled off nine wins in 11 appearances, losing only to Joseph Benavidez and Yves Jabouin inside the UFC in that span. 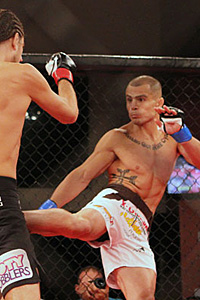 J. Sherwood
Karakhanyan sailed against Miller.
In the co-main event, Georgi Karakhanyan cruised to a unanimous decision over American Top Team’s Micah Miller, as he retained the Tachi Palace Fights featherweight championship. All three cageside judges scored it for Karakhanyan: 50-45, 50-45 and 48-47. The 27-year-old Millennia MMA representative has won five fights in a row since being cast aside by Bellator Fighting Championships.

The 25-minute bout proved rather uneventful in terms of action, but Karakhanyan closed the stronger of the two. He threatened Miller with a guillotine choke in the third round, scrambled into dominant positions in the fourth and worked effectively inside his opponent’s guard in the fifth, racking up points with short strikes against the grounded WEC veteran.

Miller did his best work in round two, as he utilized the clinch and attacked Karakhanyan with standing elbows and knees in close quarters. However, he could not carry over his momentum and faded down the stretch. The setback snapped Miller’s streak of three straight wins. 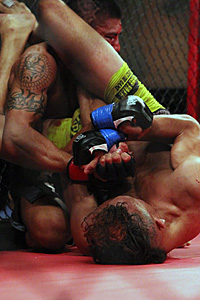 Fili nearly finished it inside round one. He blasted Wallace with a two-punch combination and backed it up with a double-leg takedown. From there, Fili moved towards his opponent’s back, unleashing a hellacious stream of punishment many believed warranted a stoppage.

Referee Marcos Rosales, who drew criticism for his officiating for much of the night, thought otherwise and allowed it to continue.

Wallace never recoverd, and Fili capitalized in the second round. After another takedown, Fili snatched a limb and went belly-down with the armbar. Rosales stepped in despite the absence of a tapout and called a stop to the bout. 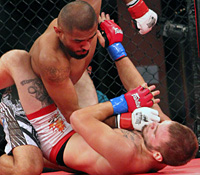 J. Sherwood
Arciniega has won five straight.
Elsewhere, a takedown-heavy approach carried Art Arciniega to his fifth consecutive victory, as he eked out a contentious split decision over Brad McDonald at 145 pounds. All three cageside judges scored it 29-28, two of them in Arciniega’s favor.

The 30-year-old Arciniega struck for takedowns in all three rounds, countered effectively at times and withstood McDonald’s advances on the feet. He has not tasted defeat since he dropped a unanimous decision to Chad Mendes in April 2009.

Finally, World Extreme Cagefighting veteran Poppies Martinez submitted Jason Drake with a first-round heel hook in their lightweight showcase. Winless in his last four appearances, Drake asked out of the match 1:48 seconds into round one.

Martinez used his inexperienced opponent’s aggression against him, as he caught an ill-advised kick and dragged Drake to the ground. After a brief struggle and some mild ground-and-pound, Martinez absorbed an upkick, dove back into Drake’s guard, postured up and snatched an exposed leg. Moments later, Drake conceded defeat. Martinez has won six of his past nine bouts. 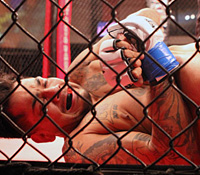 J. Sherwood
Martinez took out Drake.
In other action, Rolando Velasco rendered Antonio Duarte unconscious with a guillotine choke 2:57 into the first round of their bantamweight affair; Team Alpha Male’s Anthony Avila extended his winning streak to eight fights, as he submitted Sergio Quinones with a guillotine choke 3:03 into their featherweight scrap; King of the Cage veteran Angel DeAnda put away Drew Montgomery with punches 4:30 into round one of their light heavyweight encounter; Alex Perez won for the third time in as many outings, as he coaxed a tapout from Javier Galas with a rear-naked choke 97 seconds into their duel at 140 pounds; Reaper Muay Thai’s Zeth Martin stopped David Bollea on punches 59 seconds into the second round of their welterweight battle; and Bellator veteran Jessica Rakoczy recorded her first professional victory, as she knocked out Kristen Gatz 2:19 into round one.