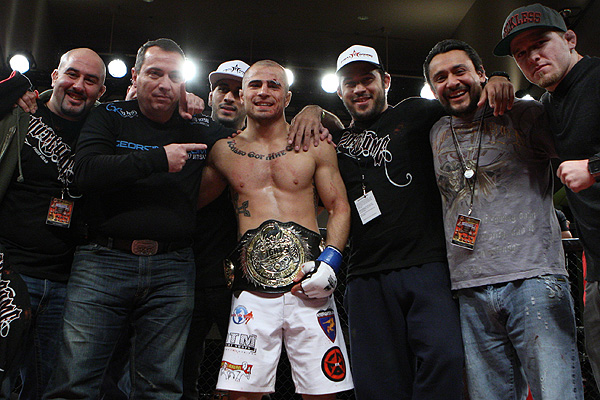 Tachi Palace staple Poppies Martinez will also be in action against Jason Drake at the Sept. 7 event, as will prospect Brad McDonald, who will square off with Art Arciniega.

Loveland, 28, won the Tachi bantamweight strap on May 10, knocking out Alexander Crispim with a devastating first-round knee. The win followed two tough defeats for Loveland in the Ultimate Fighting Championship, as “The Barn Owl” was outpointed by current flyweight title contender Joseph Benavidez and then WEC vet Yves Jabouin to close out last year.

Olson rides a three-fight winning streak heading into his showdown with Loveland, stumbling just once in his last eight fights. “The Underdog” last competed on March 9, outpointing Cody Gibson at TPF 12 in his first in-cage appearance in nearly two years.

A two-time Bellator tournament veteran, Karakhanyan, 27, has won four straight fights since exiting the Bellator cage. The Russian-born fighter won the TPF featherweight title back in December by submitting Isaac DeJesus and was scheduled to defend the belt against Miller at TPF 12 in March before withdrawing from the contest due to illness just hours before it was to begin.

Miller, meanwhile, has not competed professionally since December 2010, though he did try out for Season 14 of “The Ultimate Fighter.” Regarded as an early favorite heading into the season, Miller was upset by future UFC talent Steven Siler in the qualifying round via submission. The American Top Team rep is a four-time WEC veteran and owns 14 of his 17 career wins by either knockout or submission.