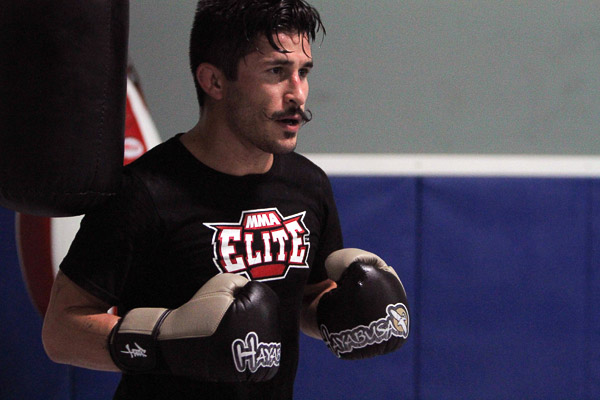 Ian McCall is creeping back into the UFC flyweight title picture. | Jeff Sherwood/Sherdog.com

However, speaking to Sherdog.com after his win over Brad Pickett at Saturday’s UFC Fight Night in Dublin, “Uncle Creepy” said he will be happy to fight once more before taking a shot at champ Demetrious Johnson, if that is how the UFC wants it.

“Demetrious has got my belt,” said McCall. “I think, in the landscape of the division, I pose the biggest threat to his crown.”

With Johnson scheduled to meet Chris Cariaso at UFC 177, McCall mentioned another flyweight who picked up a big win last week, John Lineker, as a potential opponent.

“I think if I get a guy like Lineker next while he fights someone else... But, I am fine with fighting again [before a title shot]. I don’t mind. He’s fighting next month, so that’s enough time for us to get our act together.”

In his post-fight interview on Saturday, McCall called out the champion, making reference to Johnson “laid out on the mat... so sensual.” McCall struggled to pin down a reason for his choice of words.

McCall won a unanimous decision against Pickett, though some fans felt it was a closer fight than two scores of 30-27 implied. No real controversy surrounds the decision, though, and McCall himself feels he was clearly better.

“I felt like I won. I dominated the whole fight, every aspect of it. Like I said from the beginning, speed kills in this division,” McCall said. “Brad... y’know, he’s a 135er. I think the weight cut killed him, and the speed advantage that I had just completely killed him... He is bigger, but I don’t feel like he was any stronger. I don’t know if that was from a heavy weight cut or what. He looked like he was having a hard time all week.”

That last line implies McCall was keeping a close eye on his opponent in the run-up to the weekend’s festivities. The Californian confirmed that was the case and hinted that, during the staredown at the weigh-ins, Pickett might have given some sign that his confidence was not total.

“You’re always picking up on stuff. When all the fans ask for you for a staredown photo, I always stare right in their eyes and make them uncomfortable. You try to mess with a person and mentally break them,” he said.

“[Fans] will usually look away, but it would be rare for a fighter to do that. That is not an easy job at this level, to try and mentally break someone. You can find chinks in their armor but you can never completely break someone.”

McCall now returns to his native California to await news of his next bout. In the meantime, he will be booking himself in for surgery to address a long-running issue with his right index finger, which was heavily bandaged after the Pickett fight.

“Basically, my hand doesn’t really close, and it hasn’t for the last year,” he explained. “My knuckle is stuck. I turn my punches over and bounce [my knuckles] off my training partner’s foreheads, and I started to develop bursitis in my knuckle.

“It swells up, my whole finger swells up and makes closing my hand even worse, but I would never say it hinders my fight. It’s just finger pain; it’s just temporary. That type of injury is not going to affect me, or most guys. If it does, you’ve got a problem.”

On a timeline for his return to action, McCall said, “I’ll fight in November maybe, because I am probably going to have surgery on this [finger].”