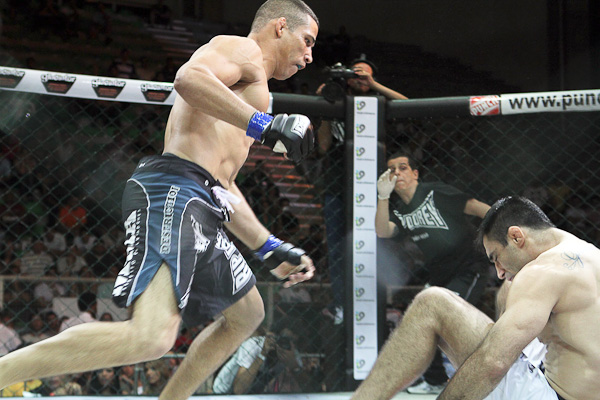 
M-1 Global earlier today announced a stacked card in its M-1 Challenge series to be held on June 6 in Ingushetia, Russia. The main event of M-1 Challenge 58 “Battle in the Mountains 4” will be a tussle for the vacant welterweight title between Igor Fernandes and Murad Abdulaev.

Fernandes, a rugged Brazilian who has won six consecutive fights, will be making his M-1 debut when he takes on Abdulaev. Fernandes (18-6) is a submission specialist and will look to keep his unbeaten streak alive against the Russian, though he has been inactive for the past two years. Abdulaev (14-3-1) is an all-around solid fighter who has split his last two bouts under the M-1 banner, but has won 10 of his last 11 fights.

The M-1 welterweight strap was vacated last year when Rashid Magomedov left the organization. Anchoring the main event will be a pair of potentially thrilling featherweight skirmishes: American Lee Morrison is set to lock horns with Ukrainian Pavel Vitruk while Antun Racic is slated to face Tural Ragimov. Morrison (13-5) is out to snap his current two-fight losing streak, both of which have come inside the M-1 ring. He’ll have his hands full against the tactical Vitruk (12-1), who is expecting to bounce back from his first ever loss as a professional.

Croatia’s Racic, meanwhile, has won four straight and will fight for the first time for M-1 in three years. “Killer” (17-5) has submitted his opponent in all but four his bouts and hopes to do the same against Ragimov (9-2). As for Ragimov, a native of Azerbaijan, he had won five consecutive battles, but came up short in his last match; he is looking to get back on track with a win.

The entire M-1 Challenge 58 card will be streamed live in HD on www.M1Global.TV.

According to M-1 Global, Fight Network will air M-1 Challenge 57 live on Cablevision's Optimum TV, Grande Communications, Shentel Cable and Armstrong Cable in the U.S., as well as nationwide in Canada, Roku devices across North America, and globally in more than 30 countries throughout Europe, Africa and the Middle East.