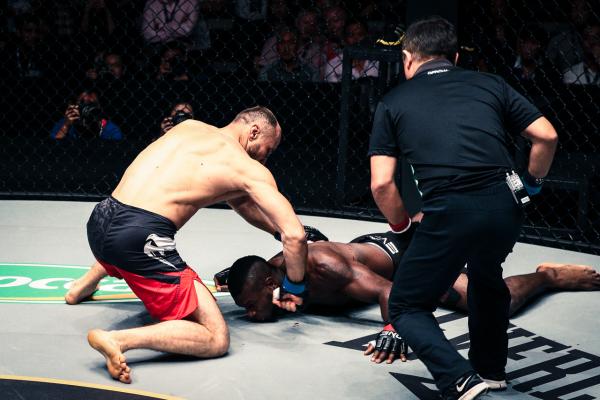 One Fighting Championship crowned a new champion Friday at One FC 22. | Photo Courtesy: One FC


One Fighting Championship has crowned its first middleweight king.

Kazakhstan’s Igor Svirid put away Evolve MMA representative Leandro Ataides with first-round punches to win the vacant 185-pound title in the One FC 22 “Battle of Lions” main event on Friday at Singapore Indoor Stadium in Kallang, Singapore. Ataides (8-1) succumbed to the blows 17 seconds into round one, falling from the ranks of the unbeaten in dramatic fashion.

A virtual unknown entering the match, Svirid (10-1) dropped the previously unbeaten favorite with a short jab inside the first 10 seconds, swarmed with follow-up punches, sprawled out of a desperate takedown attempt and then closed the deal with a hammerfist and a pair of right hands. 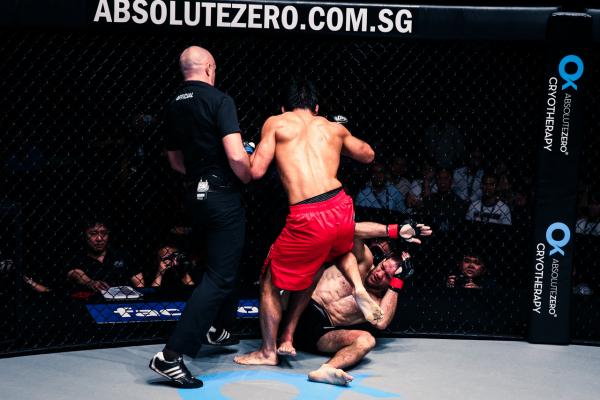 (+ Enlarge) | Photo Courtesy: One FC
Ando put away Moreira late.
In the lightweight co-feature, Sengoku alum Koji Ando picked up his fifth straight win, as he dispatched the returning Zorobabel Moreira with late third-round punches and soccer kicks. The end came 4:21 into round three, with the Brazilian at Ando’s mercy at the base of the cage.

Ando (11-3-2) wore down the Brazilian with a flurry of lefts and rights before meeting him with a pair of fight-ending soccer kicks after he collapsed to the canvas. Moreira (7-3), who had not fought since October 2012, did not have enough in the gas tank to deal with the high-volume attack his opponent brought to bear. 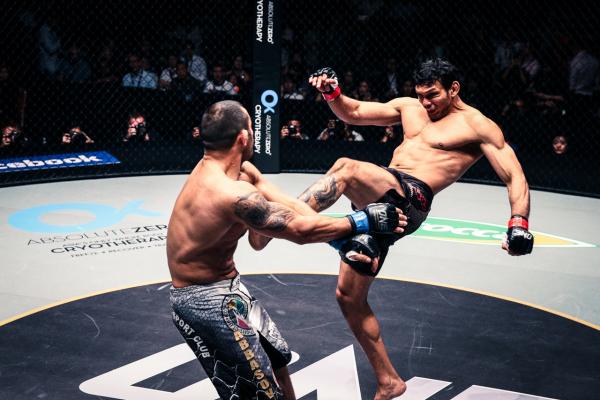 (+ Enlarge) | Photo Courtesy: One FC
Santos put a beating on Abbasov.
Meanwhile, Luis Santos stopped Bakhtiyar Abbasov with a first-round knee strike to the body in a featured welterweight confrontation. Abbasov (12-4), the man who welcomed Ben Askren to the One Fighting Championship cage in May, folded and submitted 53 seconds into round one.

Santos (61-9-1) sent out probing leg kicks and a left hook before countering an attempted takedown from the Azerbaijani with a perfectly placed knee to the midsection. Abbasov collapsed in visible agony, clutched at his ribs and asked out of the match.

The 34-year-old Santos has finished seven consecutive opponents since dropping back-to-back bouts to Ben Saunders and Ryan Ford inside the Bellator MMA organization. 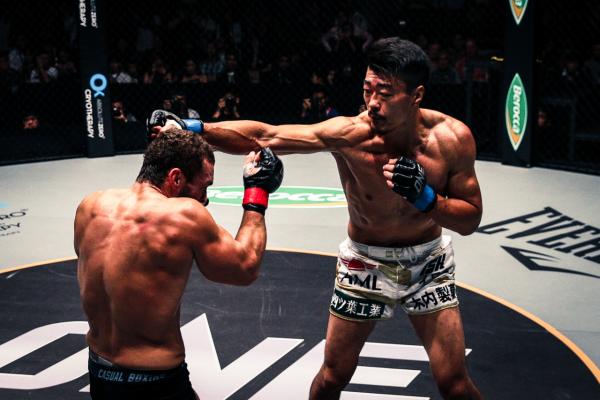 Stout clinch and takedown defense, superior striking and a handful of attempted submissions lifted the Japanese journeyman on the scorecards. Following a slow start, Mizuno (13-10) took control of the match. A finalist in the 2010 Dream light heavyweight grand prix, he countered repeated clinch and takedown attempts from Rafiq (8-4) with close-quarters knees to the body.

At a distance, Mizuno kept the Frenchman at bay with repeated kicks to the body, fatigue becoming more and more of a factor as the fight waded into deeper waters.

Finally, Evolve MMA’s Amir Khan (2-1) knocked out Waqar Umar (3-2) with a pair of standing elbows 85 seconds into the first round of their featherweight encounter; Belgian export Christophe Van Dijck (7-1) struck Dwayne Hinds (10-1) into submission with punches 2:40 into round one of their welterweight pairing; Australian Martin Nguyen (4-0) improved his perfect record, as he submitted Rocky Batolbatol (5-1) with a rear-naked choke 2:10 into the second round of their battle at 145 pounds; Juggernaut Fight Club’s Major Overall (6-1) needed just 29 seconds to tap Cary Bullos (7-2) with a rear-naked choke in their brief featherweight tilt; Taiwan’s Jeff Huang (5-1) submitted Zuli Silawanto (6-9) with a rear-naked choke 3:10 into the first round of their welterweight clash; and Kirstie Gannaway (1-0) submitted Adek Omar (0-1) with an armbar 2:34 into round one of their women’s atomweight scrap.