Returning to action for the first time in just over two years, and fighting in his hometown of Corpus Christi, Texas for the first time in over seven years, Ultimate Fighting Championship veteran Narvaez scarcely had the chance to land a strike. In an early exchange, Villanueva rocked Narvaez with a short left, dropped him with a right and pounced with punches to the head of the turtled Narvaez until referee Frank Collazo was forced to intervene, awarding the 28-second TKO, and vacant Fury FC light heavyweight title, to Villanueva. 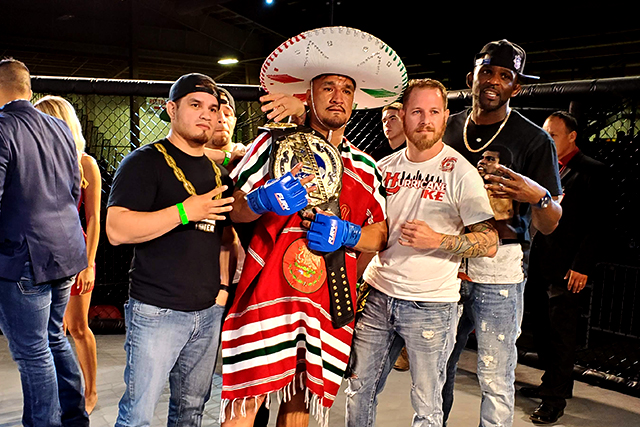 
With the win, “Hurricane Ike” moves to 15-9, and already has a presumptive first challenger in the person of UFC veteran Rashad Coulter, who was present in the arena and entered the cage to express his desire to fight for the title. Narvaez, having suffered the first back-to-back losses of his career, retired from competition in his post-fight interview. 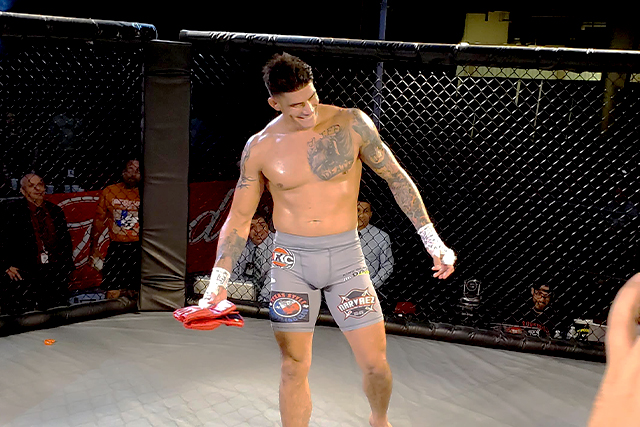 Roger Narvaez leaves his gloves in the cage in his hometown of Corpus Christi (Photo Credit: Ben Duffy/Sherdog.com)


The other half of the title doubleheader was less clear-cut, as Victor Martinez defeated Nico Echeverry by TKO at 31 seconds of Round 2. After a first round characterized by wary exchanges on the feet and several stretches of ground fighting in which Echeverry took dominant positions and looked for chokes, Martinez floored Echeverry early in the second with a sharp right-hand counter. Referee Collazo dove in instantly as Echeverry sprang up, apparently no worse for wear. The crowd voiced its displeasure, but whether the stoppage was a righteous reaction or an early intervention, “The Brick” is now 11-4 and the new Fury lightweight champion. 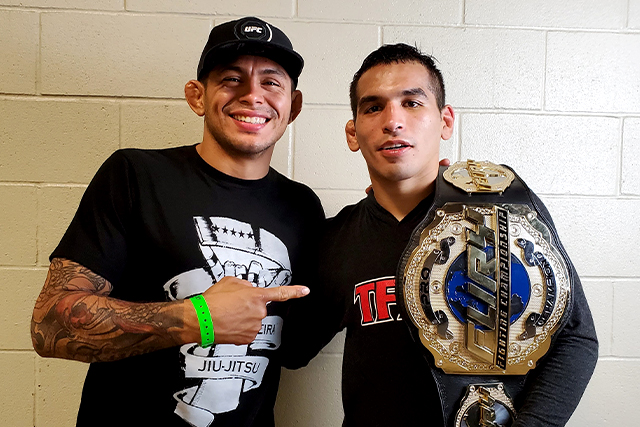 
With five straight wins on his ledger and his visibility as a teammate, protégé and cornerman of UFC lightweight contender Diego Ferreira, the 28-year-old’s stock has never been higher. Echeverry moves to 7-3 and sees a personal best three-fight win streak snapped in disappointing fashion.


In the second of two straight bouts pitting San Antonio’s Ohana Academy against the Rio Grande Valley’s Team Ferreira, Allen Gabriel Silva was all over Patrick Ferguson, serving up a three-round grappling clinic. Silva grounded Ferguson in all three rounds, spending over half the fight in back control, often with a tight body triangle locked on as Ferguson was forced to defend himself from an array of chokes, armbar and kimura attempts. After 15 minutes, all three judges awarded all three rounds to Silva, giving the Team Ferreira bantamweight prospect his fourth straight win and running his overall record to 5-3. With the loss, Ferguson is now 1-1 since turning pro earlier this year.


Ohana Academy’s Justin Governale used strength and pressure to take a clear but hard-fought unanimous decision over Stephen Perez in their featherweight feature bout. The obvious turning point of the fight came in the first minute of Round 2, when a shoulder strike against the cage by Governale smashed the nose of Perez, which immediately began to bleed profusely. Perez never wilted or faded, but the distraction -- as well as the optics -- of the busted nose clearly affected the course of the fight. Governale (7-6) won by unanimous 30-27 scores, giving him a second straight win and putting a tough four-fight losing streak further in the rear view. Perez (5-4), in his first fight outside South Texas Fighting Championships, snaps his own two-fight win streak.


Christopher Cuadra (2-2) made short work of Joe Saucedo (3-7) -- once the action hit the canvas, at least. Cuadra was stung a few times in the early going, by a straight left and a low kick in particular, but once he changed levels for his first takedown, it was all one-way traffic. The lanky bantamweight pulled Saucedo away from the fence and moved smoothly to the back, whereupon he locked in a body triangle. Cuadra peppered Saucedo with a variety of strikes from back mount, including some hard back elbows from odd angles. Once Saucedo was sufficiently softened up, Cuadra applied a rear-naked choke that had his opponent tapping out in seconds, securing the submission win at 2:56 of the first round.

Rivera Holds On For Split Decision Win Over Hendricks


Bantamweight up-and-comer David Rivera (3-0) kept his professional ledger perfect with a close decision over Eric Hendricks (0-1), who made his professional debut on Friday after an impressive amateur run in which he went 3-0, with all wins by first-round stoppage. Both men had their moments in the first two rounds, both of which were closely contested and difficult to score. Hendricks came on strong late in the middle frame, but both men looked exhausted in the third, and neither one threatened a finish or put much of a stamp on the round. In the end, Rivera took the split decision via 29-28, 28-29 and 29-28 scores.


David Waters (5-4) put away David Miramontes (4-5) in a flyweight slugfest that was a lot of fun while it lasted. By halfway through the first round, both men were standing toe to toe, swinging with abandon and dripping blood. Shortly thereafter, the two hit the canvas, where after a series of scrambles, Waters took Miramontes’ back at the base of the fence. Waters quickly locked up a rear-naked choke for the finish at 3:53, to the roaring approval of his hometown crowd. The victory continues to right the ship for the streak-prone Waters, whose professional ledger to date consists of a three-fight win streak followed by a four-fight skid and now, two straight wins.


In the all-amateur preliminaries, Alfredo Benavidez defeated Jordan Mojica via second-round TKO in a battle of debuting lightweights; Isaac Moreno (3-0 amateur) needed only 39 seconds to blow up Rusty Turley (4-2 amateur) with kicks and punches in their welterweight matchup; and bantamweight Josh Walker (3-1 amateur) won for the second time in a month, taking a unanimous decision over Joshua Quintero (0-2 amateur).