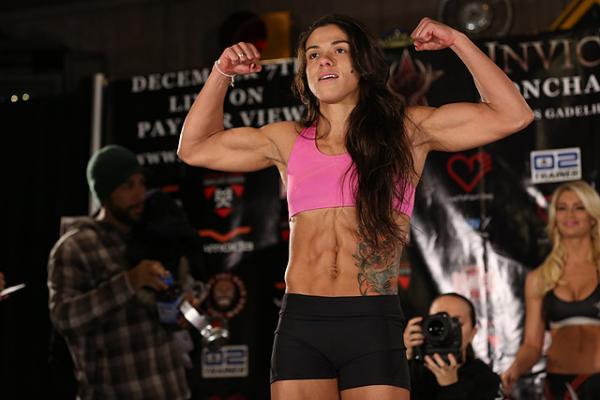 Claudia Gadelha will have to wait for her shot at gold. | Dave Mandel/Sherdog.com


Saturday night’s Invicta Fighting Championships event has lost one of three scheduled title fights, as illness has forced Claudia Gadelha to withdraw from her co-headliner opposite strawweight champion Carla Esparza.

“Claudia ran a high fever late Friday evening and went to the hospital, where she was diagnosed with a bacterial infection in her intestines,” Invicta President Shannon Knapp stated in a release. “We know Claudia wanted this title opportunity more than anything, and all of us at Invicta wish her a speedy recovery.”

Invicta FC 7 takes place at Ameristar Casino Hotel in Kansas City, Mo., and is headlined by a flyweight title showdown between reigning champion Barb Honchak and challenger Leslie Smith. The event streams live on pay-per-view at InvictaFC.com and will also see Lauren Murphy and Miram Nakamoto battle over the inaugural bantamweight title.

Gadelha, 25, has never been defeated as a professional, racking up 11 straight victories to begin her MMA career. “Claudinha” has stopped eight of her victims by either knockout or submission and last competed in July, when she made a successful Invicta debut against Jewels champion Ayaka Hamasaki.